Opening a tap is as easy as the proverbial counting to three. Actually, it is probably easier, as a quick turn of the tap gives us access to water for cooking, washing and drinking.

Water is not only a precious commodity, but a human right, as recognised by the United Nations General Assembly on July 28, 2010.

Yet whereas we normally associate lack of access to water to other continents, this is closer to home than we might think. Estimates by Right2Water – the first ever European Citizens’  Initiative to surpass the required one million signatures (and subsequently reaching almost two million) in seven member states  – show that currently, approximately two million people in Europe still lack access to suitable water for drinking and sanitation.

In addition, there’s an element of distrust in tap water. For instance, while 95 per cent of respondents said they used tap water for sanitation and 84 per cent for cooking, 55 per cent use it for drinking, while 10 per cent drink it after filtering it. Moreover, while 80 per cent said that they had good access to quality drinking water where they lived, only 20 per cent said they drank tap water when out of their country of residence.

The lack of trust in tap water is resulting in greater consumption of bottled water especially in plastic bottles – in fact, on average, every person in the EU consumes up to 106 litres of bottled water every year.

The economic cost of this consumption is significant – research by the European Commission has found that reducing the consumption of bottled water could help households in Europe save more than €600 million every year.

In addition to the economic cost, such high consumption of bottled water has a negative impact on the environment, as it contributes towards CO2 emissions and plastic waste.

This assumes greater significance when EU statistics show how every year, about 26 million tonnes of plastic waste are generated in the EU – of these, less than 30 per cent is recycled, while some is exported to non-EU countries for treatment. The rest is incinerated, goes to landfill or ends up uncollected on beaches or in forests, rivers and seas.

So bad is the situation that the EU is about to ban certain single-use plastics by 2021. Single-use plastics such as cutlery and straws – which are non-biodegradable products used just once and then thrown away – and fishing gear make up 70 per cent of marine litter in Europe. The legislation, which has just been approved by the European Parliament as co-legislator with the Council, also sets a collection target of 90% on plastic bottles by 2029. These will also have to consist of a minimum of 30% recycled content by 2030.

But how can the EU increase trust in tap water among its citizens?

Most people in the EU already have good access to high quality drinking water. According to a 2016 report by the European Environment Agency, more than 98.5 per cent of tests carried out on drinking water samples met EU standards. These standards are set by the EU Drinking Water Directive, which sets minimum quality standards for water intended for human consumption – drinking, cooking and other domestic purposes – in order to protect consumers from contamination.

On March 28, the European Parliament voted in favour of new rules to further improve the quality and access to drinking water for everyone, and ensure plastic waste from water bottles is reduced. These new rules - as part of the EU Plastics Strategy - call on governments to promote universal access to clean water, especially vulnerable groups with no or limited access and could reduce the consumption of bottled water by 17 per cent – less bottled water would help people save money and have a positive impact on the environment.

Apart from the associated economic cost, high consumption of bottled water has a negative impact on the environment

The new legislation also tightens the maximum limits for certain pollutants such as lead, or harmful bacteria, introduces monitoring on levels of microplastics, and enforces new caps for the most polluting substances found in tap water. The new rules also increase transparency and provide consumers better access to information.

The vote on this report, adopted by show of hands, closed Parliament’s first reading. However, EU ministers have not reached their position in time to open negotiations before the end of the European Parliament legislative term. Negotiations will therefore start in the new parliamentary term, following European elections in May.

Through these proposed new rules, which have received MEPs’ backing, the European Commission says that consumption of bottled water could be reduced by 17 per cent, less bottled water would help people save money and have a positive impact on the environment.

The proposed new rules also encourage member states to take measures to improve water access in cities and public places, by setting up free fountains where technically feasible and proportionate. They should also encourage tap water to be provided in restaurants, canteens and catering services for free or for a low service fee.

Citizens are less likely to consume bottled water if they are provided with better alternatives.

In Malta, tap water consumption is the lowest in Europe. According to European Environment Agency statistics, while the average consumption of tap water in the EU stands at 120 litres every day, in Malta, this stands at 50 litres. The highest consumption is in Italy, at 243, followed by Bulgaria (191 litres), Croatia (182) and Greece (177).

Low consumption of tap water in Malta is not due to low quality. A Water Services Corporation (WSC) spokesperson said that Malta’s tap water is in line with the Drinking Water Directive 98/83/EC and thus safe to drink. The spokesperson also said that local tap water – which is a mixture of groundwater and reverse osmosis product – is constantly being monitored to lessen any potential risks.

However, surveys conducted by the WSC shows that the preferred source of drinking water is, by far, bottled water.

The main reason for this, as most of the WSC survey replies cite, is due to the taste of the water itself. A concern, which the WSC is already addressing by implementing a major EU-funded project to improve the taste of tap water. With €150 million in funding, the ‘Towards a Net Zero Impact Utility’ project is the largest ever Cohesion Policy financing for a project in Malta.

In an interview with the Times of Malta last year, WSC CEO Richard Bilocca said the WSC was aiming to “revolutionise” tap water. The CEO said that while tap water is perfectly safe to drink, the salts in the water which come from the water table give it a taste which most people find unpleasant. This means the majority resort to bottled water.

During the interview, the CEO added that the WSC was planning to link the Pembroke reserve osmosis plant directly with the main reservoir at Ta’ Qali through a tunnel. Once at Ta’ Qali, the water would be blended with groundwater – increasing the share of the former – and then polished to remove the salts and give a “very noticeable improvement in the taste” in each household.

Despite consuming bottled water, respondents to a WSC survey said they were increasingly aware of the environmental cost this consumption carried.

Speaking last December during the signing of a memorandum of understanding between the government, private sector players and other stakeholders, to launch a new refund scheme for plastic bottles, scheduled to run by the end of this year, Prime Minister Joseph Muscat said that while 200 million drinking containers are put in the market every year in Malta, only a quarter were being collected for recycling. This was the context to government’s decision to collaborate with the private sector on the collection and recycling of plastic beverage bottles through the new refund scheme.

Also under way is ‘Towards a Net Zero Impact Water Utility’, a WSC project funded through EU Cohesion Funds. This investment aims to greatly improve the production and distribution of tap water in Malta. All the while, safeguarding the table water, increasing the quality of tap water and reducing greenhouse gas emissions.

If trust in tap water – and consumption – increases, everyone is set to gain benefits. Financially, consumers will be better off because, while one litre of tap water costs €0.002, that of bottled water is markedly higher. Moreover, the reduction of plastic bottles – and the associated emissions and pollution – will benefit the environment and consequently, our own health. 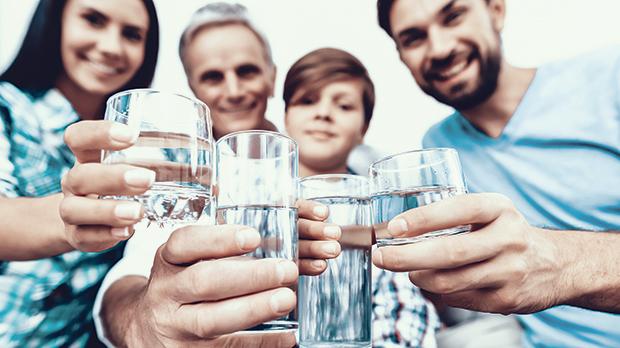 Drinking water in the EU

The European Union has a history of over 30 years of drinking water policy. This policy ensures that water intended for human consumption can be consumed safely on a life-long basis.

▪ Provide the consumers with adequate, timely and appropriately information.

▪ Contribute to the broader EU water and health policy.

Messages in a bottle

The average person in the EU consumes up to 106 litres of bottled water every year.

Lower consumption of bottled water can help households in Europe save more than €600 million per year.

Bottled water costs more than the €0.002 EU consumers pay for one litre of tap water.

Plastic bottles are one of the most common single use plastic items found on European beaches. The European Parliament will phase out the use of all plastic water bottles and other single-use plastics from its building. The catering outlets in Parliament will also phase out plastic cups, cutlery and other items, replacing them with biodegradable or recyclable ones. This phasing out will start in July and is in line with the EU drive towards a circular economy and plastic waste strategy.

One of the objectives of the 2016 Paris Agreement is to reduce the consumption of bottled water, estimated to go down from 100 to 88 litres per year by 2050. This can reduce greenhouse gas emissions by 1.2 million tonnes of CO2.

A service brought to you by the European Parliament Office in Malta.