Anton Zeilinger is one of the world’s leading experts on teleportation but he will not beam you up any time soon.

That, he insists, is still in the realm of science fiction, immortalised by the TV series Star Trek. What he is actually doing, however, is nearly as fantastical. 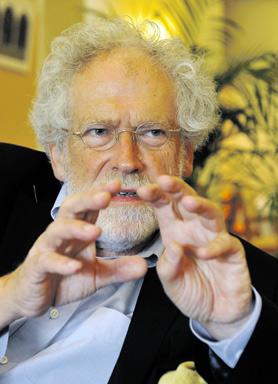 Anton Zeilinger – professor of physics at the University of Vienna and winner of the Newton Medal and the Wolf Prize in Physics – is in Malta to deliver a public lecture this evening. Photo: Chris Sant Fournier

Earlier, this year, Prof. Zeilinger led an international team of physicists in successfully teleporting “quantum states” between La Palma and Tenerife in the Canary Islands, a distance of 143 kilometres.

Effectively, the team extracted all the characteristics of one quantum particle – photons, atoms, quarks and the like – and transferred them across a vast distance to another particle.

Most notably, the feat opens the door to the creation of superfast “quantum computers”, theorised devices which would carry information on single atoms instead of silicon chips and process problems almost instantaneously.

“A modern computer is still in the same class of complexity as an abacus. All it’s doing is shuffling information around,” he says. “With a quantum computer, one atom can carry many different pieces of information at the same time. Different parts of the computer can be connected by entanglement [so actions performed on one particle immediately affect the other] and information can be transferred very quickly.”

Prof. Zeilinger estimates that a specific-purpose quantum computer, capable of solving mathematical problems well beyond the scope of current technology, may be as close as five years away. Tech giants like Google and Huawei, in fact, have already begun investing in the technology.

For Prof. Zeilinger, the next step is collaborating with the Chinese Academy of Sciences to launch a “quantum satellite mission”, which would allow for quantum communication on a global level – a “quantum internet”, if you will.

“What is most relevant is that there is no basic scientific reason why it shouldn’t work,” he says. “Throughout history, whenever this was the case, humanity always found a way to make it work.”

Prof. Zeilinger is in Malta to deliver a public lecture on his work this evening at the University campus in Valletta.

A professor of physics at the University of Vienna and scientific director of the Institute of Quantum Optics and Quantum Information at the Austrian Academy of Sciences, he was awarded the first Newton Medal by the British Institute of Physics and the 2010 Wolf Prize in Physics.

We are probably still missing basic ideas about the world; we have a fantastic mathematics that works but we cannot give a reason for why it works. And yet, everything depends on it

“I’ve always been driven by curiosity. Other people are driven by applications but if we only ever thought about applications there would be no foundations for future discoveries.”

He also acknowledges that quantum mechanics – which has led to ideas as extraordinary as the existence of multiple universes – also throws up a number of philosophical questions.

He has, in any case, at least one high-profile follower in the Dalai Lama, who once told him during a visit to his laboratory that if his ideas turned out to be correct Buddhism would have to alter aspects of its teachings.

“We are probably still missing basic ideas about the world; we have a fantastic mathematics that works but we cannot give a reason for why it works. And, yet, everything depends on it,” Prof. Zeilinger says.

“We have many interpretations of quantum mechanics and people fight each other over them. This debate indicates that something’s still missing and I hope I’m still alive when someone finds it.”

But he is not absolutely convinced that quantum mechanics is the answer at all. It is unlikely, he suggests, that after just 400 years of serious scientific enquiry, humanity could really have stumbled across the ultimate answer.

He does have at least one suggestion for how we could speed that process along: “We should build toys and simulations for children which work according to quantum principles, then see what they do with them.”

It sounds fantastic but he believes their minds are more open to these ideas than his generation was.

“Maybe one of them will come up with an idea that will change all the foundations.”