Two teenage students were rushed to hospital with food poisoning on Saturday after being served undercooked chicken while in quarantine at a Pembroke residential facility run by a language school.

The Slovakian girls, both 17 years old, were taken to Mater Dei Hospital by ambulance where they were diagnosed with gastroenteritis.

One of them, who later tested positive for COVID-19, was then separated from her 14-year-old sister, who is now quarantining on her own.

Their distressed mother says she is so worried she cannot sleep or eat as her daughters call her every night in tears.

The food poisoning case is the latest incident that raises questions about how underage foreigners are being cared for in Malta as they are held for two weeks far from their parents. 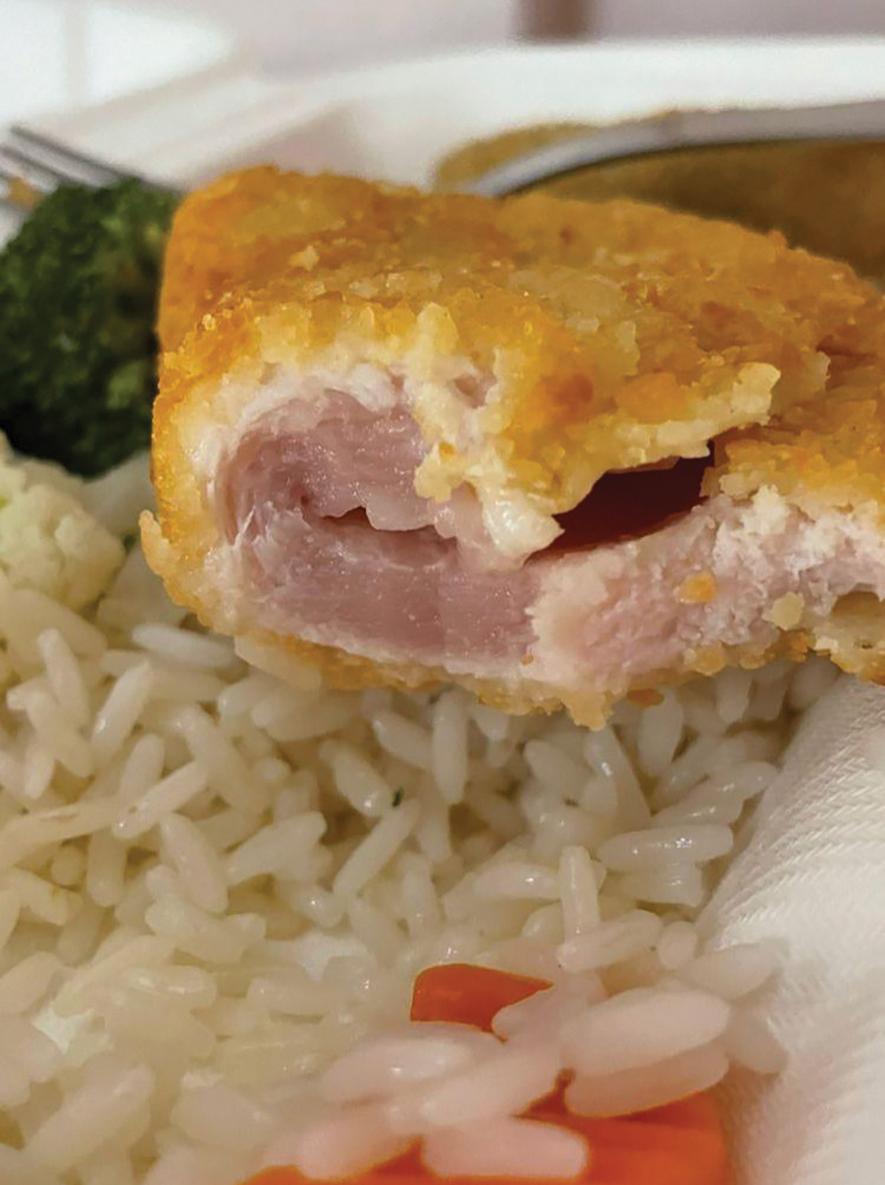 A portion of undercooked breaded chicken which Luisa and her friend ate before being hospitalised.

One of the teenagers, Luisa Ticha, told Times of Malta she only ate the breaded chicken because she was hungry “and it was the only thing they gave us”.

The language school, Sprachcaffe Languages Plus, admitted there was “an issue with the food”.

Luisa and her younger sister Laura, who is 14 years old, are among an undisclosed number of language students stuck in quarantine in Malta.

“I’m sad and disappointed at this truly upsetting situation,” Luisa said, “I never imagined I would end up quarantined,  much less in hospital.”

Luisa and Laura spent the first three weeks of their trip living the island dream, bettering their English, meeting new people and making friends, with “lots of fun activities” to keep them entertained.

But, on July 9, when one of the seven girls she shared an apartment with tested positive for COVID-19, the rest were told to quarantine, with little supervision or access to outside services.

Anyone who is identified by public health as a close contact of a confirmed case must quarantine for 14 days and risk fines of €3,000 for breaking the law.

None of the girls were tested for the virus.

“For me, that was a mistake because we didn’t know who was infected and who wasn’t, I only discovered I was positive because I was admitted to hospital.”

Then, on Friday, Luisa and her friend, another 17-year-old girl from Slovakia had to call an ambulance when they became ill after eating the undercooked chicken.

“When we tore it open it looked like it was raw. I wasn’t going to eat it. In fact, my sister didn’t want hers but I was hungry and it was the only thing they gave us,” she said.

“The day before, I thought I might have a mild fever but I put it down to sunburn. After eating the food I was in so much pain I was crying. I couldn’t stop vomiting.”

At hospital, Luisa was also diagnosed with COVID-19, meaning her quarantine will begin again.

Worse still, she was separated from her 14-year-old sister, who is now alone in an adjacent apartment.

I feel like I’m in prison, It’s so depressing. There are bars on the windows and I’m all by myself

“I feel like I’m in prison, It’s so depressing. There are bars on the windows and I’m all by myself and, even worse, so is my sister.”

Pictures from the girls’ living quarters show rubbish left piled in bins. Cleaning staff are not permitted to enter their apartment to clean.

While Sprachcaffe told Times of Malta it had provided the teenagers with mops and cleaning material and was collecting their laundry every two days, the level of cleanliness in the apartment left much to be desired, with dust and paint chipping onto their beds, broken toilets and hair found in their fridge.

Luisa and Laura’s distraught mother, Barbara said she is begging the school to let her daughters stay together until it’s safe to bring them back home.

“They are both very depressed but, at least, together they will have a shoulder to lean on and help each other. I know it is risky for their health but their mental health is also greatly suffering,” she told Times of Malta.

“I am crying myself to exhaustion every night. I cannot sleep or eat with worry. My daughters call me in tears and I don’t know how to help them. I don’t know what to do,” she says, her voice straining with emotion.

When contacted, Sprachcaffe accommodation manager Philip Plancey said that Luisa and Laura had been moved to two adjacent studio apartments yesterday to be closer to each other but could not be allowed to stay together.

Asked about two of the girls contracting food poisoning, Plancey said that the students are given three meals a day and “was aware there had been an issue with the food which resulted in hospitalisation”. No further comment was offered on the matter.

Neither the health ministry nor the tourism ministry responded to questions from Times of Malta.