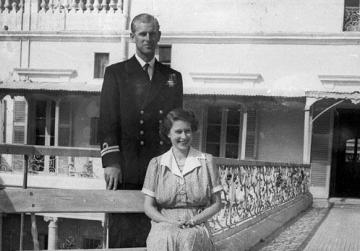 Princess Elizabeth and Prince Philip at the villa in 1949.

The large villa that Queen Elizabeth had lived in during her stint in Malta during World War II is crumbling and should be restored before the royal visit later this year, according to a conservationist NGO.

“This villa not only has immense architectural value, but is the only property outside of the UK which the Queen has called home. It should not be left in this state. We must save it,” Flimkien għal Ambjent Aħjar spokeswoman Astrid Vella told a press conference on the villa’s front steps.

The property, Villa Guardamangia is a stone’s throw from St Luke’s Hospital and is a late baroque building dating back to the mid-1700s.

It is best known, however, as the house Princess Elizabeth had stayed in between 1949 and 1951 with her husband Prince Philip, who as a naval officer  was stationed in Malta.

Ms Vella said Queen Elizabeth had actually asked to see the property when she last visited Malta in 2007; however, the owners refused.

“If she asks to visit this property again, it shouldn’t be in this state,” she said.

The baroque masonry of the building’s front facade is visibly crumbling, and the wooden apertures and iron work are also weathered.

Ms Vella said the planning authority was obliged to ensure owners of protected buildings, such as this, maintained their property.

According to the Development Planning Act, the authority is legally empowered to force property owners renovate the buildings. Not doing so should see the authority intervene by carrying out restoration works at the cost of the owner.

During the press conference the manager of the planning authority’s heritage planning unit, Joe Magro Conti, who happens to live a few doors down, was seen. However, when asked by The Sunday Times of Malta why the property had been allowed to fall into disrepair, he declined to comment – saying only: “Why don’t you ask Astrid”.

Ms Vella made an urgent appeal to the government to intervene and ensure that the property was salvaged before the royal visit scheduled during the Commonwealth Heads of Government Meeting in November.

A government spokesman said negotiations had taken place for the property to be bought by the State and surveys had been carried out. The talks, however, fell through when the owners would not reduce the asking price, the spokesman added.

During the press conference, the property owner, who preferred to remain anonymous, was also seen peering from behind one of the broken wooden shutters. Asked for a reaction to Ms Vella’s appeal, the owner shook her head in disapproval, saying that she had already tried countless times to find help, to no avail. Ms Vella extended her appeal to other buildings of national heritage significance, which she said were often “intentionally” allowed to fall into disrepair by owners.

“Every time we lose one of these properties to a block of apartments or some other new development, we lose a gem,” she said. She said the government should extend its recent efforts to reacquisition large historical privately-owned buildings.

She also called for the setting up of a fund, to help home owners restore facades, balconies and masonry, which was often too expensive to maintain for those who own them.