Slices of pork laid inside copies of the holy book, according to photos posted to Facebook by the Islamic Community of Malta. 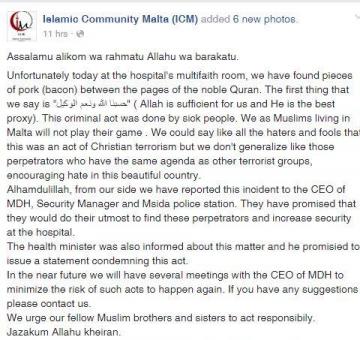 Vandals also left behind a printout featuring a photo of Father Jacques Hamel, a Christian priest whose throat was slit by Islamic State terrorists in Normandy earlier this week, under the heading 'Victim of Islam'.

The "act of degradation" happened at some point yesterday afternoon, the ministry said.

In a Facebook post, the ICM said that it would not fall for the perpetrators' bait and encourage hate in "this beautiful country".

"We urge our fellow Muslim brothers to act responsibly," the ICM added.

In a tweet, Archbishop Charles Scicluna also condemned the vilification, saying "not in our name".

The Health Ministry condemned the "cowards" who carried out the desecration, and expressed its solidarity with the Muslim community.

Hospital authorities have reported the case to the police.

In a statement this afternoon, the Ahmadiyya Muslim Community Malta categorically condemned the act.

It noted that it always condemned every act of extremism and terrorism, wherever and for whatever reason it was committed. The killing of Christian priest, Fr Jacques Hamel, in France, was also condemned by the community all over the world, it said.

The community said that the act of vilification of the Holy Quran at Mater Dei Hospital was an act of provocation and hatred and it was sad that the vandals also left a printout photo of Fr Hamel, under the heading ‘Victim of Islam’.

"We think that this is very irresponsible and unjustified statement. The truth is, Fr Hamel is not the victim of Islam, but he is the victim of some ignorant, hatemonger, hardliner and extremists people who claimed to be Muslims.

"But, their actions cannot be justified according to the teachings of Islam and the Holy Quran – the sacred book of Muslims."

Opposition leader Simon Busuttil condemned the attack in a tweet, while adding that "this is exactly why we wanted to keep religious vilification as a crime."

That comment provoked a response from Justice Minister Owen Bonnici, who expressed disbelief at Dr Busuttil's comments. "Can't believe you are politicising this issue," he wrote back.

Dr Bonnici followed that up with an official ministry statement issued on Sunday morning. In the statement, the ministry clarified that while the decriminalisation of religious vilification relaxed freedom of expression, hate crimes remained a "very serious" crime under Maltese law.

"One would expect the Opposition Leader to have avoided politicising such an important issue," the statement said.