Prison officials are being instructed to override a security feature embedded in x-ray scanners that warns them when inmates and visitors are being exposed to excessive levels of radiation.

Several sources told Times of Malta that the high-end scanners in the entrances of prison are equipped with AI that records the amount of radiation each person is exposed to and warns officials when the pre-set limit is reached.

When this happens, officials are instructed to enter a four-digit code (1585) that overrides the security feature, prompting the scanners to perform further x-ray scans without keeping record of each individual’s radiation intake.

"When the scanner detects that a person has reached the radiation limit, it ceases to perform scans," he said.

"But they use the code to cheat the software into taking more scans."

"Not only should they record radiation from the scanner; they should also have records of any radiation the inmate might have absorbed elsewhere, like in hospital, so they have a clear picture of how risky the scan will be."

In the video, Azzopardi also demanded an 'immediate investigation' into this practice.

"I have more information that I'm ready to present to whoever will do the investigations," he said.

While there is no evidence that x-ray radiation causes short-term health ramifications, excessive exposure is linked to increased risk of cancer.

Prison authorities are aware of the risks of x-ray radiation, so much so that wardens perform the scans from a separate room behind a lead shield, children and pregnant women are not allowed to be scanned, and signs on the doors to the scanners say ‘Danger – Radiation’. 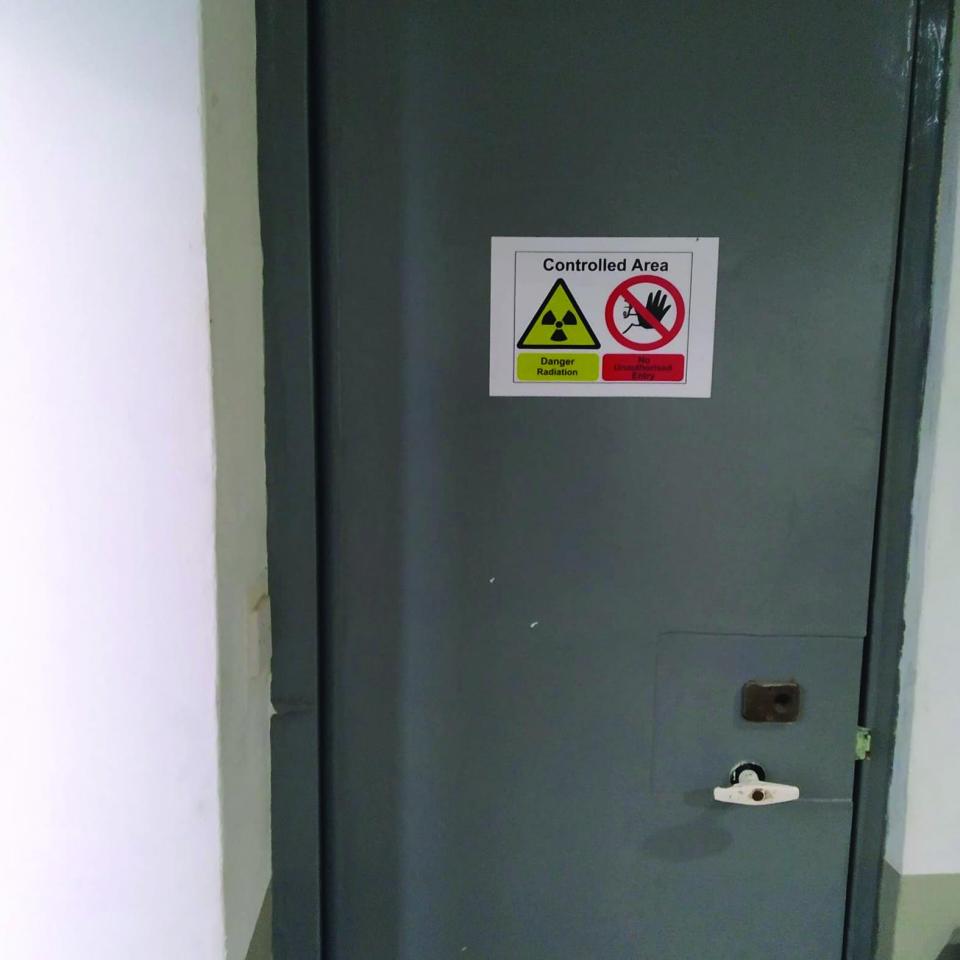 The door at the prison that leads to the x-ray scanner.

Prison authorities installed the OD Security Soter RS x-ray scanners in the facility’s entrances in 2018 as part of a massive clampdown on drug smuggling. Upon entering Corradino, each individual is asked to step on a platform and hold on to two railings while the machine moves them sideways as it takes a full-body x-ray scan.

The scanner then projects an image of the individual’s skeleton on a computer operated by the prison warden. Any piece of contraband hidden inside the body is revealed in the projected image. Drug smuggling in prison did, in fact, drop dramatically since the introduction of the scanners, but sources say inmates and their families are being exposed to undocumented, and possibly risky levels of radiation.

The Corradino Correctional Facility, then headed by Alexander Dalli, had purchased the scanners from a Netherlands-based company that specialises in security equipment. Questions sent to the company have remained unanswered, but the manufacturer claims the scanners are harmless because they emit very low x-ray doses.

Each scanner emits around two microsieverts per scan, which is considered a very low and harmless dose, but international regulations and Maltese law are very stringent on radiation exposure.

Maltese law states that a member of the public should be exposed to not more than 250 microsieverts per year from the same authorised practice.

In regulations published on the use of x-ray body scanners in prison, the UK Justice Ministry strictly prohibits x-ray scans on visitors and family members, and demands that each scan is fully justified, arguing that “the exposure may only occur when the benefit to the individual or society outweighs the health detriment that may be caused to the individual”.

UK policy says that for a scan to be justified, there must be “intelligence or reasonable suspicion that the prisoner in internally concealing contraband” and when “there are no other means of determining the suspected contraband, for example by means of a full or rubdown search”.

Before introducing the scanners in 2018, the government said the new equipment will diminish the need for searches and said it will make strip searches a thing of the past, because they are ‘inhumane’. But several inmates and visitors claim that upon entering prison, they were scanned as well as searched, and in some cases, they were even strip-searched after the x-ray scan.

Times of Malta sent questions to the prison authorities, asking why officials are instructed to override the system, how the prison keeps record of how much radiation each person was exposed to, how the prison justifies the amount of scans it performs, why some people are searched after the scan, and how the prison protects its wardens from radiation.

In their reply, prison authorities did not answer to any of the questions, but said: “The scanners use high-end technology which use the least possible dose of radiation. The system is monitored by the Radiation Protection Board, which is an independent entity, and each dosimeter worn by correctional officers is regulated by an independent expert who is also registered with the OHSA.

The system is monitored by the Radiation Protection Board, which is an independent entity- Prison authorities’ statement

“The scanners were installed to modernise the security system in prison and have helped eliminate the smuggling of drugs through the facility. Their use is crucial to maintain a drug-free environment for the benefit of prisoners and workers alike.”

In a reaction in the afternoon, the Nationalist Party called for an immediate explanation from Home Affairs Minister Byron Camilleri who, the party said, should also shoulder political responsibility and resign.

The minister should say if he knew about such abuse and when was he made aware of it, the PN insisted in a statement.

It pointed out that, in spite of the shocking stories coming out of the facility, including the death of 14 people, Camilleri continued to defend all that was wrong and that had taken place while he was responsible, dismantling all the good that had been achieved during the years.

The minister had not even sacked the former director, who instead, suspended himself, the PN noted.

It said political responsibility had to be shouldered and the minister should either resign or be dismissed by the Prime Minister because it was becoming more and more evident that he was totally incompetent.