Last weekend’s storm, which may be regarded as the worst storm to affect Malta since 1982, is the only one which did not happen in October, reports Eddie Attard.

Storms are created by a combination of low and high pressure that can create winds and result in the formation of rain clouds. When moist warm air rises rapidly, a thunderstorm can form, bringing heavy rain which can be devastating and deadly.

Weather-related deaths in Malta have mostly occurred in October rather than in the winter months. This is why our forefathers used to believe that the feast of St Therese of the Child Jesus, celebrated on October 1, was usually associated with the change of weather. 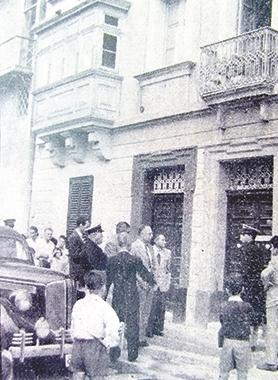 The building in St Sebastian Street, Valletta, where the October 13, 1957, tragedy occurred.

The first deadly storm of the past century began on October 16, 1913, when at about 12.30pm, big dark clouds brought darkness and a sudden downpour accompanied by thunder and lightning. It stopped raining for a while but continued pouring some time later.

In a matter of minutes, flooding affected many areas, and at about 5pm the Valletta police were in­formed that the residents of numbers 75, 80 and 81 in Strada Levante (East Street), Valletta, were in danger. When the police arrived on the scene they found the occupants in about one and a half metres of water and the roofs in a state of collapse. The worst-affected areas were the Manderaggio, Marsamxetto Bastion and near Fort St Elmo. It was re­ported that in Valletta about 290 millimetres of rain fell on that day.

At Cottonera, houses were flood­­ed and the deluge caused the death of two boys, Karmnu Baldacchino, 12, and Ġużeppi Bugeja, both from Żejtun. The boys were last seen collecting refuse near the Polverista Gate, Cospicua. Their bodies were later found in its whereabouts. Joseph Azzopardi, who was proceeding on foot from Luqa to Cospicua, was struck by lightning and rendered unconscious. Some workmen assisted him and took him home.

In Rabat, the rain started at about 3.30pm and lightning struck the parish church of St Paul, without causing serious damage.

In Sliema, lightning struck the United Service Bar at The Strand, smashing all the bottles and glasses on the shelves. Garden walls of some premises in this locality were demolished and the area of the Commanding Officers’ Quarters at Tigné was flooded. More damage was reported in St Julian’s, and in Tal-Mensija four bullocks were killed due to the flooding. 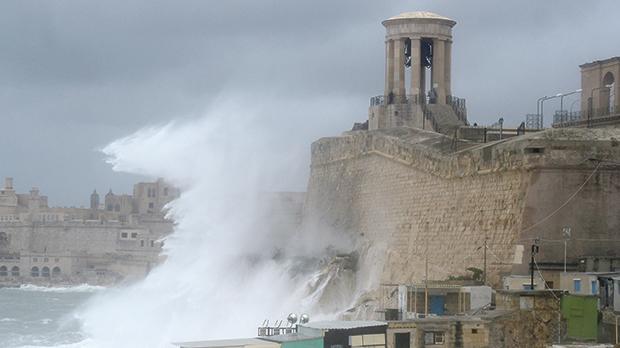 The inhabitants of Msida, Qormi and other low-lying localities suffered the most during this rainstorm. Some of the houses in Msida were flooded by 1.5 metres of water, and families were obliged to remain indoors. In one house the rush of the water caused such enormous damage that the roof collapsed, luckily without injury to the occupants. A man was struck by lightning which entered from his back garden, cracking several walls. Lightning also struck the police station and a mattress in one of the upper storeys was reduced to ashes.

At Kalkara, the rainwater on land and the level of the sea seemed to merge. Seve­ral houses were flooded and much damage was done to the items inside these houses.

In another October storm, Ugo Galea, 51, lost his life when he tried to get off a bus in Valley Road, Birkir­kara. Early in the afternoon of October 4, 1951, a sudden rainstorm caus­ed flooding and damage to houses, especially in the areas of Birkirkara and Msida. Galea was seen with two other passengers alighting the bus which could not continue the journey. After realising the danger they were in, the three passengers tried to get back on the bus, but only two managed to return safely. Galea did not make it and his lifeless body was later recovered at Msida.

Twelve days later, another rain and thunderstorm hit the island, and at about 1.30pm lightning struck a house in Sant’ Ubaldesca Street, Tarxien, where Toni and Maria Cini lived with their nine children. The roof collapsed and demolished the first floors of the house, killing the parents and Joseph, their eldest son.

The other eight children were pulled out alive from the rubble and taken to the Central Hospital in Floriana. The youngest was Jane, aged four. The rescue operation was conducted by the police assis­ted by some of the neighbours.

At Marsa, nine-year-old Spiridione Zahra lost his life when he was playing in the polo ground

Due to the thunderstorm, about 120 residences sustained damage and alternative accommodation had to be provided to those affected badly. Meanwhile, a fundraising com­mittee was set up to help the surviving members of the Cini family.

The October 18, 1954, rainstorm caused lots of damage in various localities. Among those damaged was a house in Old Theatre Street, Valletta, where the roof caved in under the weight of water. Luckily, no one was injured. Other residences in St Ursola Street were damaged and residents were told to leave their houses.

The old parish church of Kalkara was flooded for the fifth time, sustaining a lot of damage. Parishioners helped to clean the church and also contributed to fix the damage. 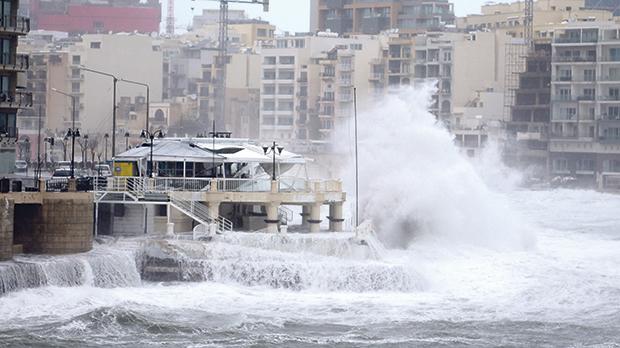 The Central and Valletta Telephone Exchange at Porte-des-Bombes were also flooded. At Mdina, part of the bastion collapsed, dama­ging two cars parked in the area.

Yet another October rainstorm caus­ed more flooding, damage to buildings and loss of lives. On October 13, 1957, at about 3.45am, two apartments in St Sebastian Street, Valletta, sustained major damage when the upper roof collapsed due to the heavy rainfall.

Alice Talkington, 53, lived in the upper floor of the building, and after a power outage, she tried to light a petroleum lamp as it was still dark. While doing so the roof trembled and Emanuele Tonna, who lived beneath Talkington’s apartment, tried to warn the woman that they were in great danger. After more trembling the roof collapsed on the bedroom where Mary Tonna was sleeping together with three of her children. 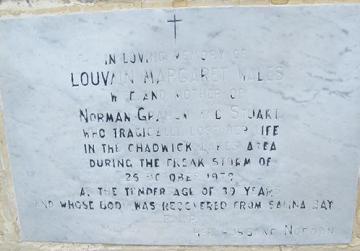 A plaque in Salina where the body of Louvain Margaret Wales was found on October 25, 1979.

The weight of the floor above caused the collapse of the bedroom floor, and Talkington and three members of the Tonna family – Mary, Rose and Twanny – lost their lives.

Luckily, Dorothy Tonna grabbed her baby brother, Martin, and ran into another room where more members of the Tonna family were sleeping.

Emanuel Tonna escaped unhurt as a few minutes before the roof collapsed he went into the kitchen to prepare the milk for the baby. Two members of the Talkington family also escaped unhurt.

Some neighbours, together with the police and members of the Royal Military Police, carried out the high-risk rescue operation. 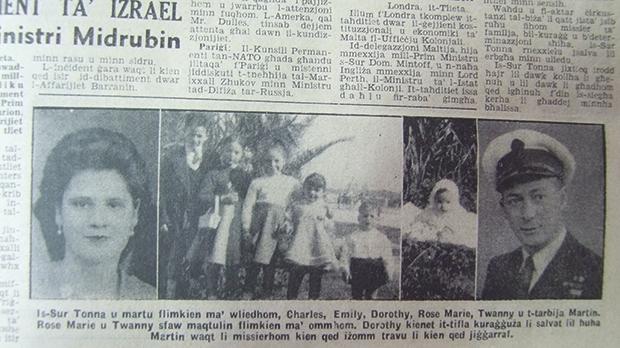 Three members of the Tonna family – Mary, Rose and Twanny – lost their lives on October 13, 1957.

Meanwhile, at Marsa, nine-year-old Spiridione Zahra lost his life when he was playing in the polo ground. The heavy rainfall caused a major flood in that area and the boy was carried away by the water.

Luckily, there were no fatalities when a whirlwind struck a huge transformer attached to a pole. The transformer fell on the roof of a house in Parish Street, Birkir­kara, destroying the building.

At about noon on October 15, 1960, the whirlwind swept through Qormi, Birkirkara, Msida and St Julian’s, causing damage and injuring 12 people. In Dun Mario Street, Qormi, part of a house collapsed.

On October 25, 1979, another storm also caused four deaths and damage to property. A heavy rain downpour started at about 4.45pm and, in a short span of time the rainstorm also caused huge floods at the Marsa Sports Ground. The police had to use life rafts to rescue 28 persons who were trapped in that area. Other rescue operations were carried out in Valley Road, Birkirkara, and Msida, where several cars were carried away by the rainwater.

Vivien Huntingford, 53, lost her life at Misraħ Kola, Attard, when the basement of her house flooded. Another victim was Louvain Margaret Wales, 39, an English tourist whose body was found at Salina.

Anthony Galea, 64, lost his life when the car he was driving was carried away by the flood water in Qormi. Luckily his wife and another member of the family escaped unhurt.

The other victim was John Herbert, 51, from Suffolk, UK, whose car was washed away from Ta’ Brija, limits of Siġġiewi to Marsa.

Meanwhile in Valley Road, Bir­kirkara, notorious for flooding, about 20 cars were trapped in the flooding. A mini-bus carrying school­children managed to stop in a safe place and they were not carried away. 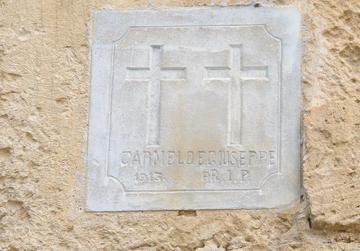 A plaque in Cospicua in memory of Karmnu and Ġużeppi Baldacchino who died on October 16, 1913.

A couple died when the roof of their house collapsed in Arcades Street, Paola. The woman died on the spot and her husband died at St Luke’s Hospital.

A 70-year-old woman from Żurrieq died in Sliema when part of the roof of a house she was working in collapsed. Another man met the same fate in Ħamrun when the roof of his residence collapsed.

On that day the high-speed winds reached 133km/h and damaged several cars when parapet walls and balusters on roofs collapsed.

Correction 5.51pm: A previous version mistakenly noted rainfall in the 1913 storm in millilitres, rather than millimetres.