Beautiful sunny Greece is mostly known for its picturesque islands and classical Hellene ruins. However, there is at least one other wonder which no traveller should miss - a group of six monasteries known as Meteora, says Melisande Aquilina. Literally meaning suspended in the air, the monasteries are situated at the edge of the plain of Thessaly in central Greece. 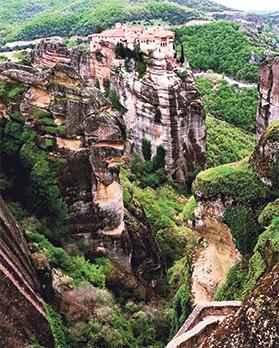 Defined by Unesco as a unique phenomenon of cultural heritage, these Eastern Orthodox havens of ancient cultural and religious artifacts and icons perch majestically on enormous columns of rock rising precipitously from the ground. This rare geological peculiarity is truly one of a kind.

As we navigated the winding roads in our rented car, I couldn’t help but wonder at the original monks who, fleeing from the encroaching Ottoman raiders at the end of the 14th century, found refuge in the isolated caves and then, later, further up the rocky slopes of Meteora.

Originally there were 24 monasteries atop these impossibly imposing natural formations, however, unfortunately, only six remain active today as the others all fell into ruin, most notably after the depredations of the Second World War, when many were bombed and their art treasures stolen.

The six remaining monasteries – testaments to the piety and art of the Orthodox culture – are situated near each other, so though I recommend renting a car or purchasing a coach ticket to arrive to Meteora itself, one can still continue walking on foot from one monastery to the other. Of course, if you plan on visiting, I would also suggest dedicating at least one full day to visit all six monasteries. There is so much to see. 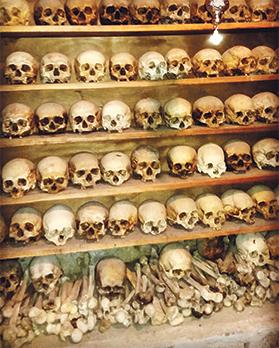 We rounded a corner and suddenly there it was – a sight I will never forget. I could hardly assimilate how far up we were, not to mention take in the amazing panorama of abrupt vertical rock pinnacles topped with exquisite red-roofed buildings, without wondering how on earth anyone could have built them up there.

Especially knowing that the oldest and largest monastery, that of Great Meteoron, had been erected in the 14th century, when construction materials and aides were very limited. We stopped the car to take some photos and realised that we were not the only ones there. Yes, Meteora is underrated, yet there are still many people visiting all year round – not just pilgrims and history buffs, but also rock climbers, trekkers, and simple tourists. Beware though, Meteora is not a site for those who don’t like walking. One must brave a myriad of stone steps cut in the rocks themselves, sheer bridges and wooden platforms to access the fairytale buildings. Definitely not for the faint hearted. 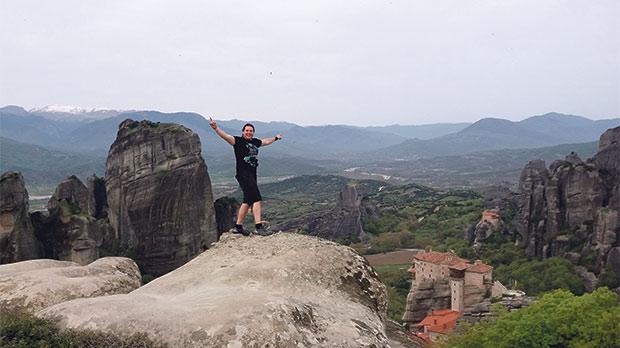 Unfortunately, we did not have time to visit all six monasteries, seeing only four of them. The first we went to, the Monastery of Great Meteoron, is surely my favourite one. It is situated on top of the highest of the inhabited rock pinnacles, reaching more than 613 metres above sea level, and was founded by a monk who later became a Saint of the Greek Orthodox Church.

Facing the rough vertiginous steps hewn into the rocks, which one must climb to reach the monastery, I admit, my fear of heights started to make itself known. Then, I was told that I was lucky to be using steps at all, since before the 1920s, the monks used to access the buildings using large baskets, pulleys and ropes. It must surely have taken years to carry construction material up the high rock formations using nothing but nets, cordage and folding ladders. Not to mention great fortitude and strength of will. 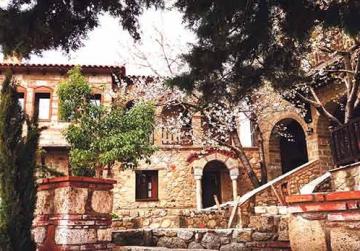 As I paid the meagre €3 entrance fee, I was given a long colourful skirt to wear over my shorts. Scanty attire is, in fact, not permitted in the monasteries. However, I soon forgot my momentary discomfort over the ugly garment as soon as I started exploring. The medieval kitchen, the gold Byzantine paintings in the main church, the frescoes in the smaller chapels and the ancient illuminated manuscripts in the museum, were wonders to behold. As is the ossuary in the sacristy – literally a room full of skulls belonging to the monks who had lived there.

After a delightful hour clambering throughout the building, we found ourselves in a large courtyard. The pink-leaved trees framed a really magnificent landscape, as not just the other monasteries on their pinnacles, but also the tiny-looking town of Kalampaka below, the Pindus Mountains and the Pineios River were spread before us. A litter of kittens frolicked amid the serene splendour striking a cute note in that grandiose spectacle.

A small suggestion. Don’t buy any souvenirs from the pricey vending stalls outside. Each monastery has its own small shop where one can purchase the monks’ own products. I bought a small hand-painted censer and some sweet incense from Great Meteoron, and I really prize it knowing the dedication and effort it took to make it, especially since each monastery contains not more than 15 monks at one time. Much more original than any mass marketed fridge magnet, keychain or snowglobe for sure.

Next was the Monastery of Varlaam. This is the second biggest monastery of the Meteora complex and is located directly opposite Great Meteoron. The most curious and interesting thing I saw here was in the old tower, where they still keep the original net and windlass used by the first monks for their ascent and descent from the rock pinnacle.

There are also a number of graceful and colourful ancient icons which one can admire in the museum, as well as over 300 religious manuscripts on display in the sacristy. 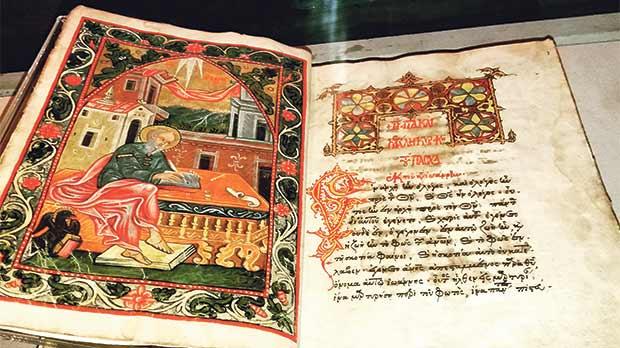 The third monastery I visited was the Holy Monastery of Roussanou, which it is rumoured, is built upon the foundations of a tiny chapel even older than itself. Roussanou monastery is inhabited by nuns and it was founded in the middle of the 16th century. Currently, only 13 nuns live there. It is more accessible than the other monasteries as the spire of rock it is built upon has a lower elevation. To reach this monastery one has to cross a small bridge from another peak. If one suffers from vertigo however, one should not down while on the bridge.

The last monastery I visited was Agia Triada, or the Monastery of the Holy Trinity, which is the hardest one to reach. One must, in fact, climb 140 uneven steps cut into the rock to reach it. Once you reach the top, the captivating view of the surroundings is totally worth it. Part of this monastery was also used as the setting for the final scenes of the James Bond movie For Your Eyes Only.

Visiting these monasteries was one of the most awe-inspiring places I’ve ever been to.