The Renaissance boasts many masterpieces that were left unfinished by their creators. Notable examples are Michelangelo’s Rondanini Pietà, Albrecht Dürer’s Salvator Mundi and quite a number in da Vinci’s oeuvre, a notable example being The Adoration of the Magi.

The term non-finito originally referred to sculpture, Donatello being generally considered to have pioneered the ‘technique’. Giorgio Vasari, in his seminal Lives of the Most Excellent Painters, Sculptors, and Architects, claims that Donatello, in his old age, was afflicted with disease and loneliness, hardly the ideal conditions conducive to finishing works of art.

However, the Florentine sculptor tried to defy the odds of his predicament and accepted the commissions for the construction of the Pulpit of the Passion and the Pulpit of the Resurrection for the church of San Lorenzo, in Florence. These two works are charged with heightened spiritual emotion, which was a characteristic of the sculptor’s last phase.

“The term non-finito originally referred to sculpture, Donatello being generally considered to have pioneered the ‘technique’”

Non-finito can be encountered in subsequent eras of art history – from Rembrandt to Manet to Matisse and even up to the present day. In the 20th century, the sculptural oeuvre of Josef Kalleya, one of the fathers of Maltese modernism, is replete with this thought process while creating, baring para­llels with that of Italian sculptor Medardo Rosso and, to a lesser extent, Auguste Rodin.

The Maltese artist left his sculptures outside, at the mercy of the elements, to provide the final burnish. He believed that he wouldn’t be able to beat nature to sign off his work. In this exhibition, Art Interrupted, currently hosted at Il-Kamra ta’ Fuq in Mqabba, curator Melanie Erixon explains that the artists, who were personally invited to participate, were immediately intrigued by this rather unorthodox theme.

She says: “In reality, this is nothing new  and some artists even leave their works incomplete as part of their style. However, in this case, the difference is that this incompleteness is the subject of this collective. This is unusual, as the invited artists, in their majority, generally present finished pieces to be exhibited.”

The exhibition explores the theme through different media. Erixon continues: “All artists were free to interpret the theme in their own way and some created new works, specifically leaving the work incomplete on purpose as a ‘finished’ work, while others opted for older works left unfinished for whatever reason.”

The viewer is invited to conceptually complete exhibits, which would act like a symbolic artist-viewer collaboration. In the piece presented by Aaron Bezzina, a higher level of involvement and a deeper collaboration is required as its prospective owner, besides its conceptual viewpoint, would be invited to complete the work in its physical form as well.

Antoine Farrugia, incidentally the only sculptor in this exhibition, presents one of his abstract creations in an uncharacteristic unfinished form, far removed from his polished finished work that the art-loving public is accustomed to. Reminiscent of Brancusi’s minimalist organic forms, the sculptor progressively releases the sinuous form from its parental block of limestone. The chiselling away has been suspended at a point in time. The pattern of grooves (and the accumulated limestone dust) antagonises the public’s general perception of his generally clean, typically burnished output.

Debbie Caruana Dingli’s signature cartoon-like style is the template for comments about Maltese society, its idiosyncrasies, its unhealthy relationships, its silly political affiliations, while exploring the other side of the coin through the endearing and the redeeming. In Blah Blah Blah, which was deliberately left unfinished, the direction of the narrative and the dynamics of the relationships within it can be altered by the viewers, through their act of selective and contradictory mental concealment and approval. 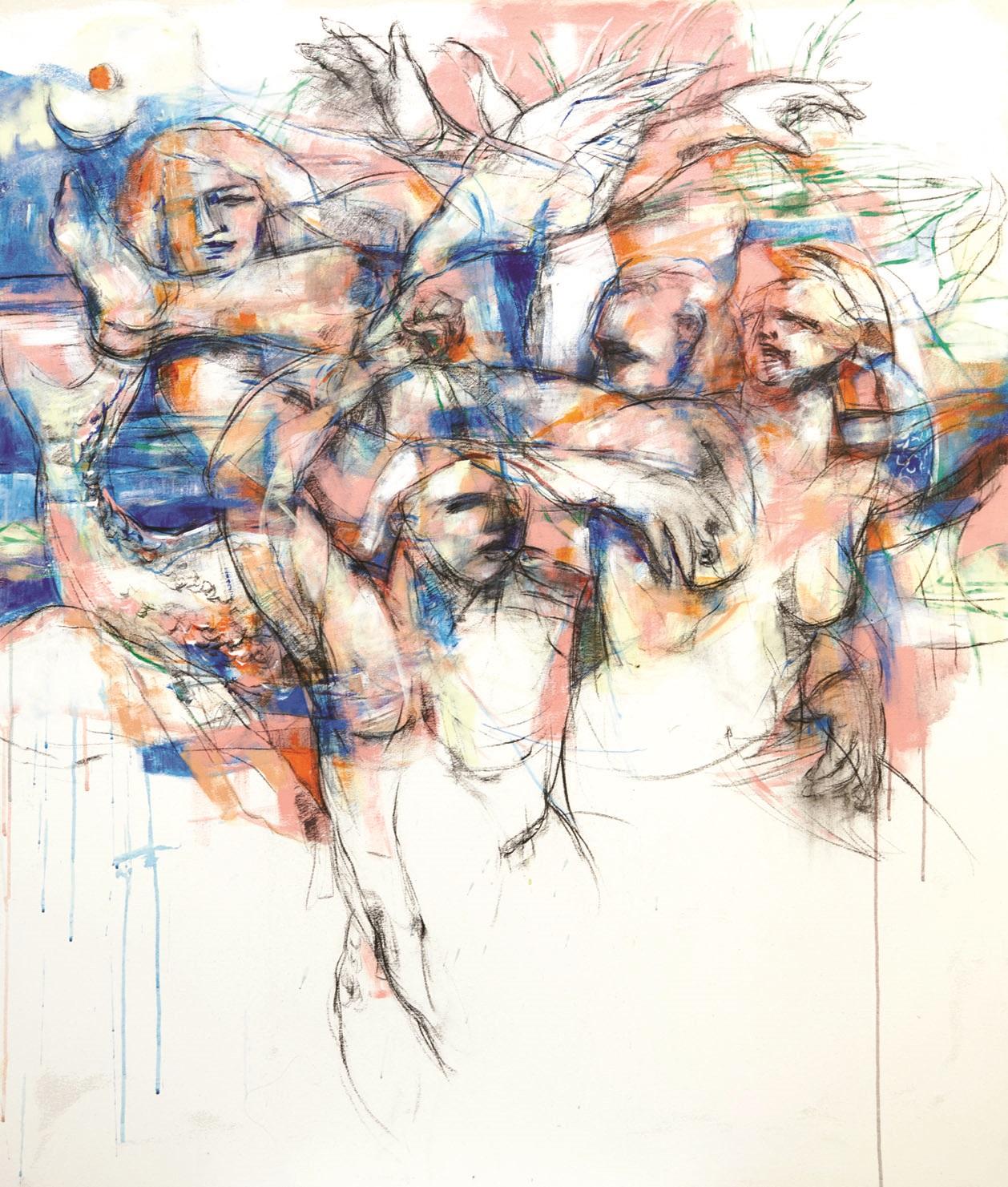 Lorelei (after Böcklin and Lagrenée) by Gabriel Buttigieg

Surveying Gabriel Buttigieg’s creative process in stages, especially through his social media posts, reveals the mechanics of how the artist builds his complex compositions of human and non-human bodies, essentially the defining fingerprint of his oeuvre. Lorelei (after Böcklin and Lagrenée) looks like one of those in-between works, as the upper part of the composition seems to be at an advanced stage of completion while the lower part is white and still largely bereft of compositional elements. There appears to be a centripetal vortex of limbs and one can mentally visualise the finished product through an act of simulation and repetition of motifs. 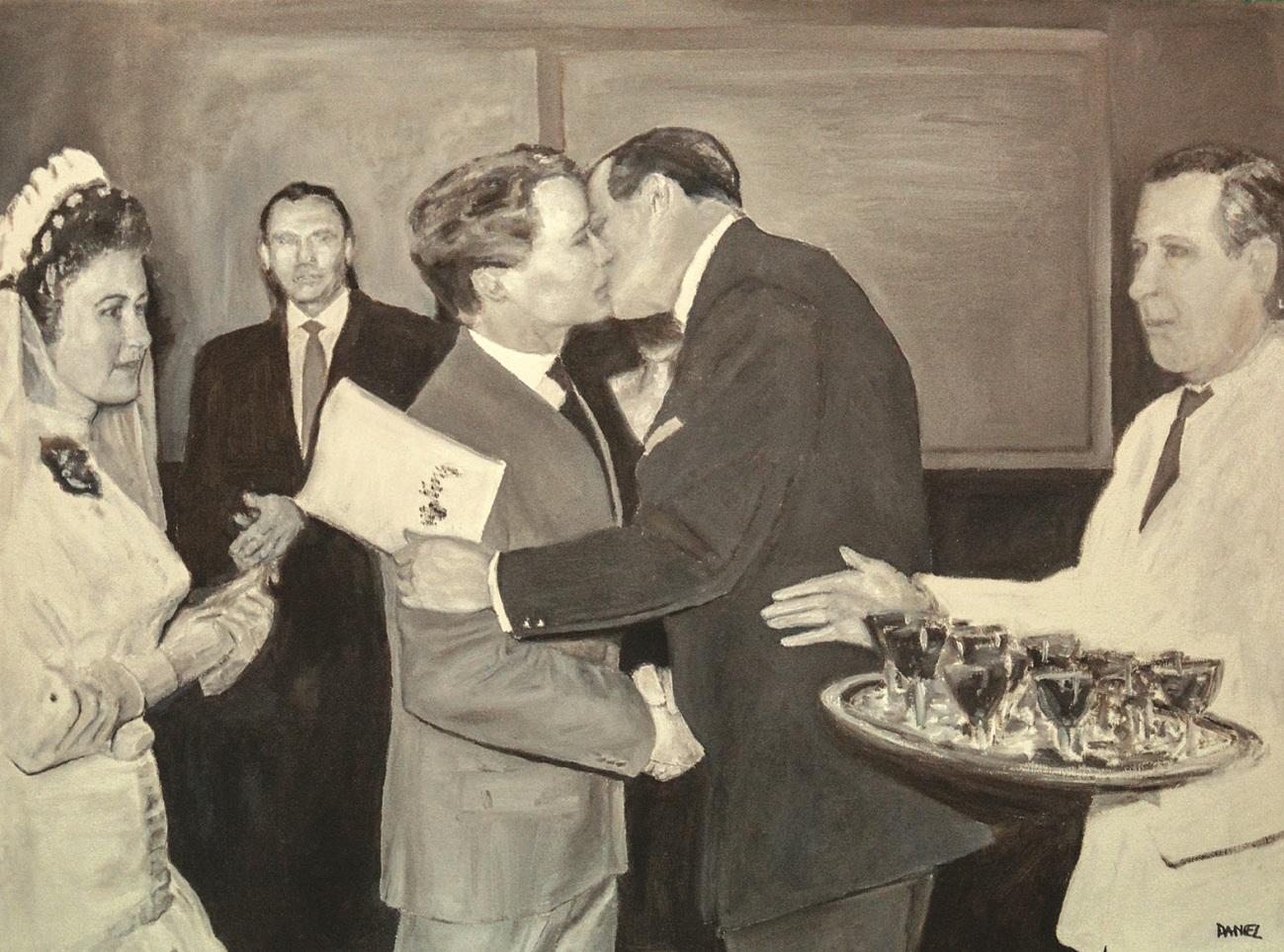 The Gathering by Daniel Borg

Tongue-in-cheek comments are the staples for Daniel Borg, the Berlin-based artist who refers to photography and cinematography as springboards for creation, evoking the worlds of Luc Tuymans, Wilhelm Sasnal and Alex Katz. In fact, The Gathering demonstrates a Tuyman milky white sheen, as if blitzed by a flashgun that captures a historical image. Like the Belgian artist, Borg reinterprets photographical snapshots of historical moments, leaving one perplexed about their narrative. The moment in time is suspended in a netherworld, utterly deprived of context and historical relevance. Queen Elizabeth (perhaps) and a waiter carrying a tray loaded with glasses look on as two men kiss intimately on the lips while shaking hands.

The unreality is augmented in the frozen image, evoking Tuyman’s words that “an artwork should point in more than one direction, not be this sort of placating, self-demonstrating, witnessing element”. The witnessing element, us viewers and two of the protagonists, is there. However, we viewers are utterly at a loss in identifying and orientating this ‘historical’ split-second moment to a context, captured in one-sixtieth of a second of unit time, one of the billions preceding and following it. The non-finito could be encountered in the open-endedness of the event portrayed, rather than in the actual painterly work itself. 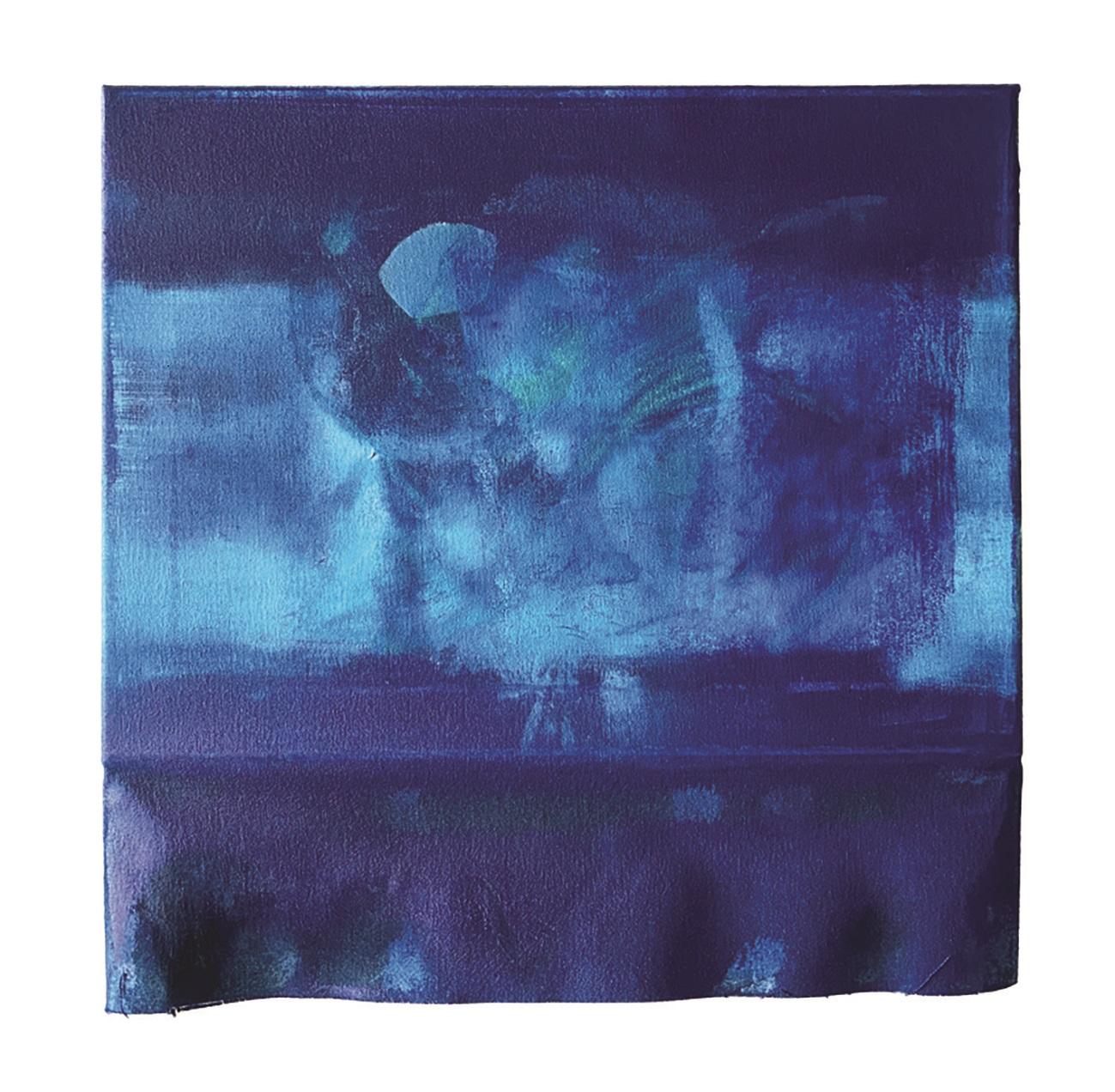 Mario Abela’s series of paintings, titled Notes from the Anthropocene, have occupied his creative process for the past few years. These sprawling canvases draw on the artist’s interest in a purported geological age coinciding with the devastating anthropogenic impact on the environment. Unbridled human activity has resulted in the catastrophe that we are facing today. Nobel-prize winning atmospheric chemist Paul Crutzen had coined the term ‘Anthropocene’ (the epoch of man). For the first time in documented history, geologists are dating an epoch in the present tense.

Abela is presenting a non-finito as an artefact in its early ‘geological’ stage of its crea­tion. Undefined semi-abstract forms are suggested in tones of blue, while the canvas is left unstretched and rather roughly cut with a frayed perimeter, rather simulating the fossil-extraction process. It is like del­ving into the nascent stages of an artwork, removing the uppermost layers and leaving the exercise of completing of the ensuing ‘stratigraphy’ to the minds of the viewers. 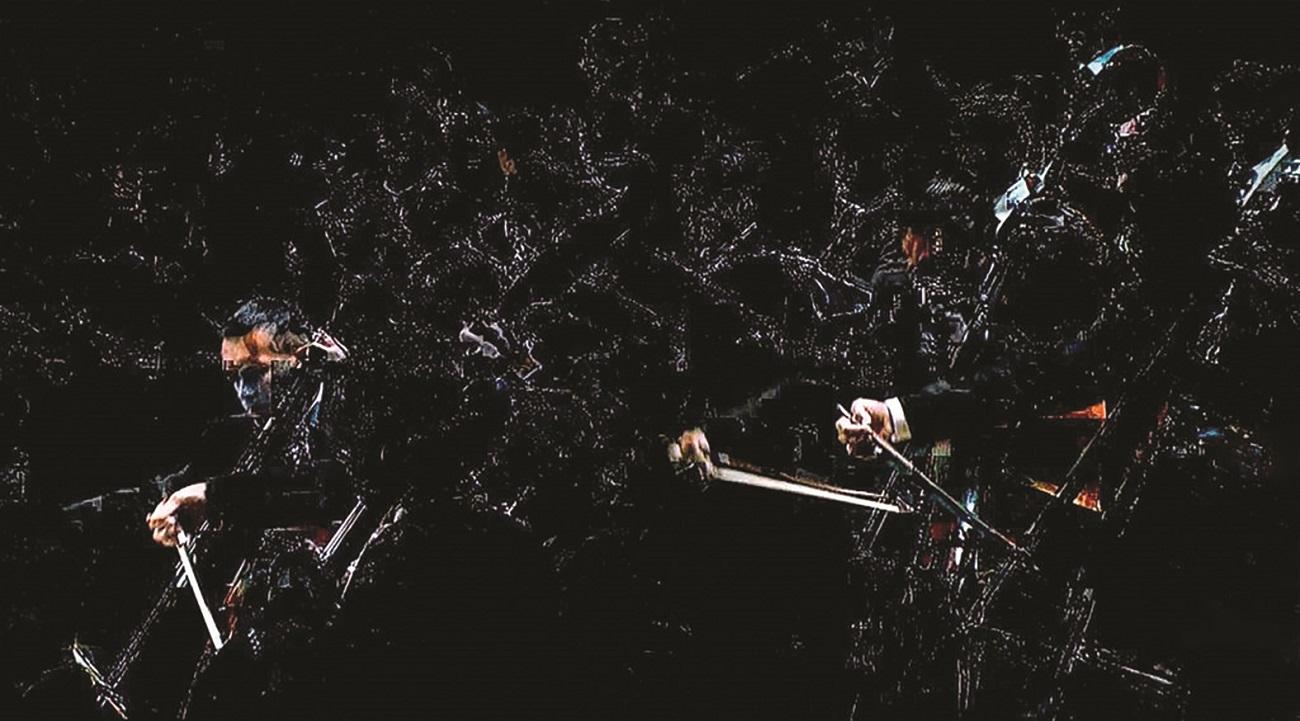 Alex Attard’s two works, thematically linked to an orchestral concert, defy the basic concept of photography itself – that it provides a clear and honest image of reality. Permanence and transience, concepts that he explored in his October 2021 exhibition at the same venue, can be encountered in his two non-finito works, photographs that decay into a memory of a musical performance, one that seemingly lacks the constraints of identity of the orchestra and the musical piece that is being performed.

However, these are photographic documentations, references to a televised concert that honoured the memory of Claudio Abbado, the celebrated orchestra musical director who had passed away in January 2014, just a few days prior to this TV transmission. The images seem to be in an in-between stage of resolution and dissolution, effectively resulting in a non-finito that will forever remain as such, as an unresolved flicker, an incomplete concert stuck as stutters of the airwaves.

The title of Darren Tanti’s Judith and Weinstein is rather ambiguous, contributing to the non-finito concept of the exhibition through its open-endedness. Weinstein most probably refers to Harvey Weinstein, who used his authority as a powerful film producer to sexually harass and rape a plethora of women, mostly associated with the film industry. Alternatively, the reference could be to the Old Testament Judith, a woman who erotically tantalised a powerful man to his downfall. The portrayed woman is a hero in both these narratives. The head on the plate in her outstretched hand could either be Holofernes’s butchered head or, alternatively, Weinstein’s metaphorical head being delivered on a plate through the initiatives of his victims, who spoke out about his advances through the Me Too movement. There is a fluid, non-finito dimension in the theme of the work itself and its merging of narratives. The painting’s powerful and rather anonymous menace is startling. 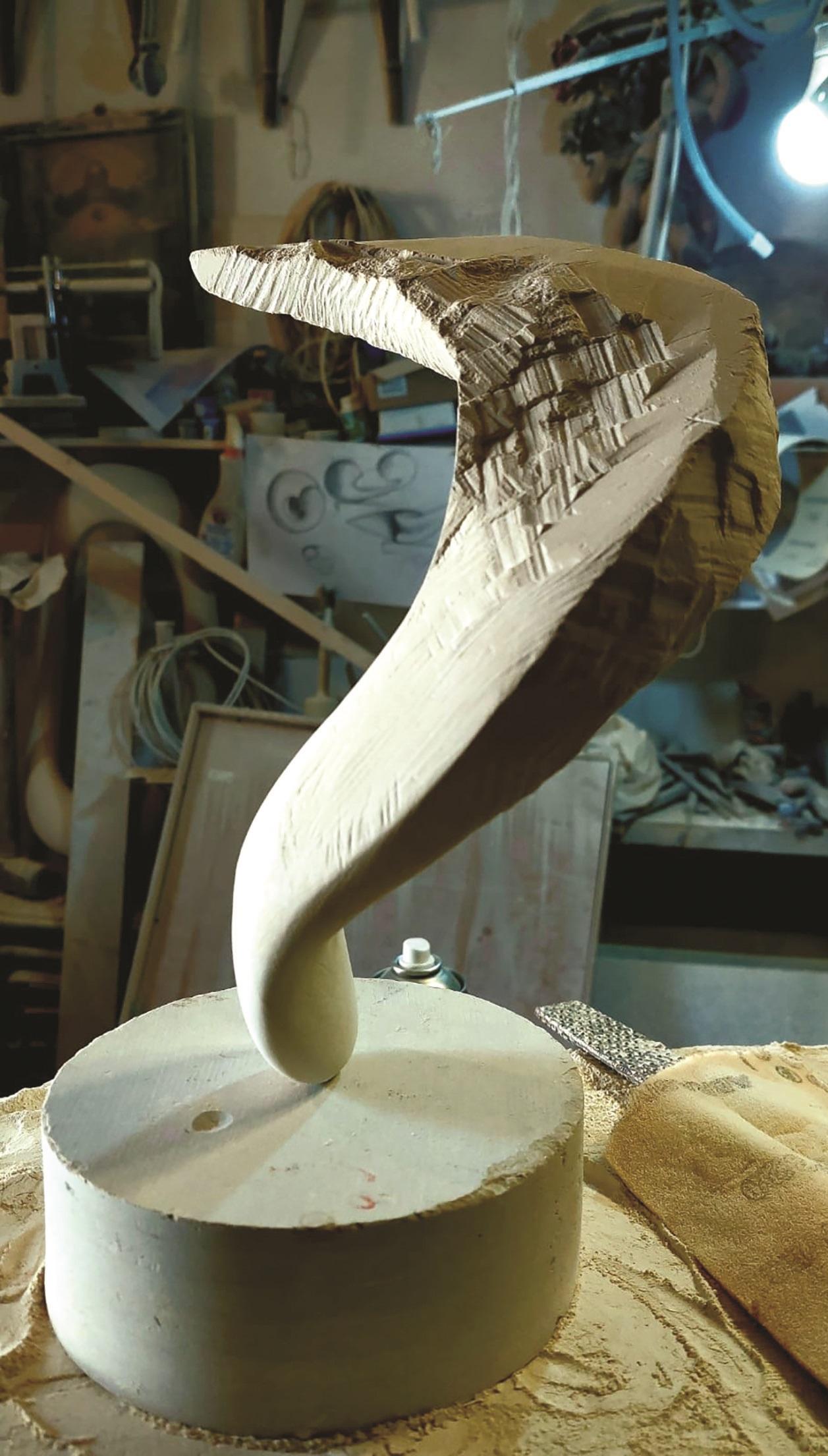 Non-finito merges the figurative with the abstract. It reconfigures narratives into possible alternatives whose parameters are particular to each individual viewer. The unfinished quality imbues the pieces with a sense of non-belonging, of being about to be born yet not delivered, of eternal youth and timelessness as the artist has not yet given a date to the piece by terminally signing off the work.

Art Interrupted, curated by Melanie Erixon for Art Sweven and hosted by Mqabba’s Kamra ta’ Fuq, runs until April 17. Log on to the event’s Facebook page for opening times.