Pietro Gagliardi (1809-1890) was one of the most skilled Italian artists to have executed work commissioned for Maltese patrons in the late 19th century.

Two of his finest paintings, The Assumption of Our Lady and Our Lady of Mount Carmel are found in Gudja parish church. The former, as the titular painting, hangs above the main altar, with the latter being one of the altar paintings embellishing the right-hand side of the aisle.

In his seminal work The Iconography of the Maltese Islands, 1400-1900, Mario Buhagiar praises Gagliardi’s compositions and their chromatic beauty while at the same time questioning an excess of sweet piety. The recent conservation of the artist’s Our Lady of Mount Carmel allows an excellent opportunity to reassess Gagliardi’s skill.

Gagliardi was born in Rome in 1809 and received his artistic training at the Academy of St Luke in Rome under the instruction of Tommaso Minardi, Vincenzo Camuccini and Gaspare Landi. His artistic debut is thought to have occurred in 1833 when he completed three canvases for various palazzi in the vicinity of Piazza del Popolo, one of the most prestigious areas of Rome. Soon after, he was commissioned to paint works for the chapel of Villa Borghese in Frascati and in 1840 he undertook work for Marino Torlonia in the town of Castel Gandolfo.

Gagliardi’s career took off following his work for Prince Alessandro Torlonia in 1842 at the Palazzo Bolognetti-Torlonia on Piazza Venezia. The establishment of the short-lived Roman Republic in 1849, which supported freedom of religion, drew a severe reaction from Pope Pius IX who reversed his earlier liberalism and embarked on a programme of reaffirmation of the Catholic faith as the state religion. To do this, the pope called on a number of artists, Gagliardi among them, to restore the artistic patrimony of the churches and basilicas of Rome.

Gagliardi worked in many of Rome’s finest churches, including San Rocco, San Vito and St Ignatius. His most prestigious commission is thought to be the series of 12 frescoes in the Basilica of St Augustine in Campo Marzio depicting the life of Our Lady together with the prophets of the Old Testament. In subsequent years, he developed a reputation for compositions suitable for Marian devotion.

By the 1870s, Gagliardi’s fame had spread to Malta where an increasing number of Italian artists were receiving commissions for newly created parishes. Gagliardi was soon to execute many paintings in Maltese churches as well as devotional paintings for the cathedral at Mdina. Of relevance to this article are his 1877 painting of The Assumption of Our Lady for St Mary’s parish church in Gudja and his Our Lady of Mount Carmel for the same church in 1879. 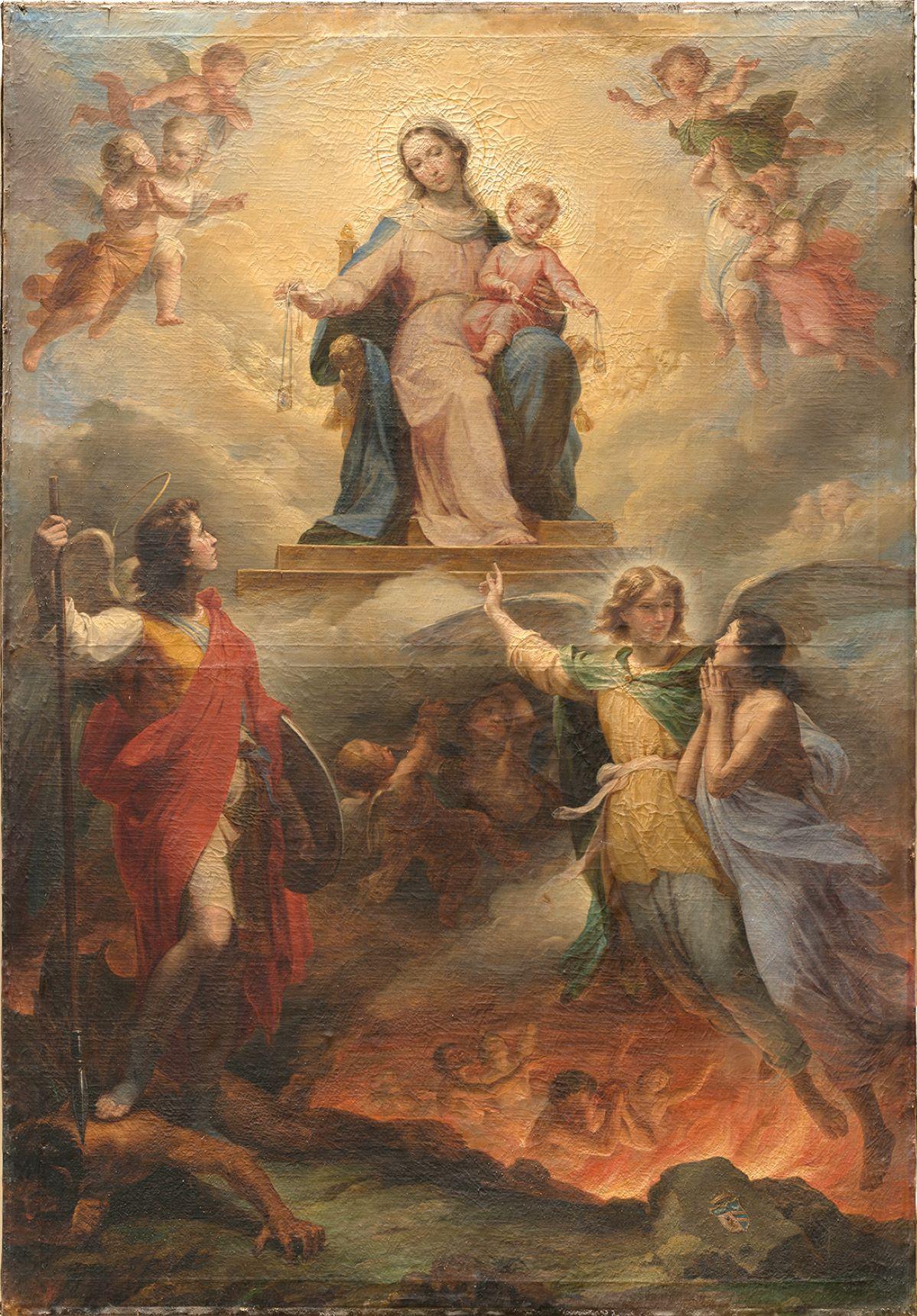 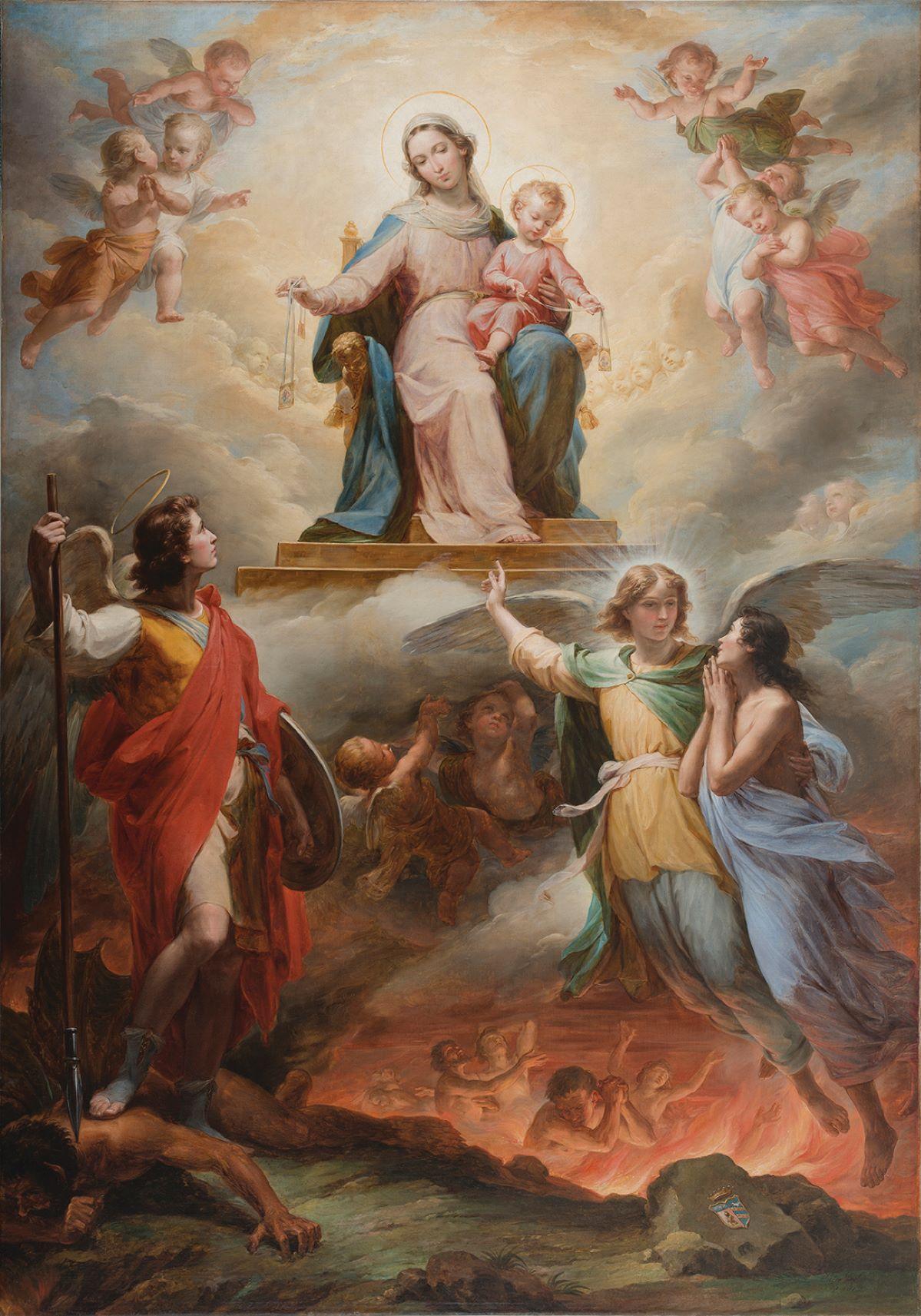 The Gudja Our Lady of Mount Carmel shows Our Lady seated on a throne with the infant Jesus on her lap. Both Virgin and child each hold a scapular, which by tradition was believed to have been given to the early Carmelite saint Simon Stock. The throne floats in the heavens supported by putti; additional putti, placed either side of the Madonna, frame the picture. Below the Virgin the artist depicted a maelstrom of souls in purgatory whose infernal anguish is palpable.

In the foreground are the archangels Michael (left) and Gabriel (right). Michael, who stands with his right foot placed on the prostrate Satan turns towards Our Lady; the archangel’s spear, held in his right hand, is poised to slay the devil. Archangel Gabriel, whose name translates as “strength of God”, appears to be guiding the faithful from a fiery purgatory up to the peaceful heavens. Gabriel’s right hand, pointing towards Our Lady, implies the intercession of the Virgin. 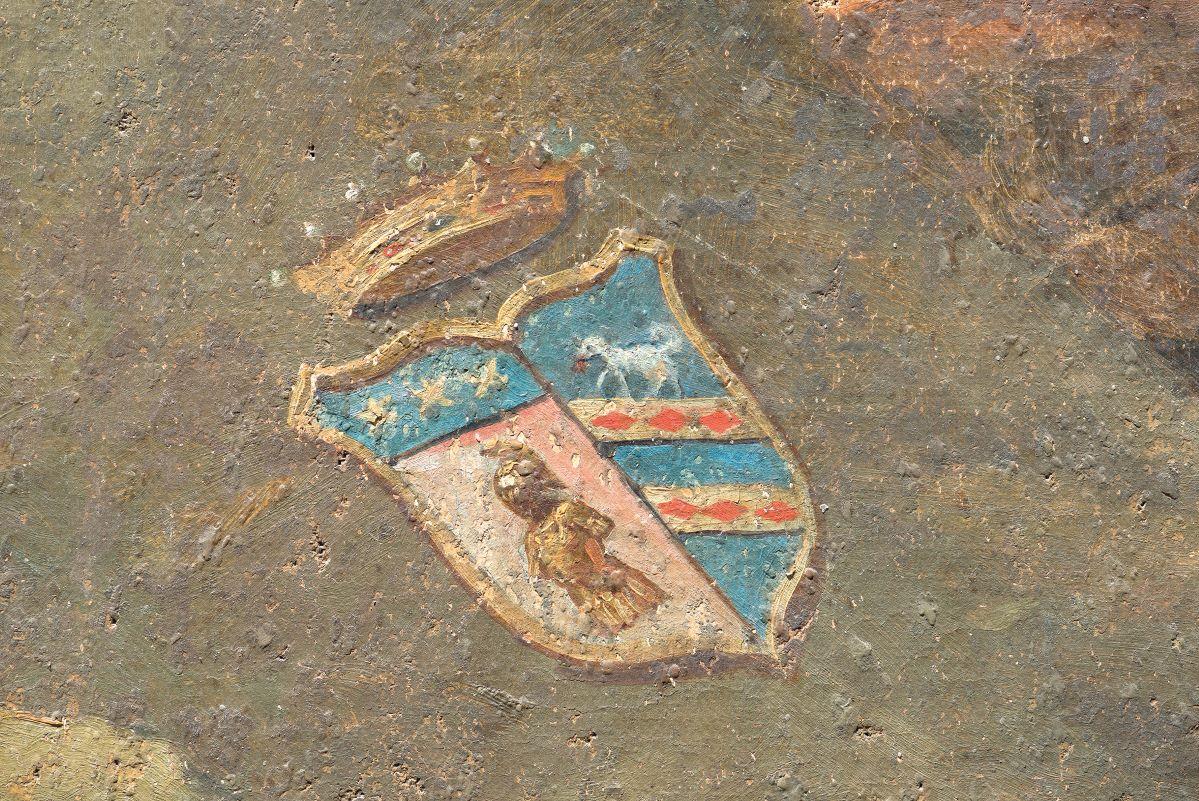 The coat of arms depicted on a rock in the bottom right-hand corner as studied and documented prior to treatments under diffuse light and (right) under ultraviolet light. Darker areas/spots seen under ultraviolet light corresponded to past retouching interventions. Photo: Manuel Ciantar/Suzanne Ciantar Ferrito 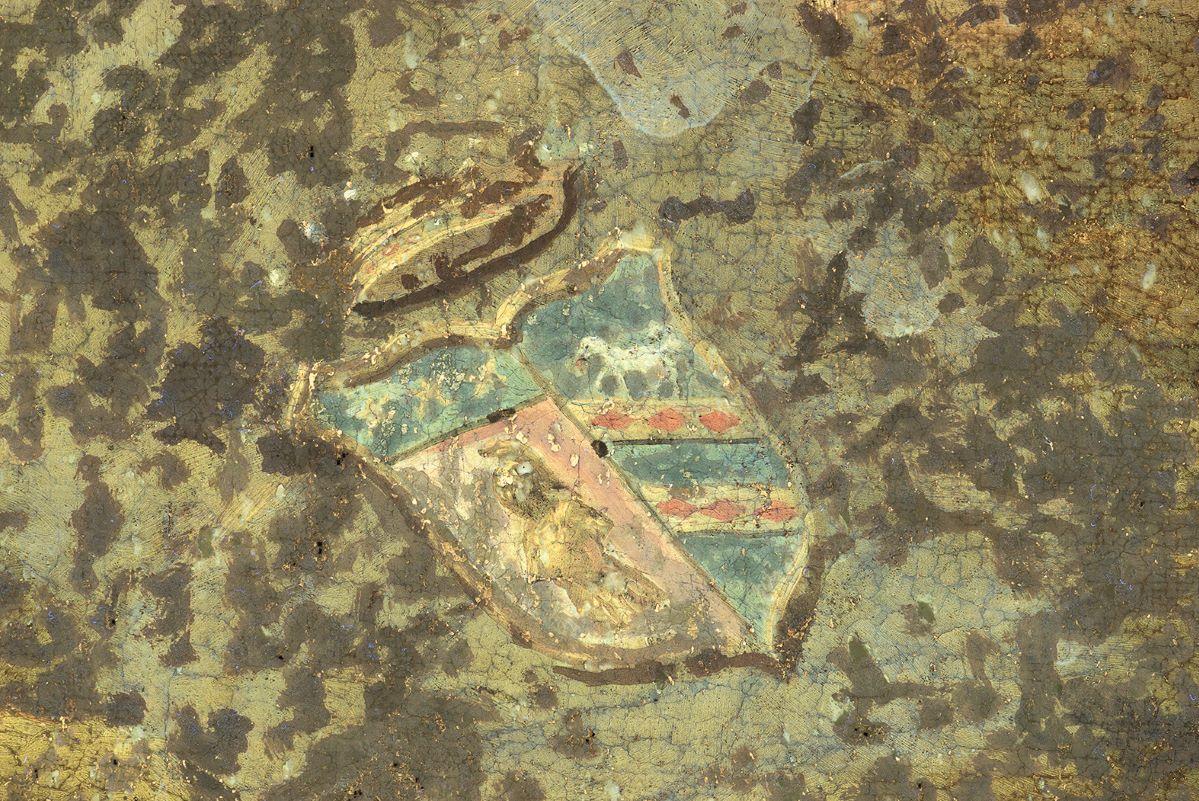 The coat of arms painted on a rock in the bottom right-hand corner of the canvas appears to be of the Testaferrata family. However, to date, no archival information has been found related to the commissioning of this painting. 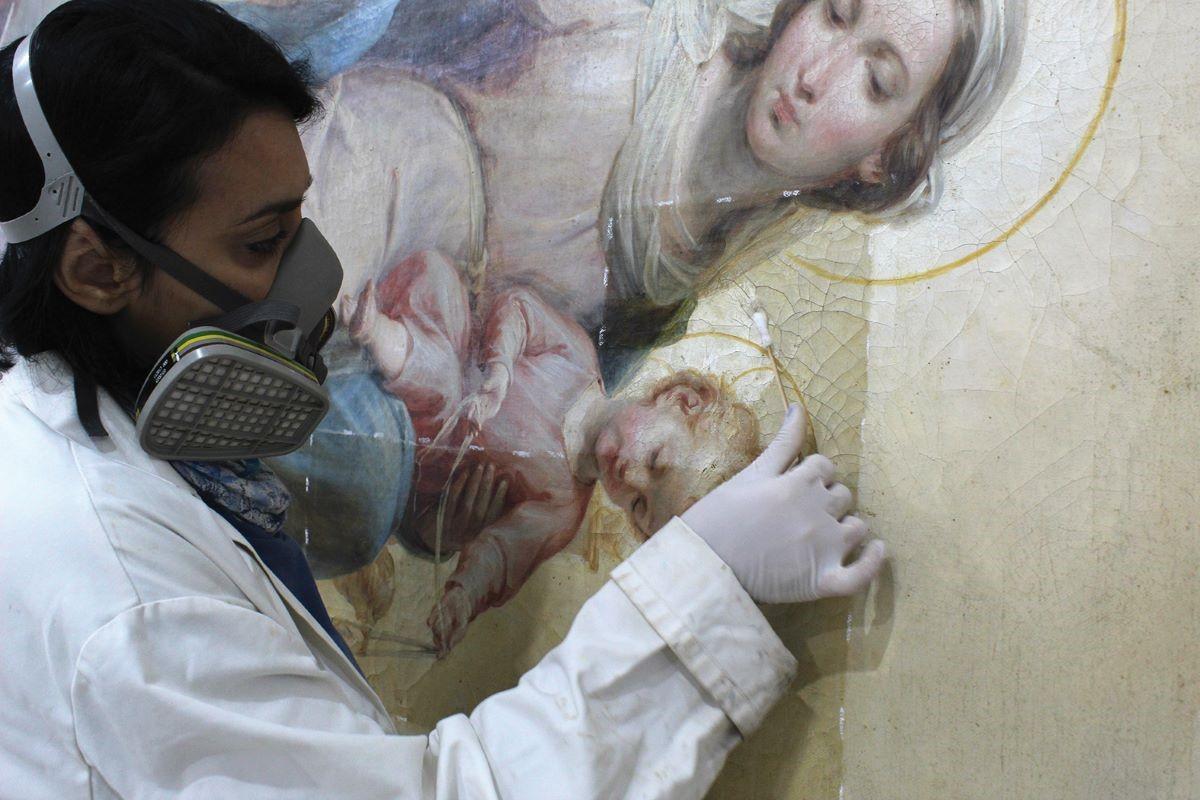 Gagliardi’s Our Lady of Mount Carmel was translocated to the conservation laboratory of Amy Sciberras Conservators – Fine Arts Restoration for conservation treatment in September 2021. The first steps were to carry out non-invasive scientific investigations in the form of multispectral imaging and professional art photography by Manuel Ciantar and Suzanne Ciantar Ferrito. These enabled the team of conservators, under the direction of author and conservation director Amy Sciberras, to understand the methods used by Gagliardi to create this masterpiece.

Gagliardi used an open weave canvas onto which a white ground preparation was applied, thus providing a suitable surface for the paint layer. The canvas had been stretched onto an expandable wooden auxiliary support (stretcher frame) using copper nails. The nails were, unusually, hammered through copper coins which, acting as washers, helped to spread the point loads of the nail heads onto the stretcher frame, without tearing the light canvas. 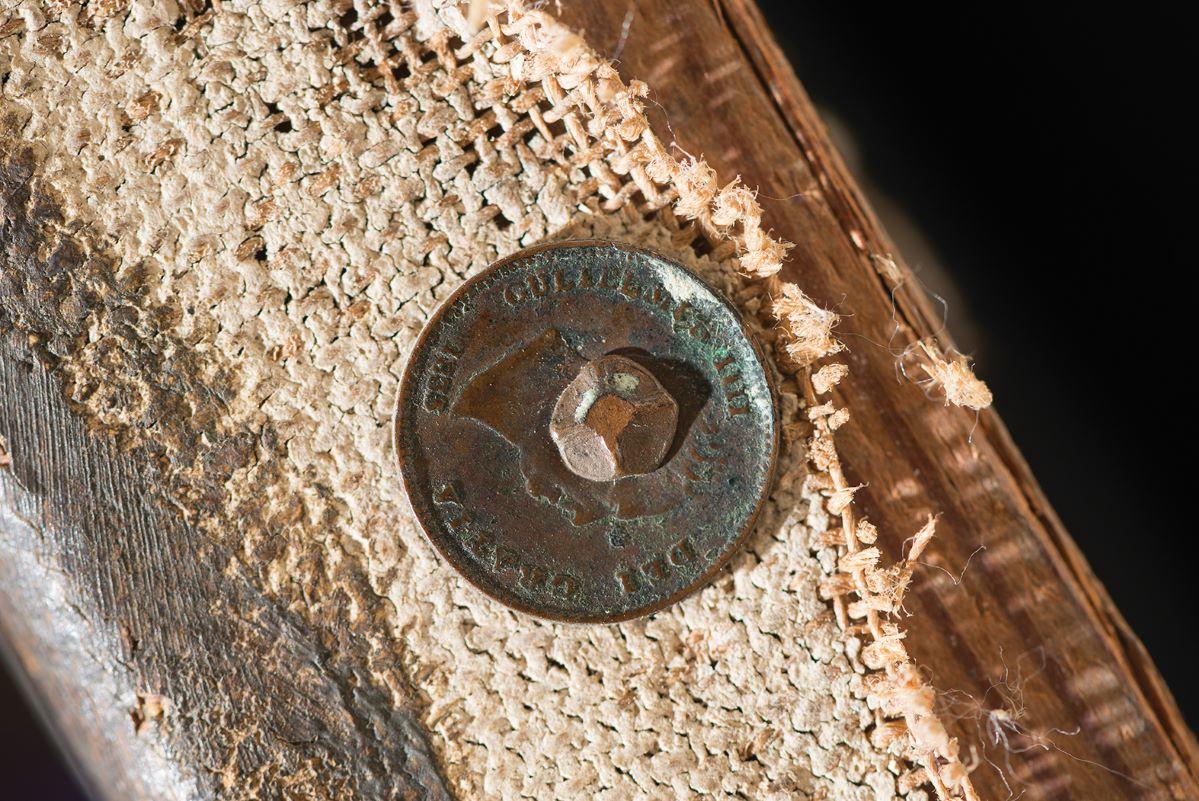 Detail of the coins used to help spread the point loads of the nail heads onto the stretcher frame, as documented prior to treatments. Photo: Manuel Ciantar/Suzanne Ciantar Ferrito

It is interesting to note that these coins are of a rare Maltese colonial mint. The 19th-century British copper coins in question were worth a one-third farthing. The helmeted figure of Britannia holding a trident is depicted on one side on the coins, while King William IV, in profile, is shown on the reverse. The inscription on each side runs: “Gulielmus IIII Dei Gratia, 1835, BRITANNIA: REX FID: DEF” which translates as “William IV, by the grace of God, King of the Britons, Defender of the Faith” – wording which is still used today on British coins.

Unfortunately, the signed and dated oil-on-canvas painting was in an unstable condition; the extensive network of cracks (craquelure) was immediately obvious; in addition, the paint layer had lifted in numerous areas. Previous restorations had addressed this deterioration by retouching the craquelure gaps that had been created over the years – a solution that was not satisfactory. Modern conservation techniques necessitate that the lifted and cupped paint layer be lowered and fully stabilised.

Additionally, the canvas had slackened over the years and minor lacunae and tears were also identified.

The legibility of this fine painting was also hindered by stretcher marks caused by the sharp edges of the wooden members comprising the auxiliary support, as well as by layers of grime and oxidised varnish. Wax spattered onto the canvas over the years from nearby candles also obscured precious detail. 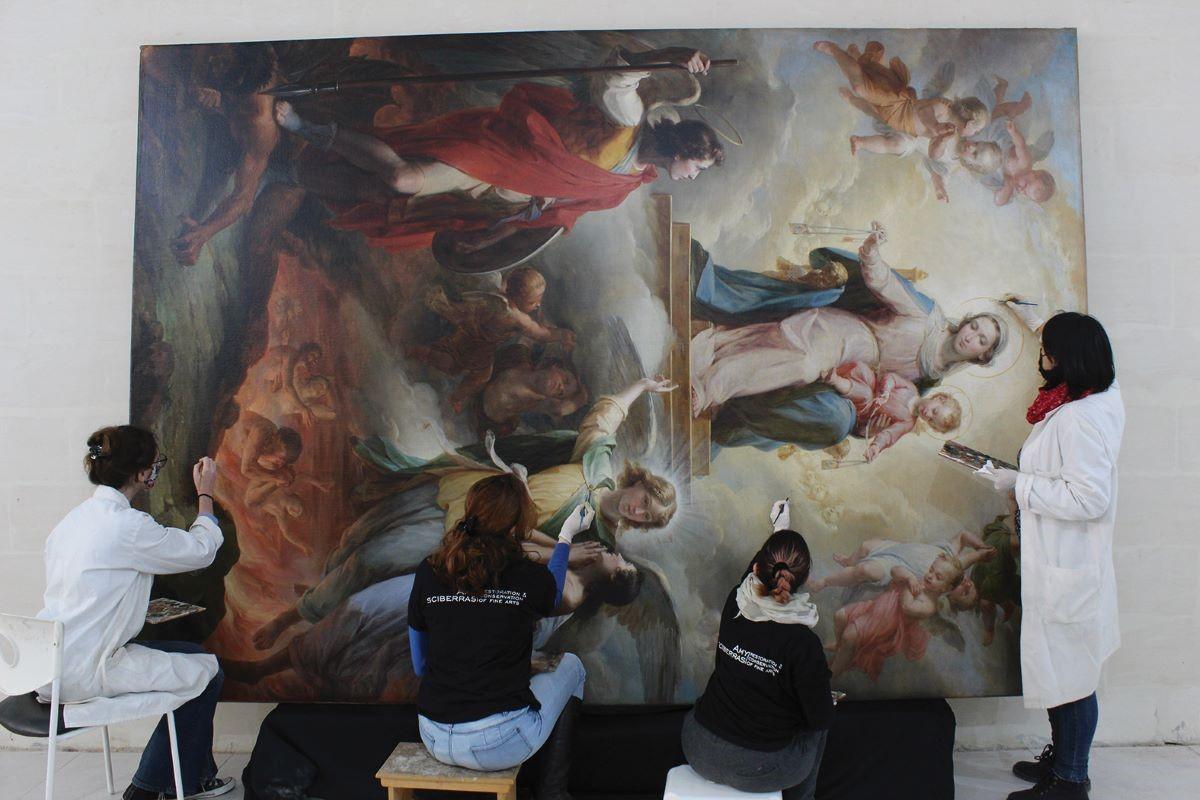 During the final stages of chromatic integration of infilled losses and abrasions that were present in the paint layer. Photo: Amy Sciberras Conservators

The local application of a consolidant within the cracks and behind the lifted paint allowed such areas to be temporarily stabilised so the conservators could carry out cleaning treatments. The aged and oxidised varnish layer was thinned down using organic solvents. Past retouchings were also addressed during this first phase of the cleaning procedure. The removal of the yellowed varnish revealed a layer of grime that further concealed the original bright hues. This grime was removed using an aqueous cleaning agent.

The final phase of the cleaning process involved the removal of the numerous wax drippings and fly specks. Mechanical means, together with solvents and a heating spatula, were used to remove the wax, whereas fly specks were removed using scalpel blades.

The canvas was subsequently removed from its stretcher frame to facilitate treatment of the verso by the author and her team. Grime and dirt pockets were cleaned from the fibres of the original canvas. The copper nails and coins were also treated during this phase of the conservation project.

Deformations in the canvas support and the stretcher marks on the paint layer were also addressed. Minor tears were repaired according to current conservation standards and methods. A consolidant was then applied to the entire surface of the canvas, ensuring re-adhesion between the various strata of the painting.

Since the original canvas was found to be generally in good condition, the decision was made to apply only a strip of lining to the edges of the canvas, thus strengthening them and enabling the painting to be re-stretched. The edges of the new strips of canvas in contact with the old were feathered (i.e. thinned down) to avoid hard edges and the bulging of the paint layer over time. The sharp edges of the wooden frame, which had previously distorted the canvas, were bevelled so as not to cause any deformations in the plane of the canvas and consequently to eliminate the possibility of damage to the paint layer.

The stabilised and strip-lined painting was then re-stretched onto the treated auxiliary support and the cleaned copper nails and coins were once again inserted in their previous locations. Ultimately, lacunae in the paint layer were infilled and chromatically integrated.

Finally, a protective coating was applied to the paint layer, thus restoring the full legibility of Gagliardi’s masterpiece.

The recently completed conservation of this canvas allows us to appreciate Gagliardi’s skilful handling of both colour and light.

Our Lady and the infant Jesus are bathed in a heavenly luminescence, which attracts the eye upwards towards the Virgin and Child. Their downwards gaze towards the two archangels completes the triangular composition and reinforces the concept of a trinity comprising of Our Lady, the archangels and mortals.

The impact of the painting is further enhanced by a variety of colours: the delicate pink with the contrasting blue of Our Lady’s garments, the vibrant scarlet of Michael’s mantle and Gabriel’s yellow and green garments. The glowing embers of purgatory are especially effective.

Amy Sciberras, MSc, B.Cons. (Hons), directs a team of conservators and has been entrusted with restoration projects of national and international importance. She may be contacted via www.amysciberras.com or e-mail info@amysciberras.com.

Christopher Grech is a UK registered architect who has practised in the UK and taught architectural technology in both the UK and the US, where he was a tenured associate professor at The Catholic University of America in Washington, DC.

This conservation-restoration project was entrusted to Amy Sciberras Conservators – Fine Arts Restoration, by Gudja parish church and was made possible with the support of APS Bank plc and local benefactors.

Special thanks to parish archpriest Can Fr Norman Zammit and art committee member Martin Gravina; professional photographers Manuel Ciantar and Suzanne Ciantar Ferrito, and all those who kindly offered help and assistance.