A bold new solo exhibition at the Ta’ Mena Experience in Xewkija presents local landscapes as they’ve never been painted before. Artist Christopher Saliba talks about the works hanging in this intimate space and explains how the energy of the colour red reflects the passion with which he paints

Red is a colour full of vitality, warmth and passion, either rarely used or relatively unexpected in landscape paintings. It is therefore a daring, challenging and surprising choice for the dominant colour in a series of Gozitan panoramas. The impact of red however is illustrated in a legendary story of two famous 19th century painters and rivals, Turner and Constable, whose paintings were hung alongside one another for the high profile Summer Exhibition 1832 in London. Turner realised that his cool-toned seascape Helvoetsluys was overshadowed by the neighbouring Thames scene The Opening of Waterloo Bridge which Constable had flecked with scarlet. The night before the exhibition opened, he took his brush and added an extra daub of red on to his seascape as a buoy bobbing in the choppy seas. This single accent of red, so the story goes, transformed Turner’s fortune: it was Helvoetsluys which stole the show.

Saliba understands the ways colours interact with one another and boost each other’s brightness and impact when placed adjacent: this is what most captivates and inspires him in his art. Influenced by Gauguin, Cézanne and the impressionist movement, and describing himself as a ‘colourist’, he begins each painting with only essential lines to show the form of the land. To this he adds sweeping layers of colour intuitively to build atmosphere and capture the emotions he feels as he paints. The apparent spontaneity belies a careful composition that draws on Saliba’s years of art training in Italy. The result is expressive, evocative, and defies expectations. Colours blend like the flavours of life and each painting is a feast of colour with the zest and tang of a fruit salad.

The unexpected nature of the background red challenges expectations and suggests, perhaps, deep secrets of the landscape

Saliba’s work is always strong and striking, squares and terraces of bold hues that have an innate joy: his colours might have been inspired by the bright illustrations in a child’s storybook or the rainbow jewels of a pirate’s treasure chest – emeralds nestled alongside sapphire and amethyst seas. 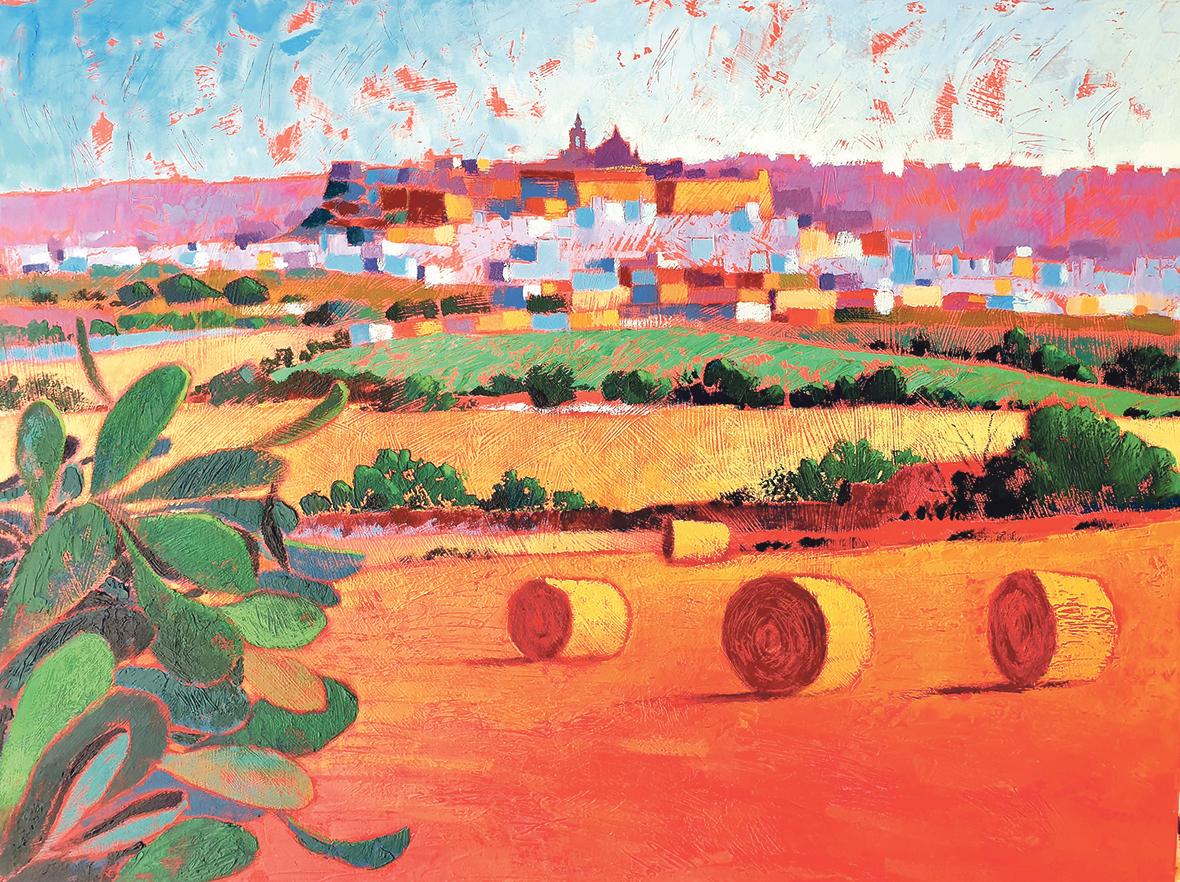 The colour of love and fire, the ruby is perhaps the most prized of all gemstones. Perfect for the festive season, Saliba has singled it out for special attention in this exhibition. Using a soft warm red as a primer for each canvas like the life-force of the earth beneath our feet, over the top of which he layers other colours harmoniously. The warm under-layer adds a depth to the paintings: the contrast adds radiance, throwing the greens forward and making the yellows sing out.

The unexpected nature of the background red challenges expectations and suggests, perhaps, deep secrets of the landscape. The panoramas themselves are timeless, a tribute to the glory of nature, and the beauty of the island. Although the paintings have a flow that suggests movement, the lack of people and development gives a sense of the age-old nature of the landscape and invites contemplation. The scenes could be a place from the past – some are reminiscent of the Holy Land –  and hold in them a prayer of appreciation and respect. The church appears frequently adding a focal point to the skyline in Saliba’s pictures, as in View from Għarb, the crimson church roof is the only red accent on the canvas yet with an impact comparable to Turner’s buoy.

With burnt orange hay bales and fields in rich sienna as if the sunset was resting on the ground, to the warm pinks and purples of cliffs and terraces, the collection focuses mainly on country views of Gozo’s villages and the fertile valleys between. A dramatic depiction of Tas-Salvatur hill hangs as if awash in wine. The Redeemer stands tall against plum skies, rich red-brown zigzags at his feet, the field edged with dark fir green. Mġarr Harbour also makes an appearance alongside an unusual interpretation with reds and golds of the view over the salt pans to Xwejni’s striking rock formation.

The richness of the colours are a celebration of life and its wonders, the golds celebratory, the reds warming as the winter chill sets in ahead of Christmas. Saliba is like a composer, bringing elements together harmoniously, each painting a heart-warming Christmas carol!

“Christmas is a happy time that brings people together whoever you are, whatever your background and wherever you’re from,” says Saliba. “And that’s the beauty of life. It’s a time of generosity, goodwill and warmth to all men and it’s that feeling, and of sitting with family and friends holding a glass of Shiraz, that I have tried to capture in this exhibition!”

Red is The Colour by Christopher Saliba is open at the Ta’Mena Experience, in Xewkija until December 31, 10-8pm. 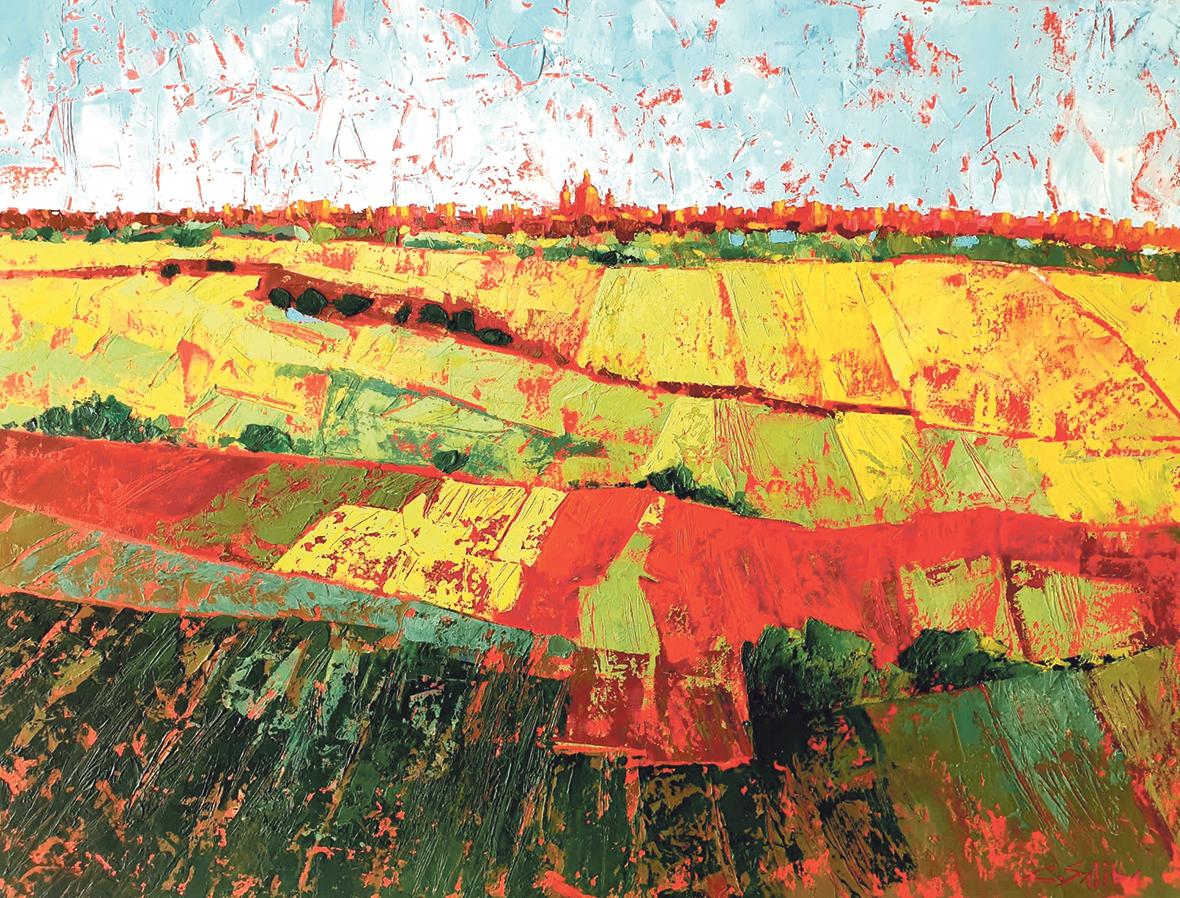