The EU's centre on gender equality has switched on the red light for Malta as the country scored with the worst seven European countries when it comes to gender equality in national parliaments.

Among others, the country fared worst when it comes to women and men having equal opportunities to enter Parliament, according to the European Institute for Gender Equality (EIGE).

Apart from just looking into the proportion of women and men among candidates and elected representatives, the report investigated whether constitutional laws directly refer to gender equality in political representation, and also whether and how gender quotas are applied.

According to the EIGE, while women are still numerically under-represented in parliaments across the EU and the European Parliament, the rise of electoral gender quotas has contributed to creating an upward trend.

Malta was also among the lowest performers when it comes to women’s interests and concerns having adequate space on parliament’s agendas.

It scored better when it comes to equal opportunities to influence Parliament’s working procedures and gender-sensitive legislation. The report mentions Malta as one of only nine member states that have publicly available information on mechanisms to prevent gender-based discrimination for MPs.

Each country’s scores have been flagged as green, amber or red. This traffic light tool by the EIGE is meant to help parliaments assess how gender equal they are. Through it they can also identify areas where they could do better and monitor their own progress.

Topping the list with a ‘green’ 88.2 is Sweden, followed by Finland.

The European Parliament also received a ‘green’ score of 75.8.

Carried out between April and June 2019, it is the first EU-wide assessment that analyses gender sensitivity and describes the state of play in all national parliaments in a uniform way. Among others, results show that in March of this year, 82 per cent of national parliaments in the EU were presided over by a man and only 28 per cent of committees were led by female MPs.

Similarly, women MPs are significantly under-represented in economy (22 per cent) and basic functions (21 per cent) committees, while socio cultural functions and infrastructure functions committees are closer to gender balance – 39 per cent and 38 per cent, respectively. 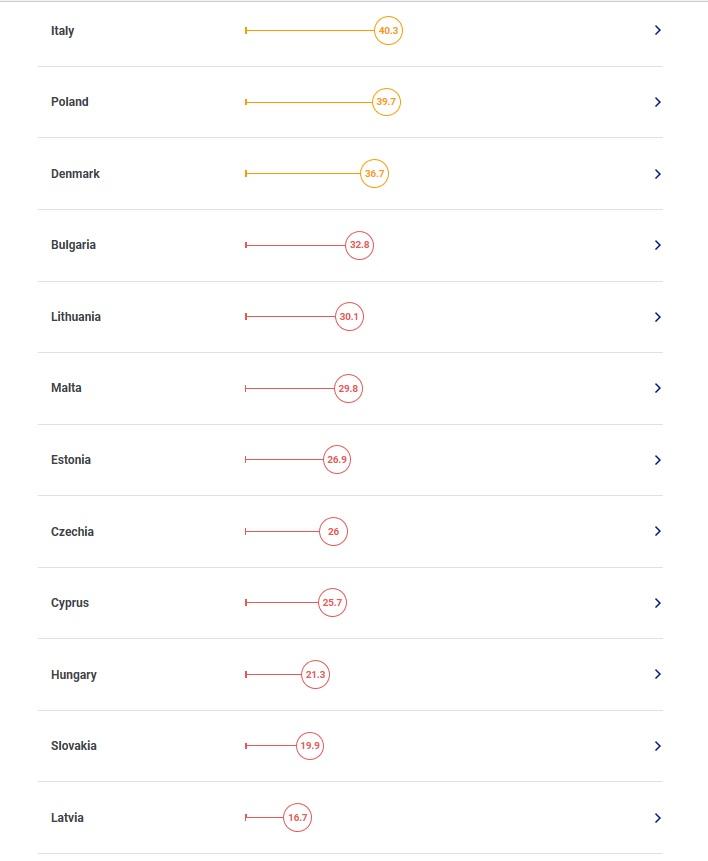