Like most radio show hosts, Meron Estefanos’s phone is a busy one, buzzing relentlessly whether she is on or off air.

But unlike most, when her chat show line rings, the calls do not come from someone seeking relationship advice, complaining about traffic or hoping to win freebies by guessing who directed Titanic or who was top of the charts that week. 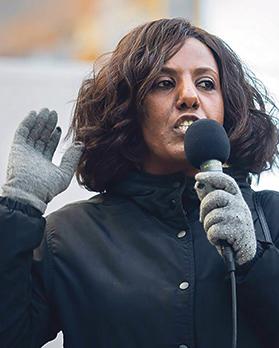 Instead, her callers are on board sinking migrant boats or locked inside gruesome Libyan detention camps.

“The calls can be harrowing, really distressful, and come in all forms. It could be an overcrowded boat somewhere outside Maltese waters or from migrants being held hostage or being tortured,” she told Times of Malta during a recent short trip to Malta.

Ms Estefanos left Eritrea some 30 years ago for Sweden, where she works as a journalist and refugee advocate. Since 2008, she has been fielding calls from Eritreans in peril on her weekly radio show Voices of Eritrean Refugees.

On the other end of the line, she says, are the desperate cries for help of fellow Eritreans, many of whom end up in Malta after having fled the repressive northeast African country.

“I started doing work as a journalist, being critical of the Eritrean government, but eventually moved into migration. It changes your life when you actually speak to these people like I have. It is transformative. You just aren’t the same afterwards,” she adds.

Some of her callers are kidnapped, tortured, raped or held hostage by traffickers somewhere between the desperate Sinai Peninsula in the east of the African continent and the Libyan coast to the north. And, for many, she is their only hope of survival.

“My number is handed out to migrants boarding boats from Libya and graffitied on the walls of Libyan detention centres,” she notes.

My number is handed out to migrants boarding boats from Libya

In a way, her radio show has, for years, filled the gaps in the EU’s migration policy, offering support from those trying desperately to get into Europe in much the same way other NGOs do, except she does it through broadcast media.

It has also evolved into a support network for those who made it to the EU but are living on fringe.

“Calls come from Malta too. They are mostly stories of rejection, discrimination, failed resettlement attempts…” she remarks.

The hardest, however, are distress calls from out at sea.

When a call with a 00888 number comes in, that means the caller is using a satellite phone and she knows this means they are bound to be calling from a sinking boat filled with wary and terrified migrants.

The first phone call she received from a boat in distress was eight years ago from an overcrowded vessel with about 425 people on board. They had close to no fuel, water or food and had already been stuck out at sea for days.

Ms Estefanos recalls how she remained in close contact with the migrants as the Maltese and Italian authorities quarrelled over who should be responsible for conducting a rescue operation.

In Malta, she met with some of the migrants who were eventually brought here, along with others who resettled on the island over the years. But her visit also gave her the opportunity to offer closure to the families of thousands of missing Eritreans.

She says a cache of tens of thousands of DNA samples held in Malta could be used by the International Commission for Missing Persons to bring an end to the suffering of so many Eritrean families.

Ms Estefanos hopes to gain access to the Maltese files containing the DNA records of unidentified deceased migrants brought ashore by Maltese rescuers over the years.

“A big part of the work I do is about offering closure to those who have lost someone dear to them through migration and human trafficking.

“This would be a big step in that direction,” she said.