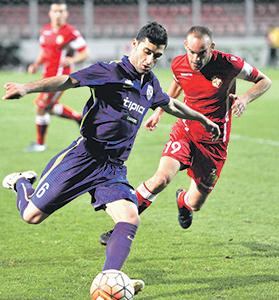 All to play for... Naxxar Lions and St Andrew’s will be hoping to avoid automatic relegation this evening. Qormi are also in the fight to beat the drop. Photo: Chris Sant Fournier

Naxxar Lions, St Andrew’s and Qormi head into their last game with their Premier League future in serious jeopardy but, ironically, the trio are still in with a chance of forcing a play-off with Senglea Athletic who finished third in Division One.

The relegation fight takes centre-stage this evening with Naxxar, third-from-bottom on 12 points, needing to beat Sliema Wanderers to seal their place in the play-off but the permutations are manifold.

St Andrew’s, two points behind, must win their duel with Qormi to have a chance of leapfrogging the Lions, provided the latter lose to Sliema, while a draw would condemn both the Saints and Qormi.

A draw for Naxxar and a win for St Andrew’s would take both teams on the 13-point mark, thus setting up another decider to determine who will face Senglea today week at the Hibernians Stadium.

Qormi looked doomed for much of the season but their 1-0 win over Sliema last weekend has given them a lifeline. The Yellow-Blacks can also force a decider with Naxxar if they overcome St Andrew’s and the Lions go down to Sliema.

A nailbiting evening looms for the three relegation candidates.

Clive Mizzi, the Naxxar coach, is hopeful that his team will approach their crucial clash with Sliema in the right frame of mind.

“The most important thing is that we approach the game in the best way possible,” Mizzi told Times of Malta.

“That was certainly not the case in our last game against St Andrew’s but in the previous match against Qormi, the players showed the right commitment and determination even though the result (1-1) was disappointing.

“It depends on us. Our destiny is in our own hands.”

Mizzi can’t send out his best formation as Daren Falzon and Ryan Grech are suspended while defender Ishmael Grech is out of the equation.

With Sliema Wanderers now devoting all their attention to the FA Trophy semi-final against Birkirkara tomorrow week, coach Alfonso Greco may rest a few players. Mark Scerri and Stefano Bianciardi are suspended.

Both Qormi and St Andrew’s go into their direct clash with a positive mindset after emerging victorious from their last games.

Qormi stunned Sliema while the Saints had the better of Naxxar, 3-1.

The fate of the bottom two sides depends on the result of the Naxxar game but Josè Borg, the St Andrew’s coach, is focusing only his team’s assignment.

“The game against Qormi is our top priority because we have to win at all costs to keep our hopes alive,” Borg, whose appeal against his 10-match touchline ban was rejected by the Malta FA, said.

“A draw would see us both relegated, so we have to win and then wait for the outcome of the Naxxar-Sliema game.”

Coach Johann Scicluna knows that Qormi are the underdogs as a draw for Naxxar would end their top-flight stay, regardless of the result of their clash with St Andrew’s, but he’s not giving up hope.

“We still have a fighting chance of avoiding automatic relegation going into the final day of the season,” Scicluna said.

“The morale of the team is good but just because we’ve beaten Sliema doesn’t mean that we are thinking big.

“This will be another final for us but we still believe that we can force a decider. Of the three relegation strugglers, we are the team that has gained most points (four) from the last two games.”

Tarxien Rainbows have taken up the option to extend Alex Alves’s deal by another year.

The Brazilian right-back, one of the best flank players in the Premier League this season, has played his last match for the Rainbows this season though, as he is suspended for today’s game against Floriana.

Joao Pedro must also serve a one-match ban while Spanish midfielder Carlos Hevia is injured for the Rainbows who will be looking to close a positive campaign on a high.

Floriana have little to play for after missing out on a top-four finish and qualification to the semi-finals of the FA Trophy.

Argentine captain Nicolas Chiesa and Italian striker Matteo Piciollo return for the fifth-placed Greens after suspension kept them out of the 4-2 win over Mosta.

Birkirkara and Balzan will be seeking to attain a morale-booster ahead of the FA Trophy semi-finals when they meet in their final league match tonight.

The Stripes moved above their impending opponents in third place after their 2-1 win over Hibs – pending the outcome of the latter’s protest which will be heard this afternoon – but Balzan will draw level with their neighbours if they win today.

Drazen Besek, the Birkirkara coach, must make some changes to his team as Nigerian winger Frank Temile is suspended while Ryan Scicluna and Joseph Zerafa are sidelined with injuries.

Left-back Ryan Camenzuli may return after missing the Hibs win through injury.

Balzan coach Oliver Spiteri must make do without midfielder Paul Fenech who was handed a one-match ban in midweek.

Spiteri may opt to reshuffle his pack ahead of Balzan’s FA Trophy semi-final tie against Pembroke Athleta on May 8.

Bojan Kaljevic, who netted Balzan’s temporary equaliser in the 2-1 loss to Valletta, may be in line to start as the Montenegrin striker is short of match practice after an injury-ravaged season.