Jonathan Caruana was a relieved man on Friday after the former Malta defender attended his first training session with his club Valletta following a ruling by the Court of Arbitration of Sport (CAS) over his doping suspension.

The 32-year-old had been fighting his innocence for the past 17 months after he was found to have failed an out-of-competition doping test carried out by Malta’s National Anti-Doping Organisation (NADO).

Caruana had a doping test in March 2017 and the following month he was informed by NADO that traces of a banned substance had been found in his urine sample.

He was immediately suspended by the Malta Football Association pending his hearing.

Caruana subsequently appeared in front of the NADO Disciplinary Commission in two hearings which took place in August and September 2017.

He contested their findings, arguing that he did not make use of a banned substance and the outcome from the test was the result of a contaminated product.

His arguments were based on the fact that he had tested a supplement which he was taking at the time, upon the advice by the NADO itself, results for which were first confirmed by the NADO that it was contaminated, only for them to say that the result was misinterpreted later on.

However, the NADO board contended that the player did not provide enough proof to show his innocence and handed him a four-year suspension from football.

Caruana continued to maintain his innocence and backed by his club he took the case to the Court of Arbitration of Sport to appeal to NADO’s sentence.

The Swiss-based court analysed the case and on Thursday it announced that Caruana’s ban should be reduced to six months, paving the way for the experienced defender to return with his City team-mates yesterday.

Caruana was able to prove his innocence after testing all of the supplements he was taking in an American and WADA accredited lab, whereby one of the said supplements resulted as being contaminated with the same banned substance found in his urine.

I am truly overwhelmed by all the messages and calls congratulating me on the amazing news, thank you all! None of this would have been possible without the help and support of the people who were behind me since day 1 of this nightmare; you know who you are

“I’m relieved that this nightmare is finally over,” Caruana told the Times of Malta.

“I have always maintained my innocence and I am delighted that the Court of Arbitration of Sport has accepted my stance that I was a victim of contamination and reduced my suspension.”

Caruana said that the past months have been very difficult for him and said that he had no words to thank his girlfriend Daniela Bugeja and Valletta FC, particularly vice-president Alexander Fenech, for their constant support during this difficult time.

“Daniela was always behind me along with the club and Alexander Fenech. Their constant support was very helpful,” he said.

“Valletta FC gave me their full backing from day one. Their support was what I needed most throughout the past months.

“Alexander and Daniela took the case in their hands and let me fully concentrate on keeping myself in a good physical shape.

“Although I could not train with my team-mates during my suspension, I continued to practise alone everyday and for this I would also like to thank my personal trainer Karl Sciortino.”

Now that he can resume his football career, Caruana said that he has set no individual objectives for the season.

“My only goal now is to return to the first-team and help my club achieve their objectives for the current season,” Caruana said.

“Obviously, having been out for so long, I need time to regain my match fitness but I’m ready to work hard to make myself available to the coach in the shortest time possible.

“Valletta FC mean everything to me and I am determined to repay their faith in me by doing everything I can to lift the side to higher levels in the championship.”

Meanwhile, NADO issued a statement to clarify reports in other sections of the media.

“Contrary to what is being claimed in certain parts of the media, there was no mistake with the testing procedure and laboratoratory analysis of Mr Caruana’s sample,” NADO said.

“His sample did contain a prohibited substance, more specifically Ostarine, which Mr Caruana, later proved that he had ingested through a contaminated supplement.” 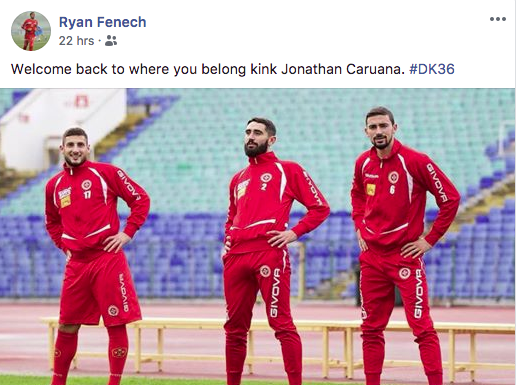