Archaeologists excavating at Tas-Silġ in Marsaxlokk have discovered the remains of another Neolithic structure.

The newly-unearthed structure, still being excavated, has substantially increased the footprint of the land used in the Neolithic period at this site.

They were shown around the site by David Cardona, senior curator for Phoenician, Roman and Medieval sites within Heritage Malta, and by Professor Nicholas Vella from the Department of Classics and Archaeology at the University of Malta. 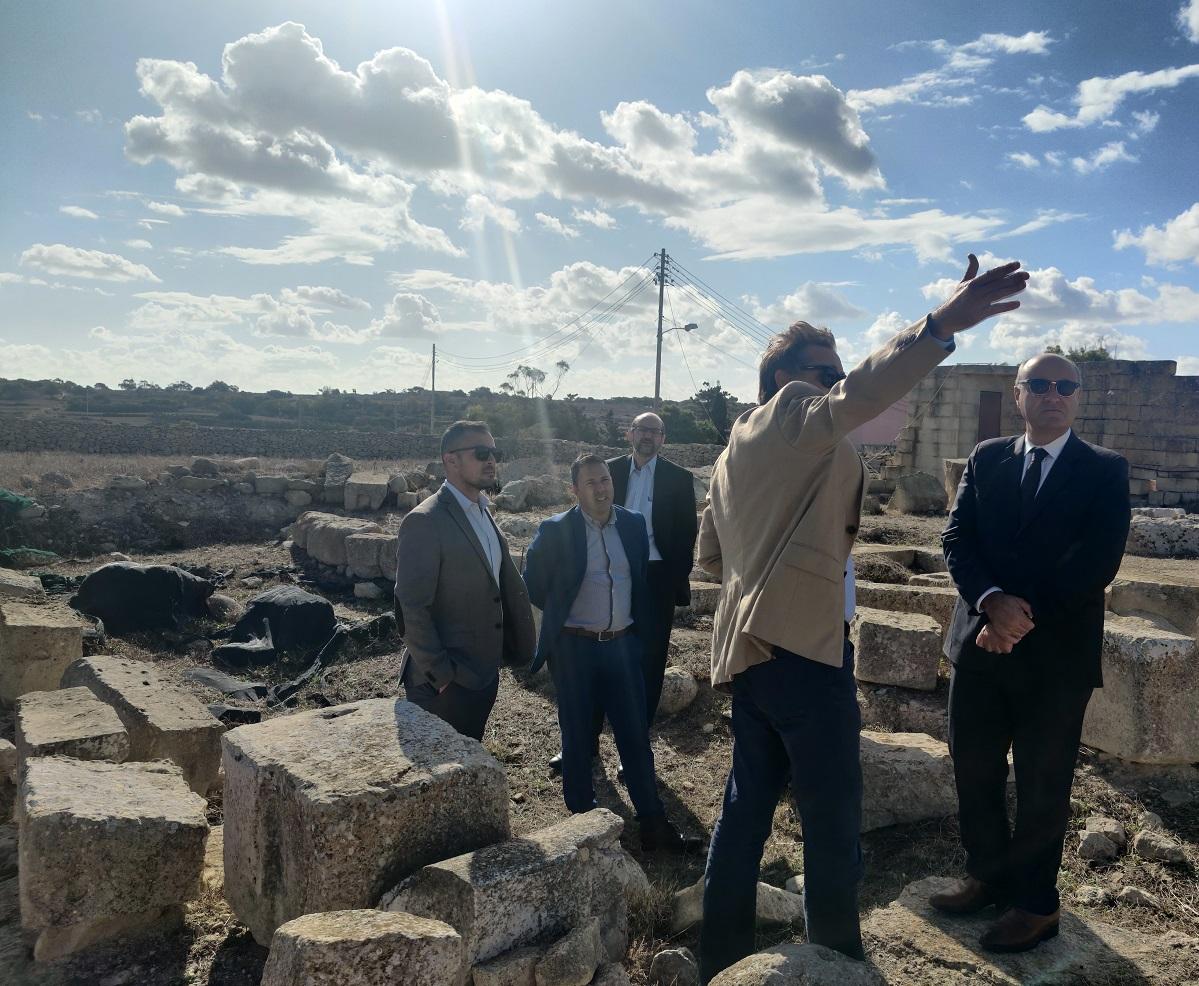 The current excavation project at Tas-Silġ is a joint collaboration between Heritage Malta and the department.

Cardona pointed out that this project is being implemented over a number of years and is divided into different phases, since by its very nature Tas-Silġ makes any project within it more complicated than other sites.

Tas-Silġ is the site with the longest known use on the Maltese Islands, with remains of at least three temples from the Tarxien phase of the Maltese Neolithic period.

The same temples were also used in the Bronze Age, possibly the only period in Tas-Silġ’s history when the site was not utilised for rituals or religious purposes.

Upon the Phoenicians’ arrival, a temple in honour of the goddess Ashtarte was erected. It continued to be delevoped further by the Punics and the Romans until at least the second century AD. 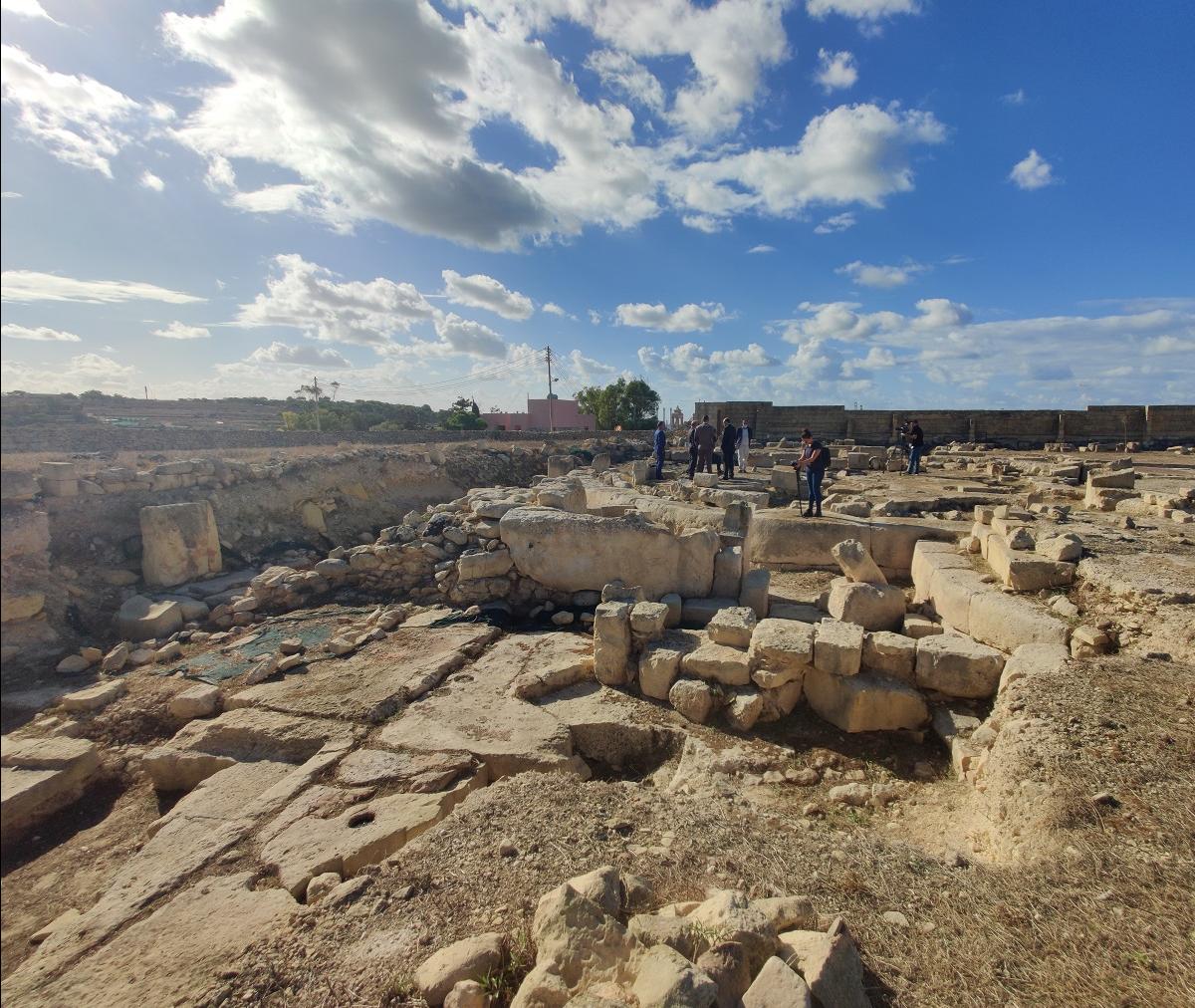 Many years later, the temple’s main courtyard was roofed over and turned into a Christian basilica – the first evidence of a church built in Malta. This was the last moment in history when the site was used for religious purposes.

Eventually the church was abandoned, nearly all structures were demolished, and the land started being toiled for agriculture. This state of affairs continued until excavations by Sir Temi Zammit in the 1920s, and then by the Italian Archaeological Mission and the University of Malta in the last three decades, unearthed the remains of these buildings.

Herrera said the site at Tas-Silġ probably continues further beneath the road which effectively divides the site in half.

As evidenced by the newly-found remains as well as by a sizeable Phoenician cistern accessible from the site, underneath this road there are probably more remains, as yet undiscovered, from the site’s various phases.

It would therefore be wise to deviate this road as foreseen in the local plan, the minister said.

Zammit said that Heritage Malta, while proceeding to scrutinise the newly-discovered remains which most probably continue beneath the road, is preparing a geophysical investigation of the road and the adjacent areas.

The many layers of history that shape Tas-Silġ’s past make this site one of the most difficult to understand, and even more difficult to preserve. However, Heritage Malta is drawing up plans and designs to improve the site’s visitor facilities and interpretation.

Farrugia said that ever since Heritage Malta took over the management of the site, the Superintendence of Cultural Heritage has always fully collaborated with the agency to ensure that all necessary investigations and any conservation measures required for preservation are carried out in a timely manner.

The latest investigations, which are shedding new light on the prehistoric significance of the site, are of the utmost importance since they have extended the prehistoric presence in the area way beyond what was previously believed.

These investigations have confirmed that the extent of the site, in different periods, extended beyond the boundary walls set up in the past to safeguard the site. It is now high time to carry out discussions amongst all national stakeholders to provide a holistic approach towards the management and presentation of the site.

Vella said the progressive discovery of the Neolithic structure, being unearthed by students of the Department of Classics and Archaeology together with academics and researchers from the department and colleagues from Heritage Malta, is a relevant result in the shaping of the history of Tas-Silġ.

This particular discovery has shed new light on the site’s Neolithic use, spurring further exploration of the structure’s context in relation to other remains from the same prehistoric phase in the area.

This will entail exploration of the structure’s surroundings, even beyond the site’s current boundaries, in the road dividing Tas-Silġ.

This joint excavation experience between the department and Heritage Malta needs to continue to compose a clearer picture of the history of this unique site, Vella said.