Not many people know that there is a crater on Mercury named after a Carmelite nun. Historian Susanna Hoe speaks to Sarah Carabott about this woman from the 17th century and others in Maltese history whom most of us have never heard of.

When the Knight’s pharmacist died in 1590 and the Inquisitor’s director of courts passed away in 1760 their posts were both filled by women.

Born a year after the Great Siege, and brought up in Valletta, Caterina Vitale married the Neapolitan Ettore Vitale, chief pharmacist to the Order of St John.

Following his death, the 27-year-old took over his pharmacy, providing medicines to the Sacra Infermeria, making her probably the first female chemist on record in Malta.

This “incredible woman” is one of the lesser-known females (except among scholars) who left their mark on Maltese history, joining prominent figures such as newspaper proprietor Mabel Strickland and the island’s first female president Agatha Barbara. 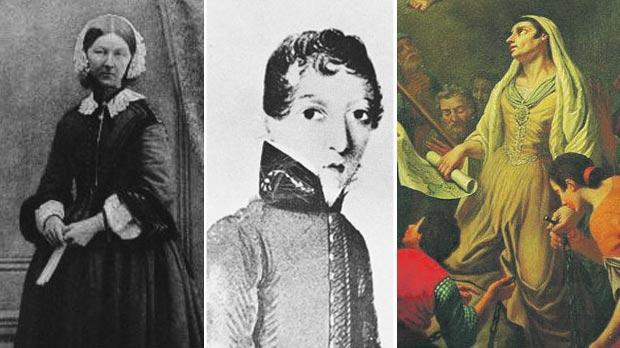 Another notable widow was Vincenza Matilde Testaferrata who, husbandless and pregnant, inherited her husband’s office of Depositario within the Inquisition.

The Depositario, who headed the administrative staff of the Inquisitor’s Tribunal, was equivalent to the present-day Director of Courts, and being the accountant of the tribunal, he took care of all payments, including the Inquisitor’s salary.

Writing about women in history is challenging, Ms Hoe finds. Since most documented history is about men, she has to tease out little bits of information about women from different sources

Testaferrata features in women’s historian Susanna Hoe’s book called Malta: Women, History, Books and Places, the fourth in the series Of Islands and Women following her books on Madeira, Crete and Tasmania.

For Ms Hoe, Malta is much more than Knights of St John and Second World War heritage – in her book she recounts the tales of women who made a contribution to Maltese history stretching back 7,000 years.

Some of them are a bit better known than others. Maria de Dominici, Malta’s first established female artist, has a crater on Mercury named after her. Born in 1645, she was a Carmelite tertiary nun, living not in a nunnery but in the community.

Writing about women in history is challenging, Ms Hoe finds. Since most documented history is about men, she has to tease out little bits of information about women from different sources.

Gathering information from cemeteries, libraries, the internet and the streets, she started peering into the lives of women in Maltese history two and a half years ago.

She spoke to this newspaper just before heading off to a local press, which is printing her book this week. It will be launched soon in London.Sitting down on a sofa in the same hotel she had stayed in overnight 63 years ago with her parents on the way to Kenya and back, Ms Hoe delves into one of the more curious women she writes about: James Miranda Barry, who arrived here as a male doctor.

She had disguised herself as a man ever since she started training and her sex was not revealed until her death. In 1812, aged 17, she was awarded her MD from Edinburgh, making her, technically, the first woman in Britain to qualify as a doctor.

Dr Barry, small, with delicate hands and a squeaky voice, joined the army and was promoted to surgeon in 1815. She arrived in Malta aged 50 and served here for four and a half years, while living in Sliema.

Her disguise was not foolproof. Her landlord wrote about her: “This devil has to be a woman” (dan ix-xitan ghandu icun mara).

Another person who had a dislike for Dr Barry was Florence Nightingale, who was in Malta twice, once as a tourist and then as a nurse. She wrote about Dr Barry: “I never had such a blackguard rating in all my life – I who have had more than any woman – than from this Barry sitting on his horse, while I was crossing the Hospital Square with only my cap on in the sun… After he was dead, I was told that (he) was a woman… I should say that (she) was the most hardened creature I ever met.”

Women of the Great Siege who fought alongside men

Thousands of nameless women fought alongside men as the Turks laid siege on the island.

They also provided food for their families and cared for the sick, injured and the dying.

They gave birth set against a backdrop of fighting… and this painful and laborious act was not limited to married women.

Sister Catherina Casha was one of some 20 nuns from the two Benedictine convents in Mdina who were transferred to the house of Don Gioseppe Bellie in Vittoriosa for their own safety.

There, she started complaining of abdominal pains, which raised suspicions of pregnancy among the two other nuns.

She consumed medicine prepared by a slave but in due course gave birth to a stillborn with the aid of her sibling Sister Cilia.

The first woman ‘Knight of Devotion of the Order’

For many, the great battle fought 450 years ago conjures up images of men in shiny armour fighting off Ottomans clad in turbans.

But at least one of these ‘Knights of Devotion of the Order’ was female.

Donna Eleonora Spadafora Sambuca’s father, Count Federico had various dealings with the Knights of Malta and, in 1585, he exempted the Order of St John and its Maltese subjects from paying him taxes for some food provisions he provided.

To show their gratitude, the Order bound itself to nominate his firstborn as a knight.

The count died in 1598 and Eleonora, who had inherited his feudal rights, wanted to claim the title promised by the Order.

After a lot of toing and froing, the knights were obliged to give in and create the first woman Knight of Devotion of their Order.