We are marking the 30th anniversay since St John Paul II set foot on Malta. The  historic pastoral visit that took place between May 25 and 27, 1990, marked the first time a pope visited the island of Paul.

United behind the theme ‘One Heart with the Pope – Qalb Waħda mal-Papa”, the Maltese people ensured an astounding welcome to John Paul II. 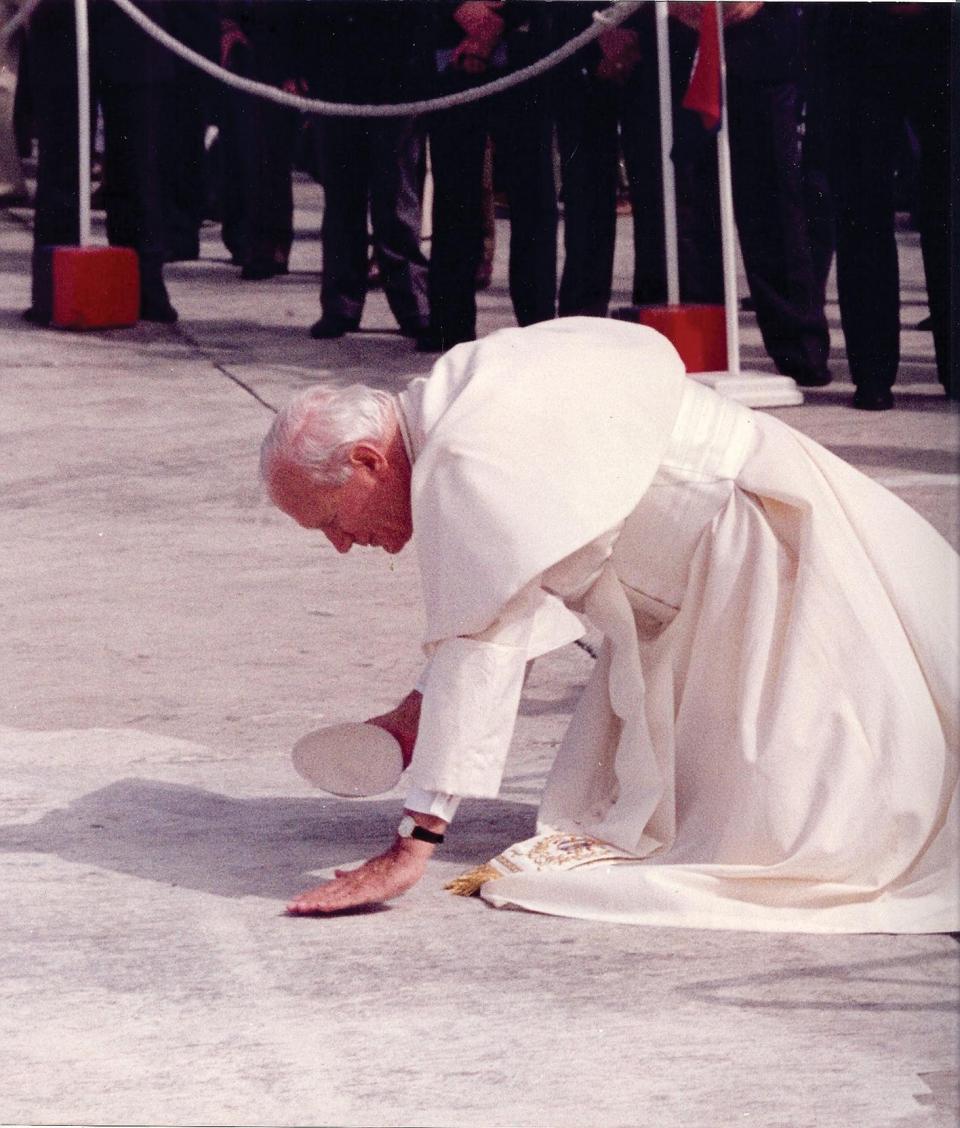 People close to the pope did not hide how impressed they were with the kind of enthusiastic, fervent, glowing, colourful and heartfelt welcome the people of the Maltese islands reserved for the Holy Father, who presided over 13 events.

“Siete state meravigliosi,” a member of the pope’s entourage told me at the end of the visit. Another described the pope’s entrance into Grand Harbour as “a magnificent and marvellous experience” and something he had never seen anything like it in all the pope’s previous 47 trips outside Italy.

Foreign journalists were very impressed too. Il Mattino’s representative wrote that the pope was welcomed by “a whole island in feast” and “an hosanna crowd along all the roads”.

John Paul II himself, visibly moved, repeatedly exclaimed: “Gente buona, gente buona.”  The pope had said that the direct contact he had with the Maltese people gave him the opportunity to become aware of “the pride and nobility of these people, adding that he would preserve close to his heart the memory of the warm welcome given him”.

John Paul II visited us again in 2001, when he beatified Dun Ġorġ Preca (later canonised), Nazju Falzon and Sr Maria Adeodata Pisani OSB, while in 2010 we also had pope Benedict XVI coming to Malta. Now, we are awaiting to eventually also receive with much joy Pope Francis. 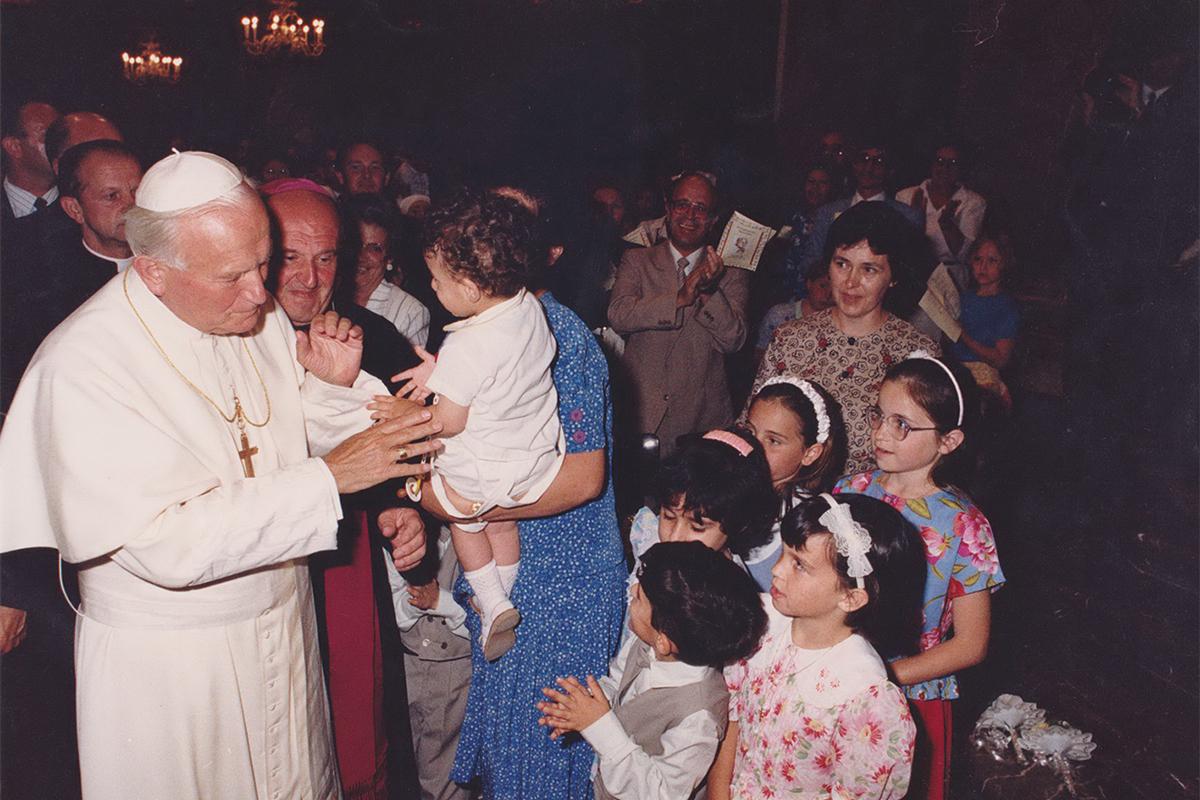 John Paul II blessing children and members of the congregation.

Reflecting on what our country and our people have been through 30 years on since John Paul II’s first visit, I imagined him sending us a fresh message, something on the following lines:

“It is now 30 years since I had the joy of being the first pope to visit your beloved islands. My gratitude to all who helped to make that historic visit possible and for the very warm reception accorded me.

“I am writing from the Father’s house, where I have been staying for the past 15 years. Here I met Paul of Tarsus and told him about Malta. I told him: ‘Paul, do you remember Malta? Do you remember that you founded a Church in Malta? I found, after so many centuries, that it is wonderful Church. Malta has good Catholic people.’

“Paul was a bit curious to know whether I visited his Grotto, in Rabat. I told him that it was a privilege for me to spend a few moments in silent prayer at that ancient Grotto, venerated as his dwelling during his stay in Malta. Paul then asked me for my general impressions about the kind of Christian witness I found among you, the people of Malta. I replied that throughout my time in Malta, I was impressed by the deep attachment of the Maltese people to their cultural and religious heritage. I added that in the people’s desire to be faithful to this precious legacy I saw a sign of great hope for Malta’s future. Moreover, I appreciated the Maltese traditions as a wonderful expression of the people’s national character and identity, and prayed that they may continue to guide their steps and strengthen their resolve. 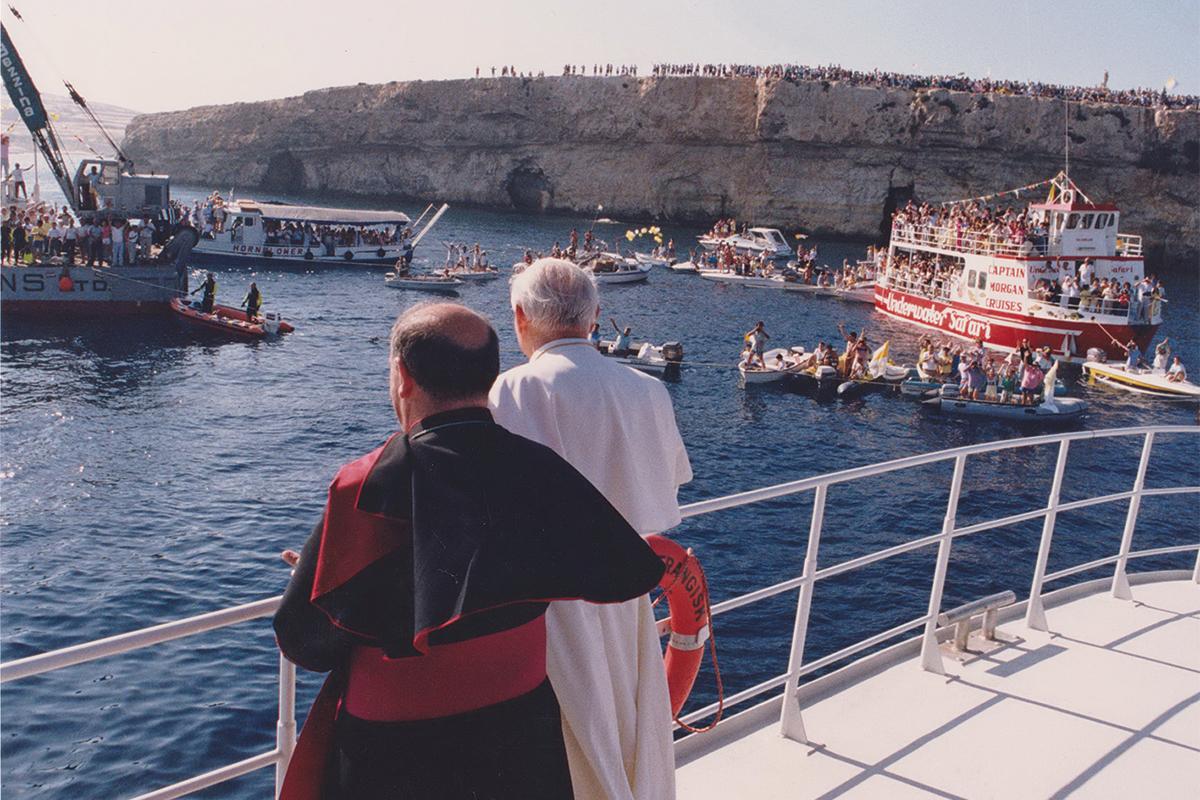 John Paul II during an activity in St Paul’s Bay in his honour.

“I went on to tell him how during my 1990 visit I appealed to all who had the good of your nation at heart – political and social leaders, workers, intellectuals, the young people, as well as the members of other Churches and ecclesial communities − to apply to the challenges of their era the Christian vision they had inherited from their past.

“In making this appeal, I was confident that the Maltese people would be working together generously and effectively to create a society inspired by the highest ideals of truth, honesty, justice and peace, also marked by special and genuine attention to the needs of the less fortunate members of the community. Of course, this also applies to the asylum seekers and migrants who reach the shores of Malta in their often desperate flight from persecutions,  war zones and conflicts, tragedies, destitution and other tribulations. 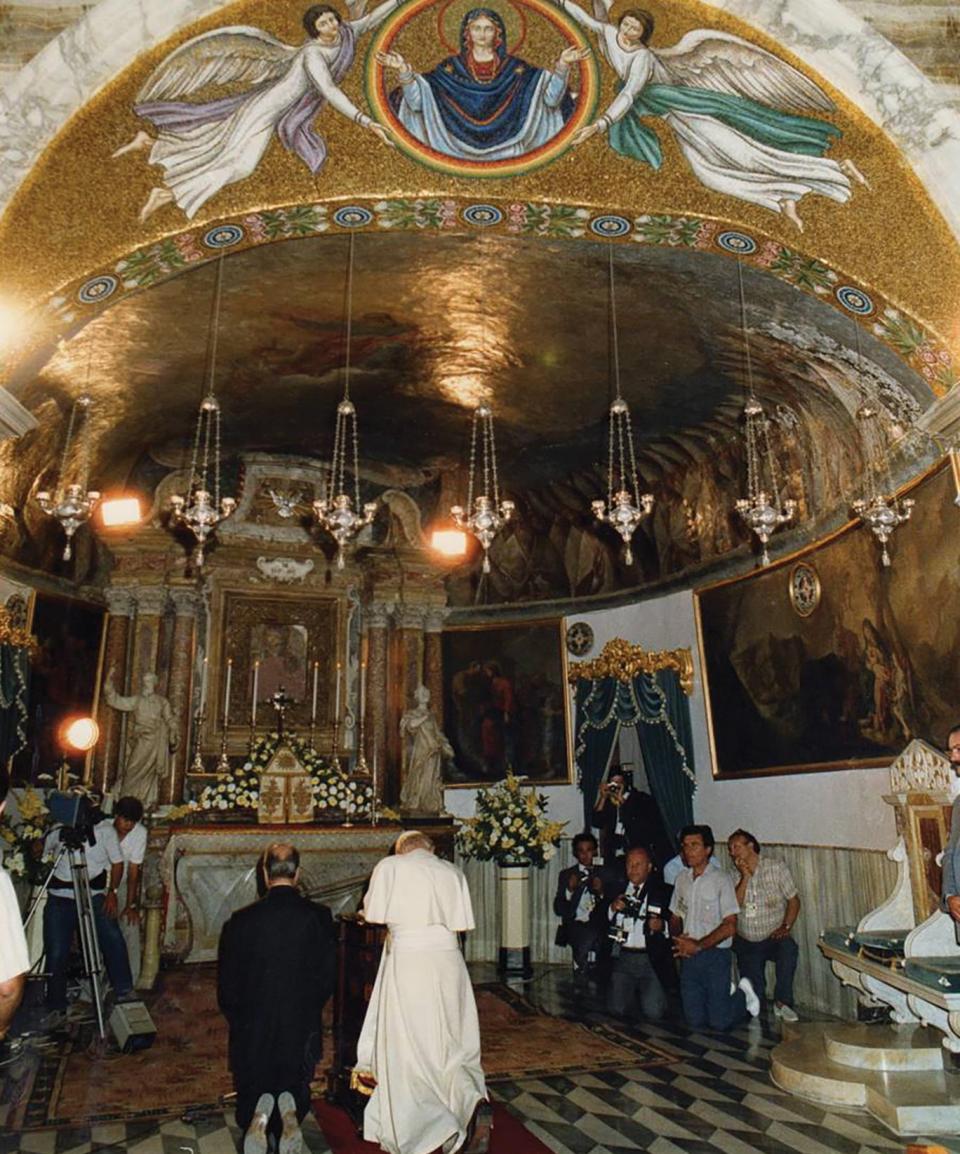 The pope praying in front of the ‘Madonna tal-Mellieħa’ with Mgr Philip Calleja, who was the principal local organiser of his visit.

“Thirty years on, I wish I could physically visit your islands once more to see how you are weathering the modern day challenges, such as indifference to God and His will, individualism, secularism, relativism, materialism, hedonism and certain hazards such as  corruption.

“Since such a visit is not possible, allow me to invite you, through this message, to renew yourself spiritually: to open your hearts to God. Naturally, a call to renewal is likewise a call to consistency – consistency between faith and Christian living. A community of faith and prayer must show forth in its conduct what it professes and proclaims. The belief of the Church must be expressed in the private and public life of her members. Consistency must be manifested through an ever more visible and vital Christian witness in all the roles and functions in which the faithful find themselves.

“The Christian challenge – the call to consistency – involves decisive choices and sacrifices for everyone; it makes claims on those in humble conditions, as well as those with lofty responsibilities. For every category of people Christianity has the same requirements: to embrace Christ in faith and to apply his teachings to the concrete situations of life.

“May you offer to the gentle Pope Francis the same kind of amasingly warm welcome you gave not only to me in 1990 and then again in 2001, but also to my good friend Pope Benedict XVI in 2010. May Francis’s pastoral visit instil in you a deep desire to renew yourselves in your Maltese heritage of Christian values. May love and harmony always dwell in your hearts, in your families and in your homes. God bless you.”

Charles Buttigieg is the former public relations officer of the Curia. 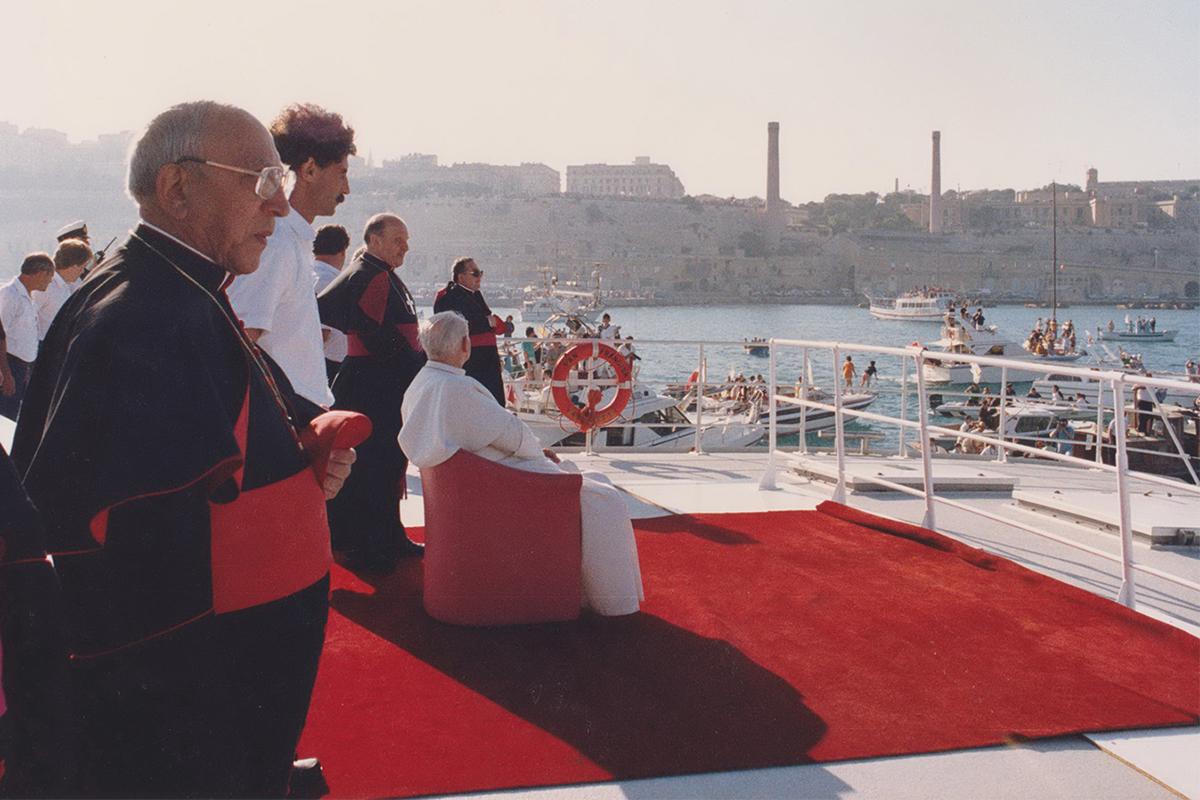