During its unveiling, nobody suspected that the Floriana War Memorial would eventually commemorate not one world war, but two. As the obelisk celebrates the 70th anniversary of its second inauguration in 1949, Greta Xuereb recalls the monument’s fascinating history and that of the man who designed it, the artist Louis Naudi.

The unveiling of the War Memorial in Floriana on Remembrance Day, November 11, 1938, was described as “an unforgettable event” for Malta in contemporary news reports. 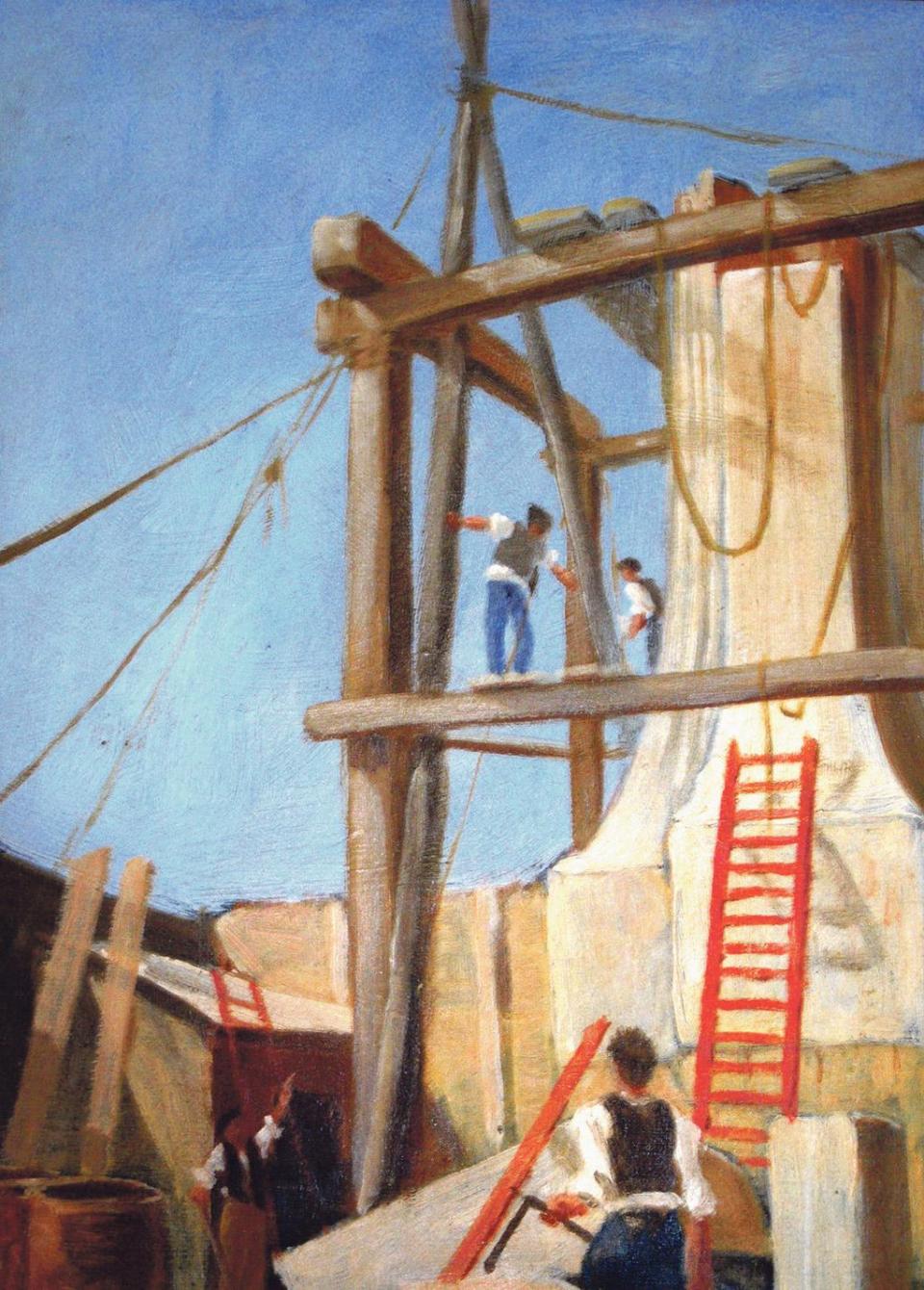 That sunny day, the memorial was covered in bright flags and from early morning, women were selling poppies to the dense crowds gathering to watch the spectacle.

After inspecting the Guard of Honour, the Governor of Malta, Sir Charles Bonham Carter, performed the unveiling ceremony, while the Royal Malta Artillery (RMA) Band played God Save the Queen.

“Then a gun fired... and a great hush fell,” The Times of Malta reported. “For two minutes, the Empire upon which the sun never sets communed with its dead… The silence was broken only by the cries of a baby in the gardens nearby [until] the gun fired a second time [and] the trumpeters of the RMA sounded the Last Post.”

Apart from several dignitaries and foreign diplomats, the Royal Navy, Army and Air Force and the Malta Police were also present, together with the Royal Engineers and the King’s Own Malta Regiment. The atmosphere was unusually sombre and the Governor’s speech conveyed a strong sense of unease.

“[After the end of the Great War], we held a firm belief that we had made the world a safe place for our children and [...] we hoped that the disaster of a Great War would never recur,” the Governor said. “[But] we must confess, I fear, that the bright hopes of those days have not yet been realised and that the situation today is little better than it was 20 years ago.”

The air was then filled with the intense smell of flowers and the sound of rustling leaves, as more than 150 wreaths were laid carefully at the base by consuls, associations and organisations. 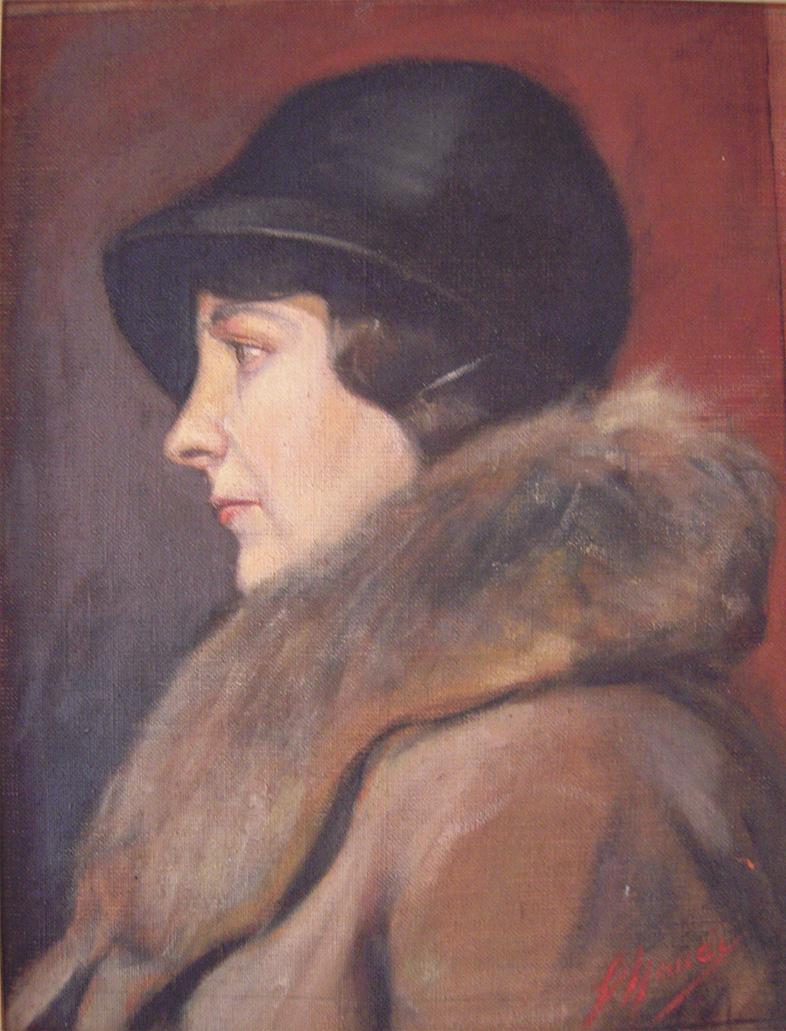 Naudi’s Portrait of a Lady.

Chillingly, photographs of the event show that the wreath laid by the German consul bore the Swastika, the full significance of which had not yet been fully understood.

And barely 19 months later, Malta’s first air raid would sound at 6.50am on June 11, 1940, plunging the island headlong into the Second World War.

The Floriana War Memorial is one of Malta’s best-known landmarks, yet little is known or written about the man behind the memorial – perhaps, just as he would have wished.

If you had to zoom into photographs of the crowds watching the 1938 ceremony, perhaps you might just be able to spot a young couple, Vida Grima and Luigi Naudi, a man in his early 30s. Grima recalled being puzzled by Naudi’s invitation to the sombre event and it was only during the ceremony that she realised that her new friend had designed the memorial himself.

Luigi Naudi – or Louis – as he was usually called, was born on September 1, 1907, in Sliema to a family of jewellers and silversmiths.

His paternal grandfather, Giobatta, had been the national Consul for Goldsmiths and Silversmiths, and his father, Alfredo, was Keeper of Gold and Silver Pledges at the Monte di Pietà in Merchants Street, Valletta. Artefacts produced by generations of the Naudi family can be found in various collections, including the Mdina Metropolitan Cathedral Museum. Similarly, his mother, Carmela Preca was descended from a family of jewellers. 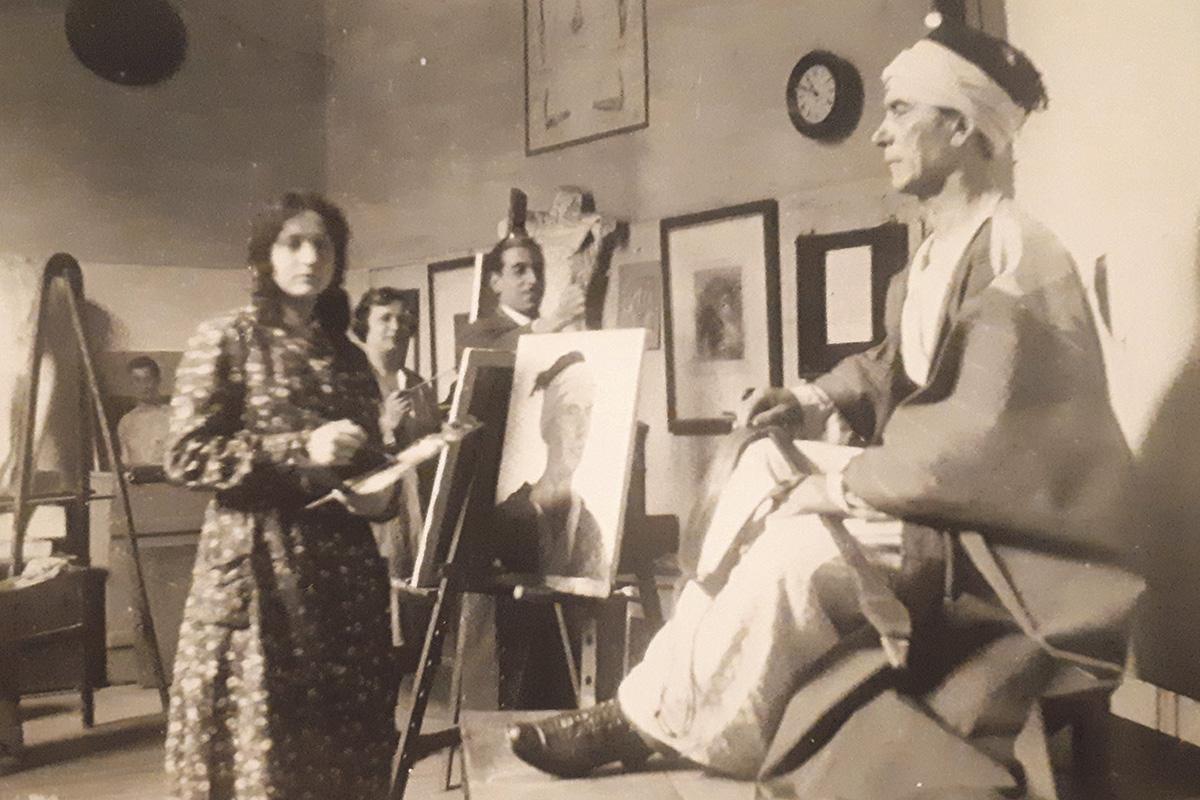 Naudi (centre) with colleagues and a model during a life painting course at the British Academy in Rome.

Chillingly, the wreath laid by the German consul during the unveiling ceremony bore the Swastika, the full significance of which had not yet been fully understood

Unfortunately, Naudi’s father passed away suddenly in 1919 and Luigi Naudi turned away from the cold glow of metals towards the jewelled brilliance of oil paint.

After studying at Stella Maris College, Naudi joined Ramiro Calì’s art studio, and later, the Malta School of Arts under Edward Caruana Dingli, where his work earned him a four-year scholarship at the British Academy of Arts in Rome. His 1930 passport letter of recommendation was signed by Sir Temi Zammit, from the Museums Department in Malta.

The leather album Naudi compiled during his Rome years is fascinating. In one photo, he is tanned and long-haired with friends riding donkeys in sunny fields. In others, he is laughingly playing the mandolin or painting with colleagues at life classes. 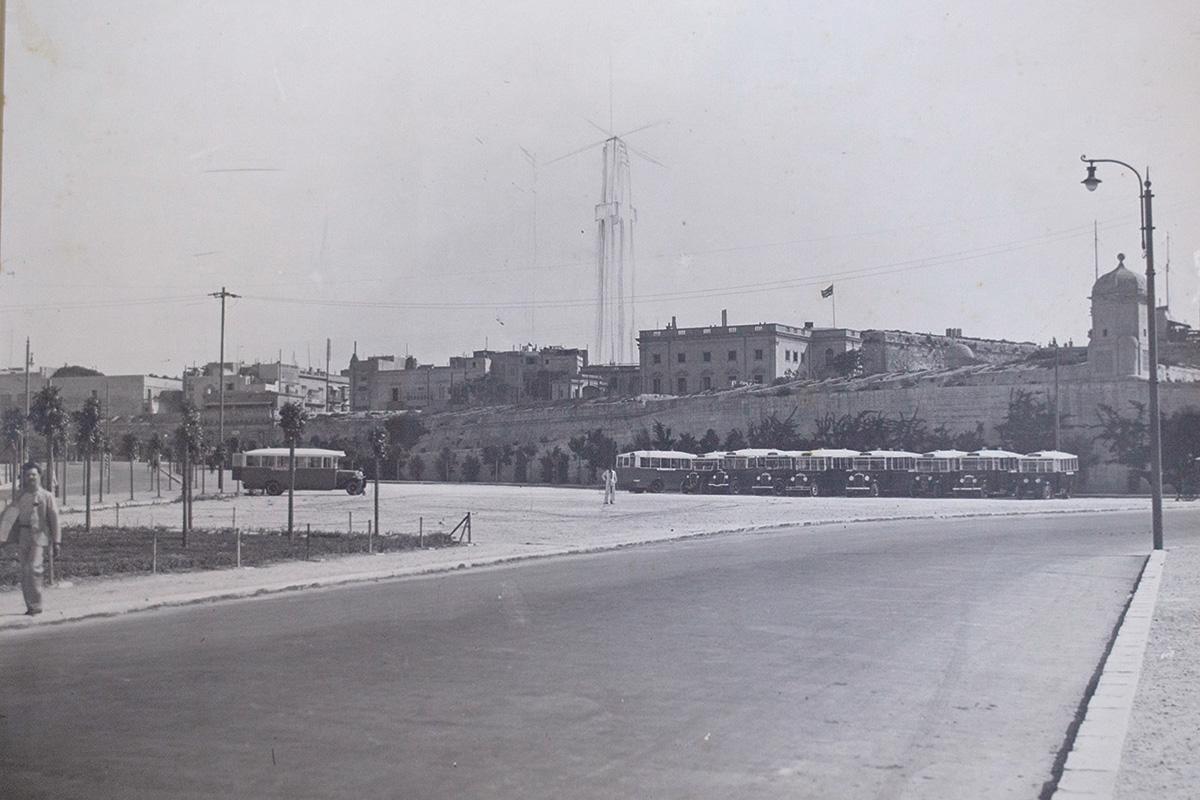 A photograph of the original site chosen for the War Memorial with Naudi’s own sketch superimposed in pencil. Naudi himself is standing on the site in a white suit.

Known for his quirky sense of humour and dark complexion – which earned him the nickname Biondino – Naudi was reluctant to return to his homeland after the end of his course. Yet there was a sense of trouble brewing in Italy during this idyllic and bohemian period of his life.

During the 1930s, the Fascist party’s aggressive paramilitary action squads – known as camicie nere (Blackshirts) – would regularly march through Rome in sinister black uniforms, sometimes accompanied by Prime Minister Benito Mussolini himself. During one parade, Naudi was manhandled for having failed to make the Fascist salute, only narrowly escaping corporal punishment.

The British Academy in Rome itself closed down in 1936, two years after Naudi’s graduation, when economic sanctions were imposed on Italy after its invasion of Ethiopia.

Perhaps it was this atmosphere of unrest which inspired Malta’s Governor, Sir Charles Bonham Carter, to launch a public design competition for a prominent war memorial in Malta. The memorial was intended to commemorate the 592 Maltese heroes who had lost their lives during the Great War of 1914-18 and the entire project had a budget of £3,000, which was a significant amount at the time.

Emboldened by his recent graduation, Naudi submitted two designs to the competition, one of which was an intricate, baroque-style column, the other a more experimental art-deco design based on four crosses each symbolising the north, south, east and west – suggesting the universality of suffering caused by the First World War.

It was Naudi’s striking modern plan which was selected by the panel of judges in 1935, beating submissions by established architects and sculptors, including Antonio Sciortino, the very director of the British Academy where Naudi had studied.

The 15.2-metre-tall War Memorial was then constructed to Naudi’s design using hard stone quarried in Gozo and assembled at the mid-point between City Gate and Glormu Cassar Avenue in Floriana. 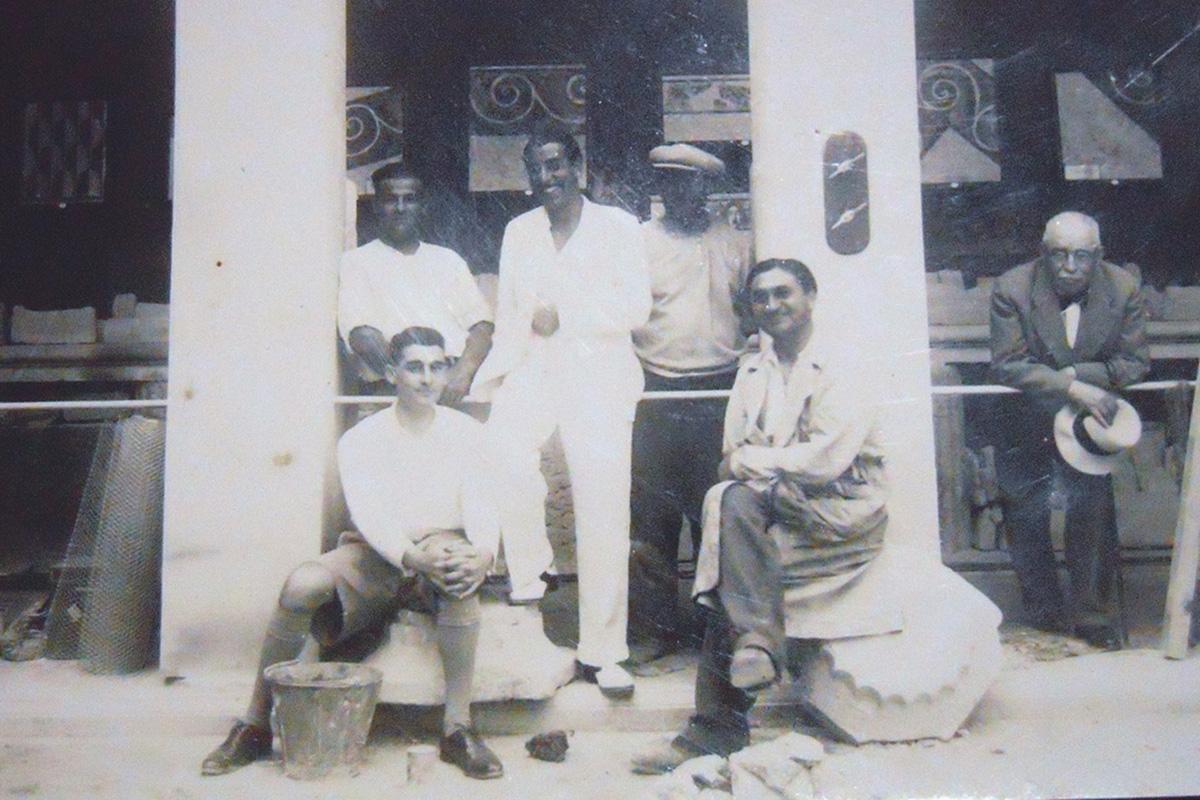 Naudi (in white suit, centre) with Museum Department colleagues at the Roman Villa. Sir Temi Zammit (1864-1935) can be seen at the far left.

The clean parallel lines and geometric structure of Naudi’s obelisk reflect the rapid technological advancement and automation of the early 20th century, which inspired both excitement and dread. Modernist artists and writers felt a distrust of appearance and decoration, taking refuge in abstraction and pure form.

It is also significant that the crosses in Naudi’s majestic work appear to be in motion, irrevocably descending and extending outwards towards the viewer on two sides. This sense of relentless movement has caused the design to be linked to Italian Futurism, with its emphasis on machinery and speed. Naudi may plausibly have been exposed to Futurist architecture both directly during his studies in Rome and also through the influence of Sciortino.

Naudi is specifically credited with saving Mattia Preti’s largest painting, the famous Martyrdom of St Lawrence in 1941, during one of the worst air raids to hit the islands

The Floriana War Memorial remains the only example of Naudi’s large-scale design work, as he subsequently withdrew from the public eye. 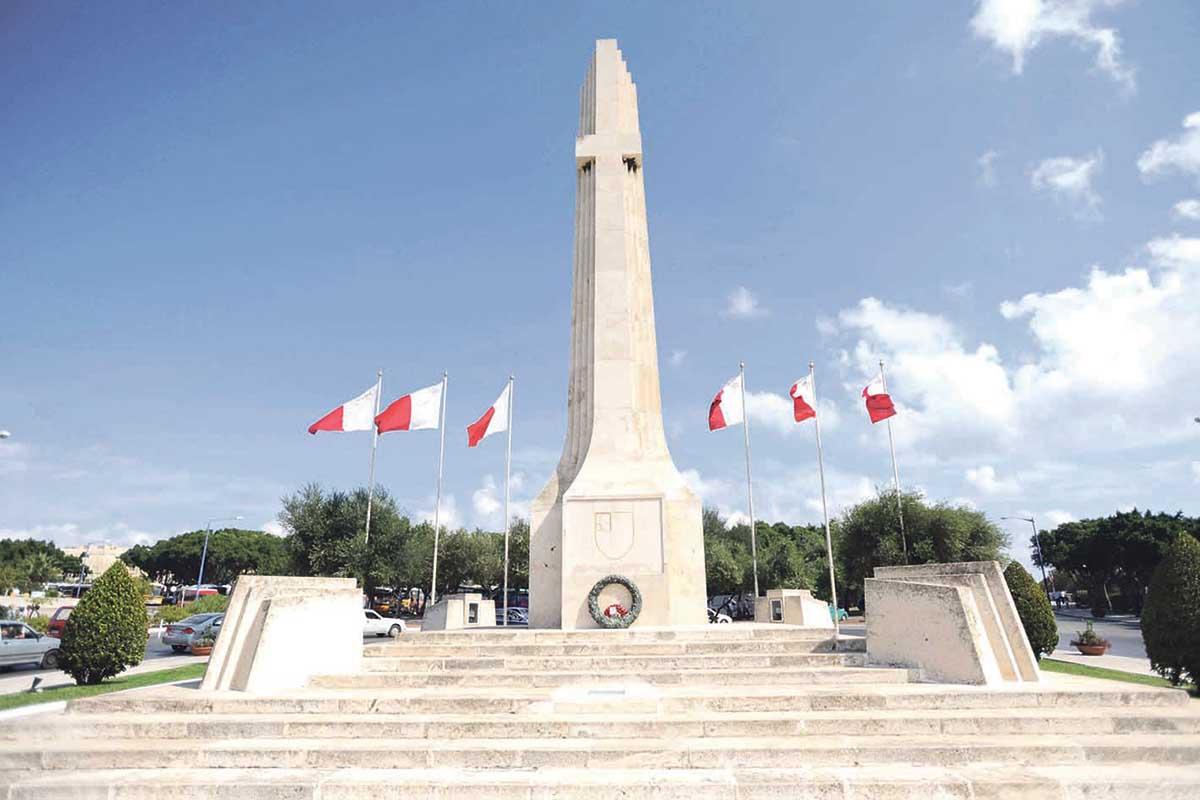 The Floriana War Memorial in 2008. After this picture was taken, several changes were made to its surroundings including the installation of an ‘eternal flame’. Photo: Rene Rossignaud

In November 1937, Naudi took up the post of restorer with the Fine Arts section of the Government’s Museums Department. The indispensable nature of his role allowed him to be exempt from military service upon Italy’s declaration of war in 1940.

Between June 1940 and July 1943, Malta was attacked by over 3,340 air raids. As part of the Museums Department team, Naudi found himself rushing headlong into smoking bombsites and dark, damp crypts to rescue damaged artefacts, carrying out ‘first aid’ restoration interventions on the spot.

During the war years, Naudi was responsible for the emergency rescue and transportation of artworks, which involved coordinating a team from the Department of Public Works. Several national treasures only exist today because of Naudi’s own bravery, together with that of his war-time colleagues.

Naudi is specifically credited with saving Mattia Preti’s largest painting, the famous Martyrdom of St Lawrence, which he somehow packaged and rushed to the Inquisitor’s Palace in Girgenti during one of the worst air raids to hit the islands. The church of St Lawrence, which housed the painting, was severely bombed in January 1941, when many civilians lost their lives.

Emergency restoration work was carried out on paintings at temporary workshops at the Roman Villa in Rabat and the National Museum at the Auberge d’ Italie in Valletta, while priceless artworks were stored in shelters, including Houlton’s rock shelter in South Street, Valletta, and the Inquisitor’s Palace at Girgenti.

Naudi frequently recalled cycling from Rabat to Valletta and back as anti-personnel bombs blew up in the fields nearby or the horror of seeing a German aircraft plunging into the Grand Harbour. The National Museum itself received a direct hit on April 7, 1942, and its staff were lucky to survive.

After the War, Naudi married Vida Grima in 1944 and the couple had two daughters. Naudi subsequently focused mainly on painting and restoration even after his retirement in 1967.

The Floriana War Memorial had an eventful history too and it only narrowly escaped destruction during the heavy bombardment of the harbour area.

After the war, the monument was officially declared to be a memorial to both the First and Second World Wars by the future Queen Elizabeth II herself on December 8, 1949, 70 years ago. Queen Elizabeth then revisited the obelisk in 1954 during her first Royal Tour since her coronation, after the War Memorial was relocated to its current position.

Today, the memorial is a scheduled Grade I National Monument and is a dramatic feature of our national landscape and a priceless part of our war-time cultural heritage. 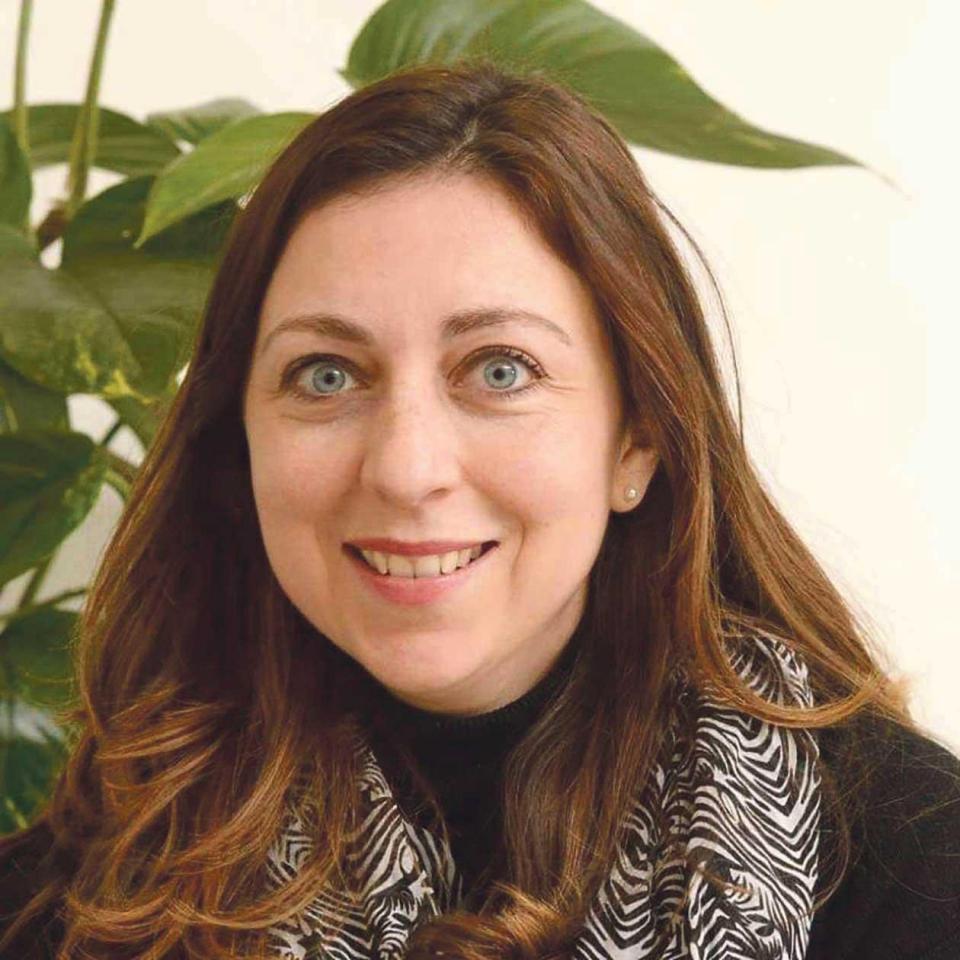 Acknowledgements
Background research for this article was contributed by Naudi’s daughter Ilona Borg-Carbott. Reference is also made to Anthony Spagnol’s The Conservation of the Artistic Patrimony in Malta During World War II, published by Heritage Malta, 2004.

Greta Xuereb is Louis Naudi’s granddaughter and a former journalist and book illustrator.