The residents of Tigné Point have kept up their battle to retain a view of the sea and fortifications from Pjazza Tigné, forcing the developers to go back to the drawing board.

Plans were filed two years ago by Mid Knight Holdings Ltd to develop new offices at the Tigné business centre, a large block overlooking the square.

The block is raised on pillars to create an open space under the lowest floor and allows free public access as well as an area for open-air restaurants and cafés.

The new application seeks to replace the open-air restaurants with more office space.

Residents maintain that the new design will create a landlocked piazza that would lose the only remaining view of the open sea and British-period fortifications, which they claim was promised by the developers.

They want the application revoked to avoid it becoming “an airless box surrounded by dense commercialisation”.

A decision meant to be taken in January was postponed pending a site inspection.

In the meantime, residents have kept up the opposition. They have been encouraged by a Planning Authority decision to reject plans for a restaurant structure above St George’s Bay promenade in St Julian’s that would have had an “unacceptable visual impact” on the sea view.

The residents’ concerns have been reiterated by Sliema mayor Anthony Chircop who told Times of Malta that the block was originally granted permission as it provided for an open sea view.

“We feel that since it was a condition when the block was originally built, it should remain as is,” he added.

The NGO Din l-Art Ħelwa is among those who objected to the change, saying the fortifications have already been “severely compromised” by the Tigné Point development. 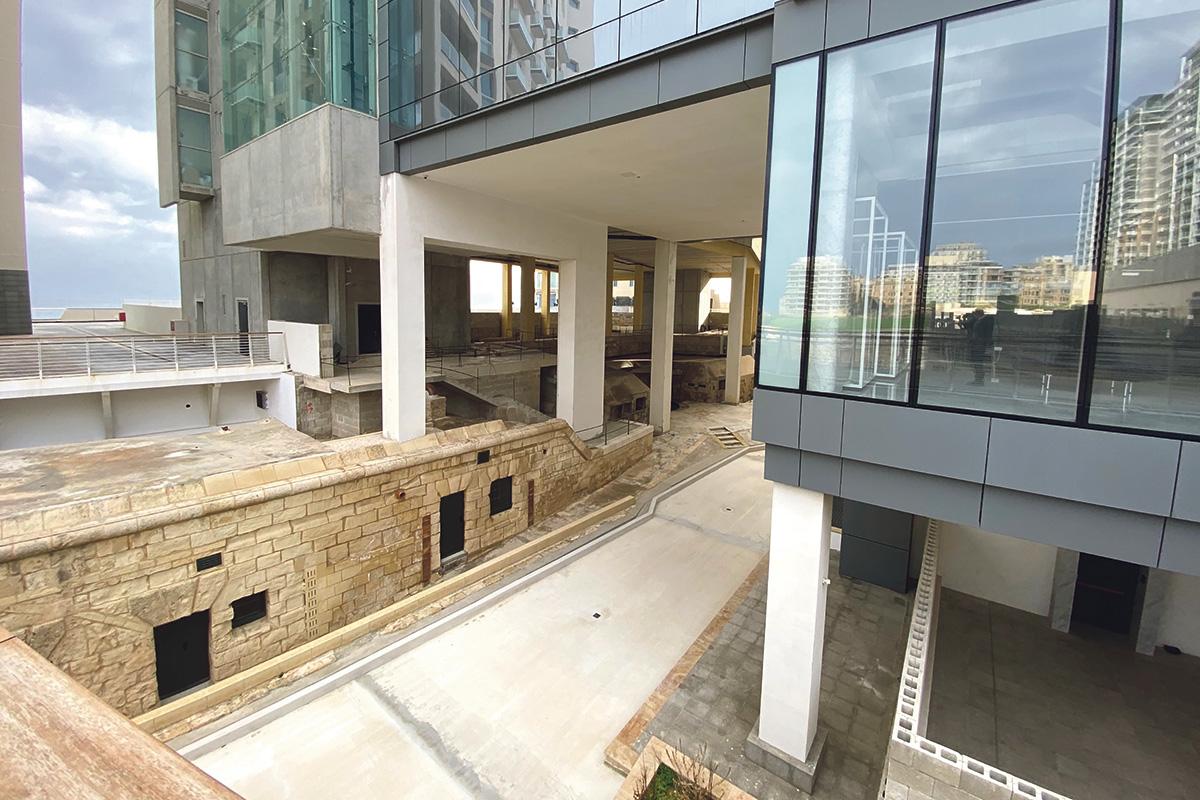 A photo under the office block provided by residents.

“It now adds insult to injury that this application calls for the complete obliteration of the view of these gun-posts and fortifications with this development.”

When contacted, the developers said they would be submitting new plans to “largely address” the residents’ concerns.

A spokesperson said that although designed to be a partly open space, the ground floor “was never intended to be operated as a public space”.

The permit provided for it to be operated as a food and beverage outlet with access restricted to patrons and would require an enclosure to be protected from the elements.

The developers refuted the claim that the development would landlock the piazza.

The square, they added, was always designed to be largely enclosed by the rest of the Tigné Point development. It enjoyed sea views and access from four different publicly accessible walkways.

The proposed development would not obstruct the public’s ability to appreciate the historic garden battery as this was visible from different points.

The company said it had recently held a meeting with the residents’ representatives and the locality’s local council.

“As a result of these discussions, the company is in the process of preparing an alternative design which will be shared with the residents and the local council prior to submitting to the Planning Authority.”

The alternative design “contemplates” creating an open space, on the piazza side, equivalent to around one third of the ground floor.

This would be designed as an extension to Pjazza Tigné and would benefit from sea views across the Garden Battery.

“The company believes that the alternative design largely addresses the residents’ concerns and the use of part of the ground floor as office space is far more desirable than a large food and beverage outlet about which some residents have expressed concerns.”