A 17th century painting depicting the coronation of Our Lady with St Joseph and St Catherine of Alexandria has undergone extensive restoration and will be unveiled this weekend at the parish church of the Assumption in Imqabba. 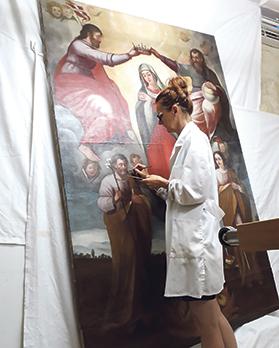 The restoration was in the hands of restorer and conservator Sabine Azzopardi.

According to historic documents, the painting was first mentioned in the description of the old parish church during the 1658 pastoral visit of Bishop Meguel Juan Balaguer de Camarassa.

In fact, the painting is older than the present church, which was completed in 1699.

Fr Jonathan Farrugia, who is overseeing the restoration of various paintings found in Imqabba, explained that the altarpiece adorned one of the side altars in the edifice which had served as the village’s parish church until the completion of the present church. It is the oldest painting in the church and it is also the only painting which moved from the old parish to the new one.

Fr Farrugia said that in 1953, there had been an attempt to have the painting changed with another one depicting St Joseph but the move was given the thumbs down by the Curia.

The restoration process, conducted by restorer and conservator Sabine Azzopardi, was a three-month project.

Soon after the painting was removed from its niche, it was noticed that the painting’s size had been altered and enlarged in height. This intervention, most probably, took place after the new church was built in order to fit the new altar-niche.

We can conclude that the addition was made towards 1698, about 40 years after the painting was finished

A 29-centimetre wooden board was added to the original painting to serve as a support for the extension. Souls in Purgatory had been added at the bottom to fill the extra piece, and the figures of St Joseph and St Catherine had been elongated too.

The painting’s style in the lower end differs very much from the original upper part, clearly indicating that it was done by another artist, Fr Farrugia said. 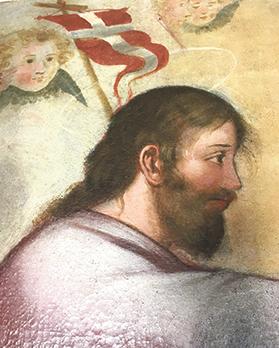 “We can conclude that the addition was made towards 1698, about 40 years after the painting was finished,” he said.

“Given the very close proximity of the original execution and the addition, it turned out to be quite a task to remove the overpainting done at this stage in order to adapt to the new size.”

Originally, the painting was made up of three canvases sewn together and eventually another piece was added at the bottom end.

Cleaning the layers of paint and removing overpainting from the lower end revealed the original feet of St Joseph and St Catherine. The height of the figures proves that the artist was aware of correct bodily dimensions but whoever added the extra piece ruined the proportion. 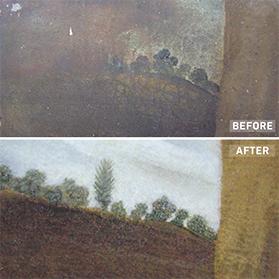 The aureole circling the saints’ heads were also revealed, together with a transparent veil around St Catherine’s head. The cleaning process from varnish and grime revealed great detail of the faces, including exquisite curly features in the hair.

The most interesting discovery was made in the top half of the painting where cleaning of what seemed like an explosion of light revealed the Holy Spirit depicted as a dove.

The newly-restored painting will be unveiled on Sunday at the Imqabba parish church at the end of the 6.30pm Mass.

The inauguration will include a presentation on the restoration process and a short talk by Fr Farrugia. 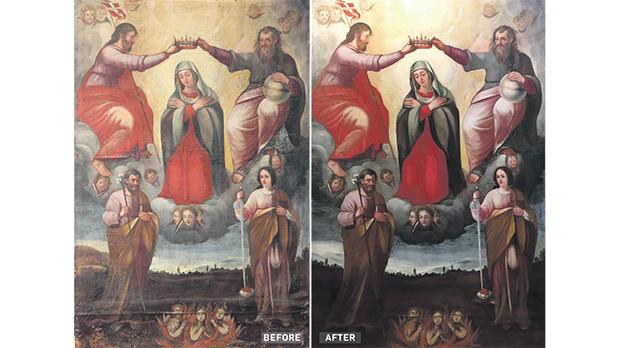 The newly-restored painting depicting the coronation of Our Lady with St Joseph and St Catherine of Alexandria will be unveiled at the Imqabba parish church on Sunday evening. 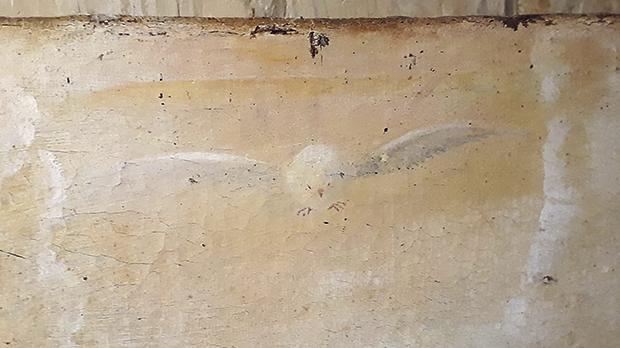