Threatening messages sent to Daphne Caruana Galizia’s mobile phone are to be identified by a retired judge and handed over to the court, a magistrate ordered on Friday. 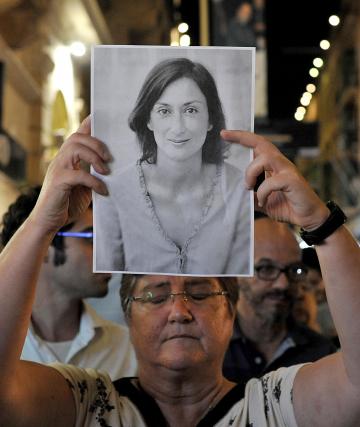 A woman holds up a portrait of Ms Caruana Galizia at a vigil marking one year since her assassination. Photo: Chris Sant Fournier

The decision was taken during a session in the compilation of evidence against brothers George and Alfred Degiorgio and Vincent Muscat, the three suspects currently accused of having murdered the journalist using a car bomb outside her Bidnija home on October 16, 2017.

Mr Justice Michael Mallia will analyse mobile phone messages sent on WhatsApp to Ms Caruana Galizia and identify any which amounted to threats. He will do this without disclosing the messages’ sources, the court, presided over by magistrate Claire Stafrace Zammit, said.

Both the defence and prosecution agreed to having the retired judge undertake this task.

Assessing Ms Caruana Galizia’s mobile phone was first raised by defence lawyers earlier on in proceedings, with the prosecution suggesting that an expert, ideally a retired member of the bench well-versed in criminal law, should be appointed to handle the task.

Earlier on in the sitting, IT court-appointed expert Keith Cutajar returned to the witness stand to explain that expert data recovery firms overseas had warned him that it was extremely difficult to restore a corrupted micro SD card.

Data from the physical phone has not been extracted and it will be messages from WhatsApp which may be downloaded.

Dr Cutajar had been tasked with contacting the firms to try and restore data from a Toshiba micro SD card in an earlier court sitting.

The particular micro SD card, which was made by Toshiba, was known to be problematic, he explained. The manufacturer had even halted production of that particular type of card and posted a warning on its website advising users to avoid using it to store data.

Extracting data from it would risk removing its outer coating and irreversibly damaging it, the expert explained, confirming, upon cross-examination by defence lawyer William Cuschieri that the original exhibit had never left his possession.

Dr Cutajar said he had only sent the foreign experts photos of the card taken using specialised equipment.

“They didn’t even know what the case was about,” Dr Cutajar told the court.

Another witness, Jason Pavia, representing Vodafone, was summoned again following the defence’s insistence on knowing how many phones had made contact with a particular cell tower at a particular time close to the incident.

“It’s not a simple question,” the defence argued, as Mr Pavia explained that all data had been retrieved from the system by their technical expert and handed over to investigators.

Prosecuting Inspector Kurt Zahra intervened, stating that it was the police’s task to actually check that data.