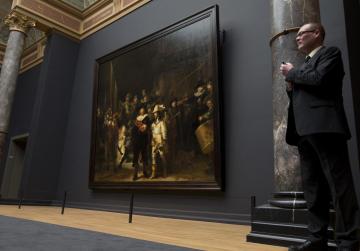 A senior security officer stands next to Rembrandt's The Night Watch painting during a press preview of the renovated Rijkmuseum in Amsterdam Photo:AP

Rembrandt’s masterpiece The Night Watch is back in pride of place at the newly renovated Rijksmuseum in Amsterdam as the gallery prepares to reopen after a massive 10-year, €375 million renovation.

The building also houses works by Johannes Vermeer, Jan Steen and thousands of other Dutch cultural and artistic artefacts.

In a preview today ahead of the National Museum of the Netherlands’ official reopening on April 13, director Wim Pijbes said the improvements will justify the long wait.

The 19th-century building’s red-brick exterior, which resembles a fairy-tale castle, has been left intact. Inside, a central courtyard has been crafted to let natural light pour in, creating a bright heart at the centre of the museum.

The museum expects annual visits to nearly double to two million after the renovation.