A Chinese negotiator involved in multi-million euro deals by Enemalta is behind a secret company suspected of being set up to pay kickbacks to Keith Schembri and Konrad Mizzi.

Year-long investigations by Times of Malta, Reuters and other journalism partners uncovered how Macbridge International Development is owned by Tang Zhaomin, the mother-in-law of Accenture negotiator Chen Cheng.

Macbridge was named in a 2015 email as one of two companies intended to pump money in to secret offshore Panama companies which Schembri and Mizzi took ownership of that year. The other source of funds was a company owned by murder suspect Yorgen Fenech, 17 Black. 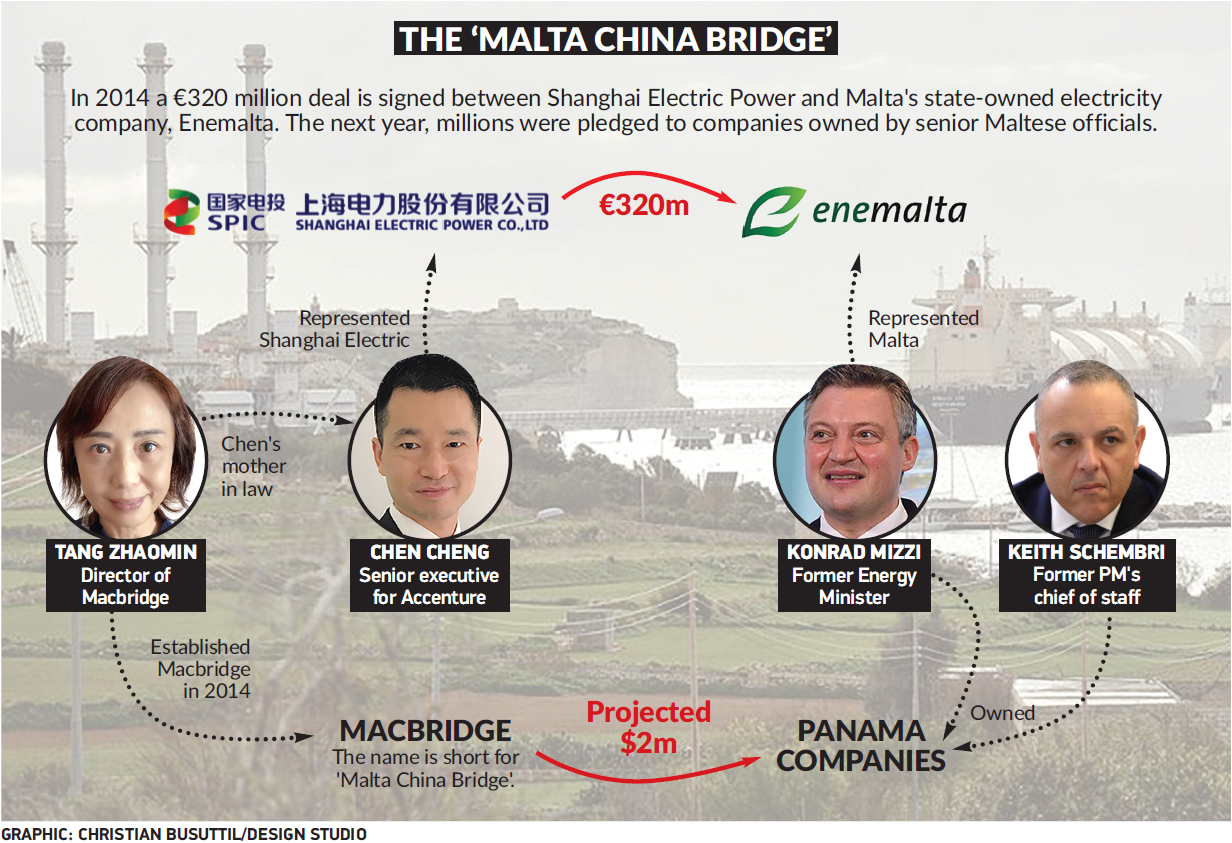 A consultant with Accenture, Chen played a key role in a €320 million deal for Chinese state-owned company Shanghai Electric Power to buy 33 per cent of Enemalta in 2014 and also pitched a Montenegro wind farm deal to the Maltese energy company, which earned Fenech millions of euro .

Chen and Shanghai Electric Power did not respond to a request for comment.

Investigations by Times of Malta, Reuters, OCCRP and Süddeutsche Zeitung also revealed the existence of another company set up in parallel to Macbridge, called Dow's Media. It received €1 million from Fenech’s 17 Black months after the wind farm deal went through.

Chen's link to Macbridge is another indication that Schembri and Mizzi sought financial gain from major government contracts which they oversaw as chief of staff at the Office of the Prime Minister and Energy Minister respectively. 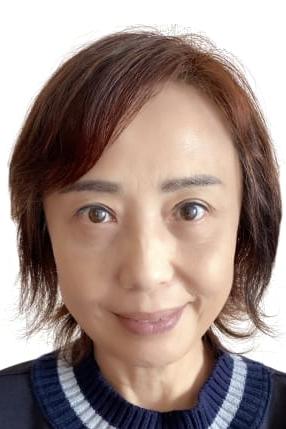 International legal requests seen by Times of Malta indicate that local authorities suspect that Macbridge and Dow's Media were part of an elaborate scheme, involving some participants in the China-Malta deals, to make payments to politicians in Malta and siphon off profits for themselves.

Ownership of Macbridge, whose Chinese name combines the characters for ‘Malta’ and ‘China’, was traced through the secretive jurisdiction of Seychelles to the Asian financial hub of Hong Kong.

Yorgen Fenech told investigators that ‘Macbridge’ stood for Malta – China bridge in his failed attempt to gain immunity from prosecution on charges of complicity in journalist Daphne Caruana Galizia’s murder.

Caruana Galizia first picked up on the money trail that would eventually lead to China in 2016 when, according to her family and records of her work seen by Times of Malta, she started to investigate two mystery businesses that she suspected were being used to pay bribes to politicians.

The journalist had few details of the two companies beyond their names, 17 Black Ltd and Macbridge Ltd, and a tip-off from an official source that they were part of a scheme to pay “kickbacks” to senior government officials.

Caruana Galizia texted her son Matthew in April 2016 that she had heard the two companies were “crucial to unravelling the web.” She was killed by a car bomb in October 2017 before she could fully untangle the complex network.

Watch: How the mystery of Macbridge was unravelled
]

Both Macbridge and 17 Black planned to pump millions into the offshore Panama structures set up by Schembri and Mizzi, according to an e-mail found in the Panama Papers cache.

The December 2015 e-mail detailing the planned money movements from Macbridge and 17 Black to Schembri and Mizzi’s Panama companies was authored by Karl Cini, a partner in the controversial auditing firm Nexia BT.

The process to open bank accounts in the Bahamas for the Panama companies was interrupted two months later, when Caruana Galizia started hinting she knew about the secret Panama companies.

Cini and other senior Nexia BT partners were detained in March on unrelated money-laundering charges together with Schembri. As of Monday, they were still in preventative custody.

When contacted by Times of Malta, Cini’s lawyer Stephen Tonna Lowell said his client would not be commenting about Macbridge.

Konrad Mizzi told Times of Malta when contacted that he had no information about Macbridge and had consistently rejected any link with his Panama company.

“I also reject the suggestion that I had business plans with Macbridge, or a personal interest in any public project.

“Furthermore, I am unaware of any person connected to the company you state to have identified. I know Chen Cheng as a consultant assisting Shanghai Electric Power in multiple initiatives, and my interactions with him were in that official context,” Mizzi said. 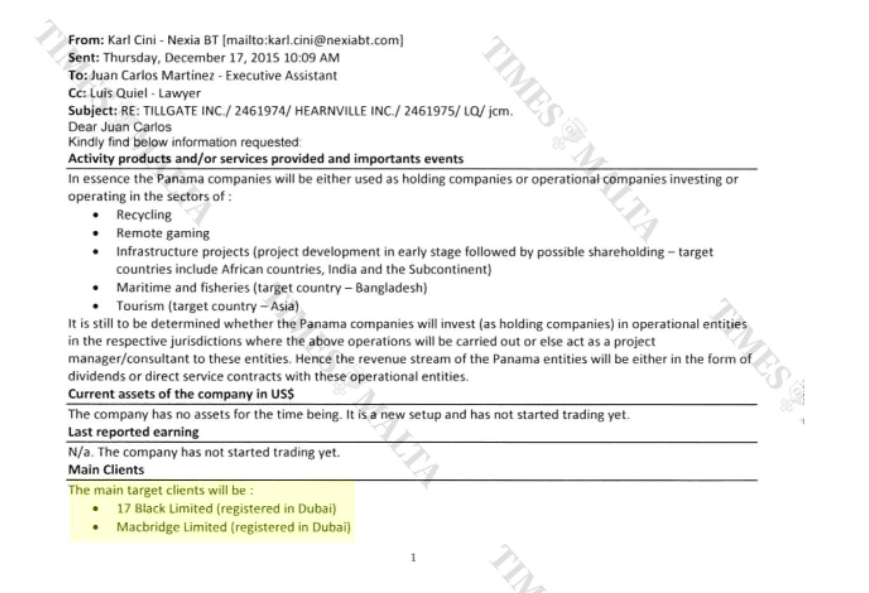 This e-mail by Karl Cini detailed plans for 17 Black and Macbridge to pump funds into Mizzi's and Schembri's offshore structures.

Schembri did not respond to a request for comment sent via his lawyer by the time of publication.

Chen's employer Accenture said in a statement that it was “carefully reviewing these allegations as they relate to one of our people.

"We adhere to the highest ethical standards in every market in which we operate and have zero tolerance for any deviation from those standards.”

When the Panama scandal broke in 2016, Schembri and Mizzi claimed the shell companies were set up by Nexia BT to manage their personal assets and were totally unrelated to their public functions.

Schembri has since acknowledged having “draft business plans” with 17 Black, but denies any knowledge about Macbridge.

He told the public inquiry into Caruana Galizia’s murder last December that Nexia BT had mentioned the company in the December 2015 e-mail “by mistake”.

It was initially believed that Macbridge, like 17 Black, was registered in the United Arab Emirates, though no trace of a company fitting that profile was ever found there.

Times of Malta and Reuters then followed the trail to Hong Kong following Fenech’s arrest and the Malta-China bridge claims.

Corporate filings and financial documents reviewed by Times of Malta and its reporting partners revealed that Macbridge is owned by Chen’s mother-in-law, via a shell company in the Seychelles.

The Seychelles company was registered by Mossack Fonseca, the Panamanian law firm at the heart of the Panama Papers leak. Ownership details linking the company to Tang Zhaomin were traced within the leak by Times of Malta and its reporting partners.

Corporate filings in Hong Kong revealed the existence of another company, Dow’s Media, that was registered almost in parallel with Macbridge.

A summary of 17 Black’s transactions reviewed by Times of Malta shows Dow’s Media received €1 million from 17 Black in 2016. 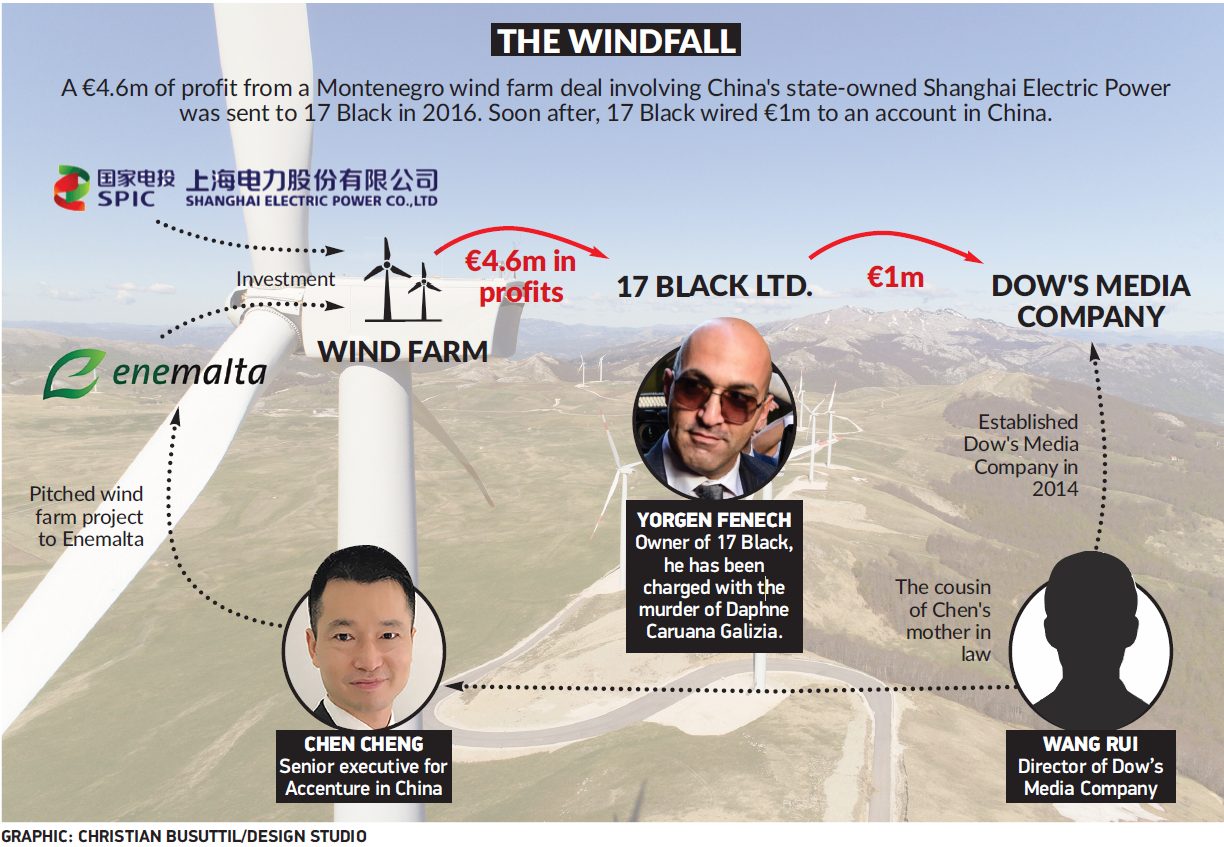 When questioned by reporters about her role in Dow’s Media, Wang claimed it was Chen who asked her to front the company on his behalf.

“He asked me to set up the company and I thought there wasn’t any problem in doing so,” Wang said of Chen. “He told me that it would do media-type work,” she told Reuters in Shanghai.

She added that Chen at the time had told her he could not set the company up himself because of his connection to a state-owned enterprise. Wang didn’t name that company or otherwise elaborate.

She also confirmed the family relationship between Tang and Chen.

Both companies were dissolved within a week of each other in January 2019, two months after Fenech was outed by Times of Malta and Reuters as 17 Black’s owner.

Macbridge and Dow’s Media were set up in ways that make it very difficult to determine who actually owns them. They were controlled through shell companies in the Seychelles and the Marshall Islands, respectively.

The €1 million transfer to Macbridge’s sister company Dow’s Media, was sent by 17 Black in three tranches between May and July 2016.

These payments came after 17 Black secretly received a €4.6 million profit in May 2016 off the Montenegro wind farm deal that Chen helped negotiate with Enemalta.

It was Chen who had introduced an intermediary company called Cifidex, owned by Fenech’s fellow Electrogas director at the time, Turab Musayev, into the deal with Enemalta. 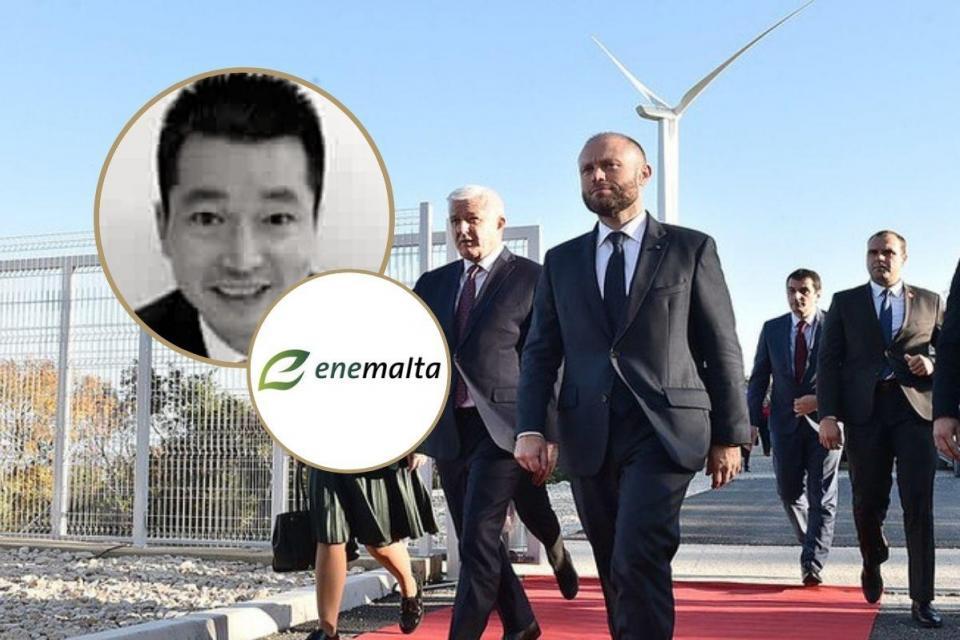 Cifidex bought the shares in the Montenegro project from the Spanish consortium Fersa for €2.9 million in December 2015, selling them to Enemalta two weeks later for triple the price.

Chen first pitched the deal to Enemalta’s board in December 2014 and nudged the state-owned company towards opening negotiations with Cifidex, instead of Fersa.

According to Enemalta board minutes, Chen had described Cifidex in a presentation to the board as the “sole agent” for the Montenegro project.

Enemalta’s board gave its approval for negotiations to begin with Cifidex a month later, with Kevin Chircop, who now chairs Enemalta, describing Cifidex as the actual owners of the project, according to board minutes of the January 2015 meeting.

Cifidex would only take over full ownership of the project shares in December 2015, weeks before it resold them to Enemalta.

An internal Enemalta audit into the deal found due diligence omissions and a lack of professional scepticism by Enemalta’s board about the Montenegro deal.

According to the report, Accenture and Shanghai Electric Power took the lead in the due diligence checks throughout the deal.

The audit, which has not been published, discovered how Accenture, represented by Chen, had contacted Nexia BT to carry out a report on the Montenegro acquisition.

Accenture’s request highlighted that a report was needed with a conclusion clearly pointing out how much the project was worth, given the market conditions provided, the internal report says.

The internal investigation was unable to get its hands on the ultimate report by Nexia BT.

Enemalta passed on the report to the police, who are investigating the deal.
A spokesperson for Enemalta declined to give details about Chen’s precise role in the Montenegro and Shanghai Electric Power deals.

Chen had used Nexia BT to set up a company in the British Virgin Islands and a Pilatus Bank account with expected cash flows of €1 million in 2015. No cash was ever paid into the account. 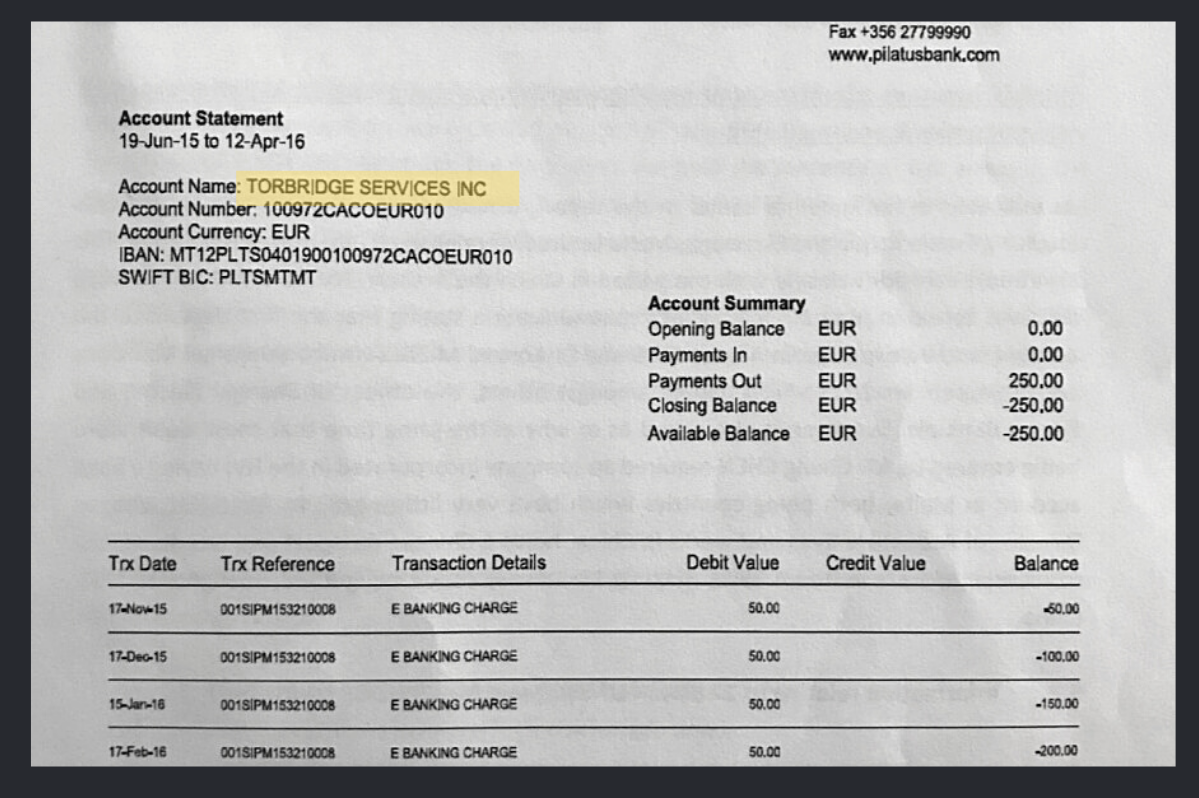 An investigation by the FIAU found that Nexia BT opened up an account at Pilatus Bank for Chen Cheng's company Torbridge Services.

Chen first appeared on the local scene in 2013, laying the groundwork for Chinese state-owned energy company Shanghai Electric Power to buy a 33 per cent stake in Enemalta.

The formal origins of the Shanghai Electric Power deal can likely be traced back to an agreement signed by former Prime Minister Joseph Muscat and Chinese Prime Minister Li Keqiang in September 2013. 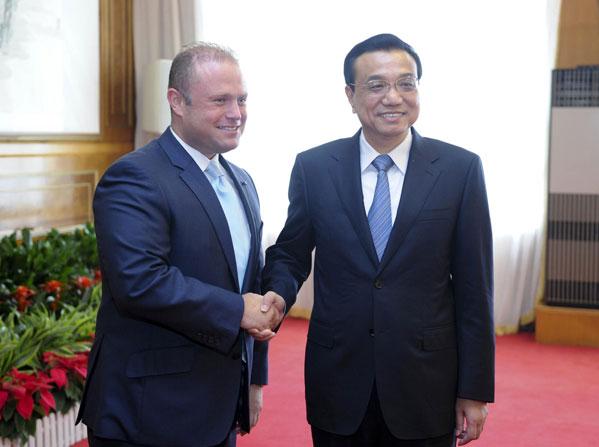 Chen said during a 2018 interview that the Chinese premier had personally spoken to Muscat about the project.

Muscat had met Keqiang in China, during which a “medium-term cooperation plan” was drawn up between the two parties.

A memorandum of understanding was signed a year later, detailing planned cooperation on energy, infrastructure and civil aviation projects, among others.