A project to build 165 flats in Qala, which is one of the largest residential developments Gozo has ever seen, is being put together in stages through applications filed by different individuals who are, however, all connected to property supremo Joseph Portelli.

Four planning applications for adjacent blocks of apartments have been filed over the last two years but all evidence gathered by Times of Malta points to a single project being carried out by J Portelli Projects, owned by Mr Portelli.

The piecemeal approach means there is greater chance of approval from the Planning Authority than if the massive development – which sprawls over an area larger than three football grounds – were to be applied for as a single project. Three of the applications have been given planning permission, with excavation work underway on the sites, and another is being processed.

Times of Malta has also discovered false declarations made in two of the applications in relation to ownership of the land in question.

Evidence that it is all one project comes from analysis of Facebook promotion by J Portelli Projects.

A “customer representative” of J Portelli Projects also recently pitched the latest batch of flats to be put on the market as belonging to the “same developers” behind a block of flats in Żebbuġ developed by Mr Portelli several years ago.

And in WhatsApp communications, a sales agent, who on Facebook says he works at J Portelli Projects, sent this newspaper information sheets of architectural drawings of the different blocks, including the latest development application to be filed.

Yet, in all four development applications, the applicants replied in the negative to the question of whether the applicant was – or represented – a company.

And in two of the applications, the applicants declared they were the “sole owner of the entire site indicated on the site plan” – the Times’ investigation clearly shows that this is not the case. 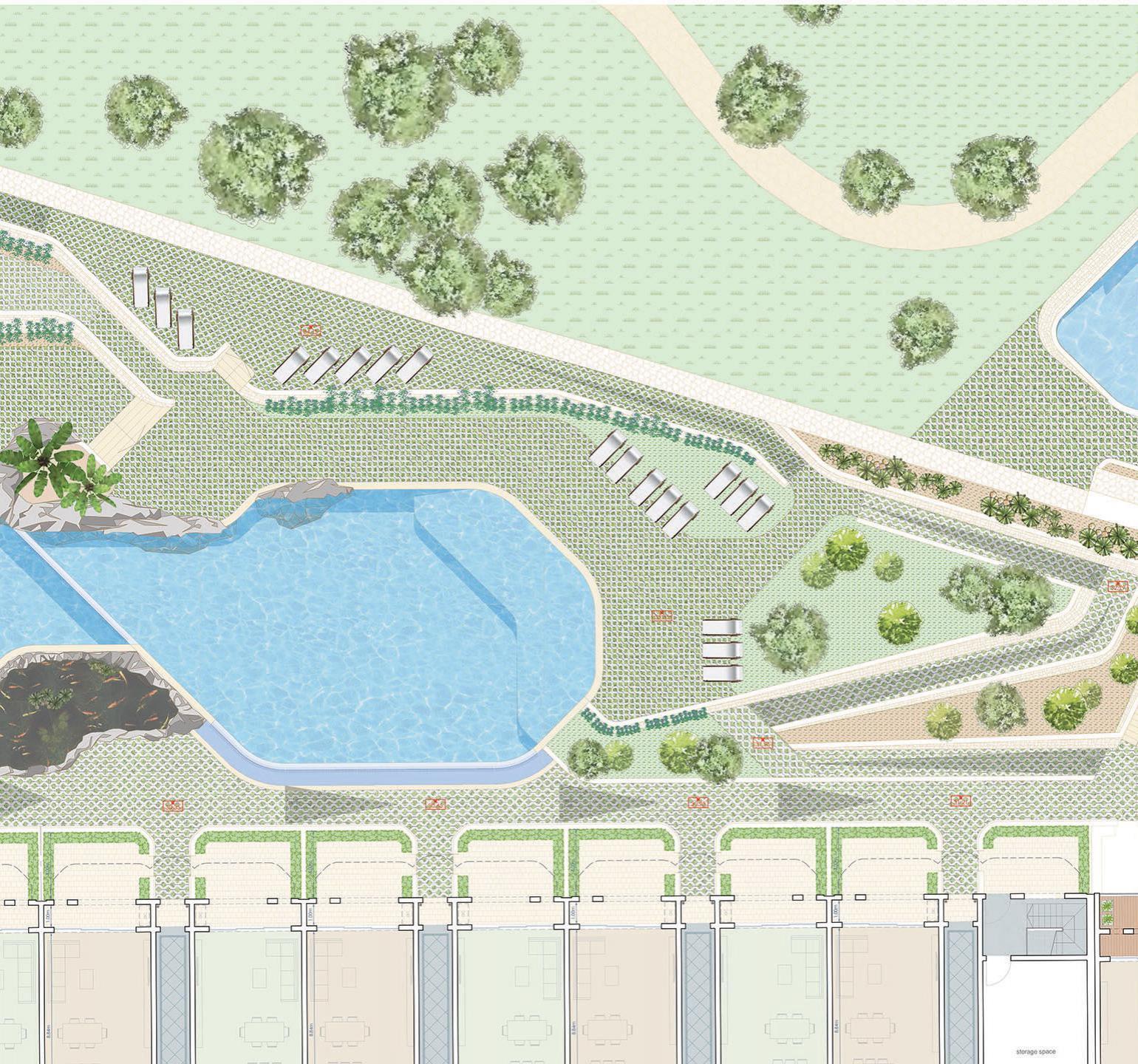 One of the designs used to market the apartments, showing amenities in an ODZ area for which there is not yet a planning application.

A false declaration of ownership in an application for the Planning Authority is a criminal offence punishable by up to two years imprisonment. It is also an offence under the Development Planning Act, which could potentially lead to revocation of a permit.

Another application was filed by Daniel Refalo, owner of DTX Holdings, a partner to J Portelli Projects.

A false declaration of ownership is a criminal offence

Yet another partner who applied for the third block is Mark Agius, better known by his family nickname Ta’ Dirjanu.

And the latest application, for a block of 64 flats, was fronted by Eric Saliba – an Eric Saliba is listed as an administrator on the website of J Portelli Projects.

This latest application was filed last September 24 and public representations are still open – the Qala local council last month objected to the development.

Permits for the first three blocks have already been granted, despite all being re-commended for refusal in technical PA reports, and excavations have been carried out. Times of Malta reported on the developments last October 30 after a slice of adjoining government land, leased to farmers, was illegally excavated.

Meanwhile, sales of the flats off-plan have gathered pace.

In the WhatsApp communications, the sales agent sent this newspaper data sheets listing more than 100 flats and their availability, and many of the flats were flagged as sold.

All of this is designated on what is currently agricultural fields outside development boundaries. No planning applications for these facilities on the ODZ appear on the Planning Authority servers where other applications can be accessed.

Joseph Portelli was sent questions and approached for comment. In a phone call on Saturday, Chloe Portelli suggested a meeting “at the end of next week,” saying she could not respond immediately to the questions emailed last Friday. 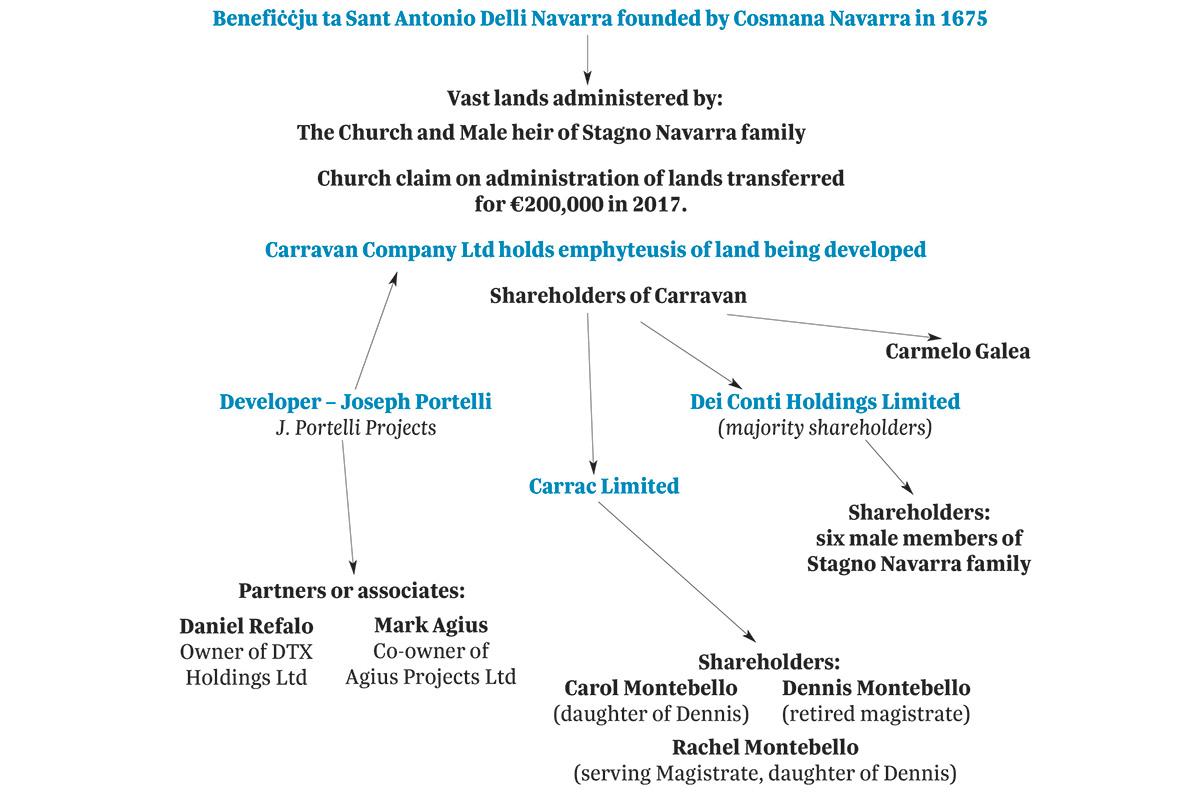 Who owns the land?

The land on which the developments are being put together like a jigsaw is held under emphyteusis or perpetual lease by a company called Carravan Company Limited.

The directors of Carravan are Gozitan lawyer Carmelo Galea, retired magistrate Dennis Montebello and two other individuals of the Stagno Navarra family.

In turn, Carrac belongs to Dr Montebello and his daughters Carol and Rachel who hold equal shares. The latter is a serving magistrate appointed to the bench in 2018.

Dei Conti Holdings belongs to the Stagno Navarras who are the heirs of the 17th century noblewoman Cosmana Navarra.

In 1675, Cosmana Navarra placed a vast amount of land, including the land in question, in a foundation to be administered by the male heir of the Stagno Navarra family and a ‘rector’ appointed by the archbishop.

After a lengthy court battle, the church reportedly relinquished its administrative claim on the land in 2017 against a payment of €200,000.

In the middle of last year, the foundation of Sant Antonio Delli Navarra leased the land where the development is taking place to Carravan Company Limited for the payment of €43,000 annually. The piece of land is called Ta’ Għar Boffa and measures 23,167 square metres, or more than three football pitches.

It is not known what arrangements exist between Carravan, which now holds the lease, and the project developer.

Yet, two of the applicants for the flats, Chloe Portelli and Daniel Refalo, declared on the application that they are “sole owner of the entire site indicated on the site plan”.

Senior judiciary sources said such false declarations of ownership constitute a criminal offence in terms of Article 188 of the Criminal Code.

The article specifies that anyone who makes “any false declaration or gives false information” to a public authority “to gain advantage or benefit” is liable to a fine or imprisonment not exceeding two years.

This point was also made last month in an appeal filed by NGOs against the approval of an application for a controversial pool villa elsewhere in Qala, which is owned by Mr Portelli and two of his associates.

The appeal argues that following the granting of the permit, Mr Portelli had come forward to say he would not develop the land – which is evidence that Mr Agius is not the sole owner, the NGOs argued.

Aside from possible prosecution in the criminal court, a legal expert said that making false declaration can also be grounds for revocation of a development permit under planning laws.

The Development Planning Act makes it an offence for someone to make any declaration “which is false, misleading or incorrect in any material respect”.