Mizzi Studio, the firm behind the Malta Bus Reborn project where the traditional Maltese bus was reimagined into an electric bus fleet, again drew influence from Maltese heritage with its first commercial project in Malta.

The new eatery, located in Dingli, was designed to celebrate the joy and tradition of eating and drinking, taking cues from the traditional elements of the village itself, including the typical Maltese faċċata (facade), its coloured timber doors, the glass antiporta, informal parapet steps and the mid-century terrazzo tile.

“Dingli represents the modest and slow-paced way of life that is so typical of Malta,” Jonathan Mizzi, director at Mizzi Studio, said.

“Working within the village’s particular urban fabric was a key inspiration for us. We are very passionate about revitalising our local heritage in a way that works harmoniously with the functionality of the project. With the Malta Bus project, we reimagined a traditional Maltese bus design that was based on the unique characteristics of the iconic bus fleet. Similarly, here we created a statement corner landmark that respects its surroundings and pays tribute to Dingli’s village identity.”

Dingli remains one of Malta’s most beloved belvedere destinations, with uninterrupted sea views over the Mediterranean Sea and the islet of Filfla.

The team, led by Mizzi, was keen to create a new destination for the village; a recreational landmark that would celebrate its environment while injecting it with new life. 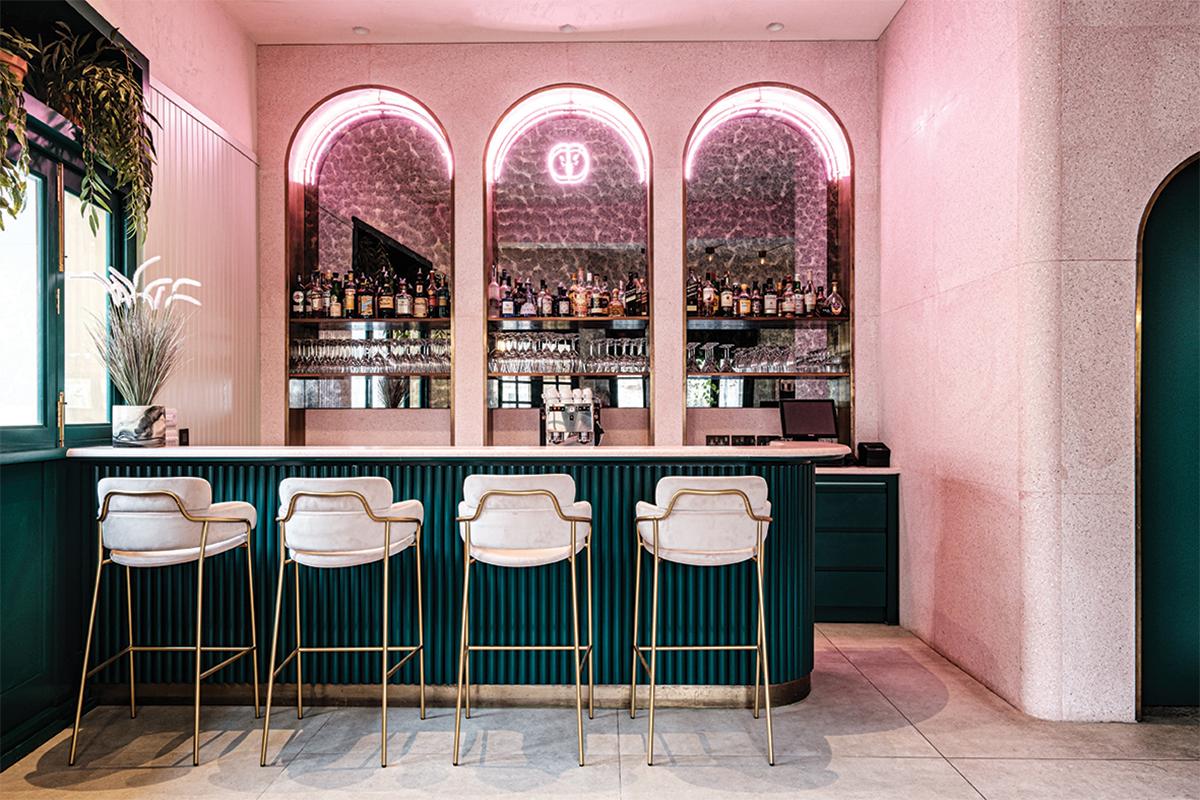 The bar is a focal point for the entire interior space, inspired by the elegance of European art deco bistros.

The team was also inspired by the everyday functionality of the faċċata, introducing an in-built, exterior bench along one of the loggia-style apertures, building on the long-standing village traditional of porch-gathering and allowing customers to enjoy a fleeting refreshment outside the eatery. 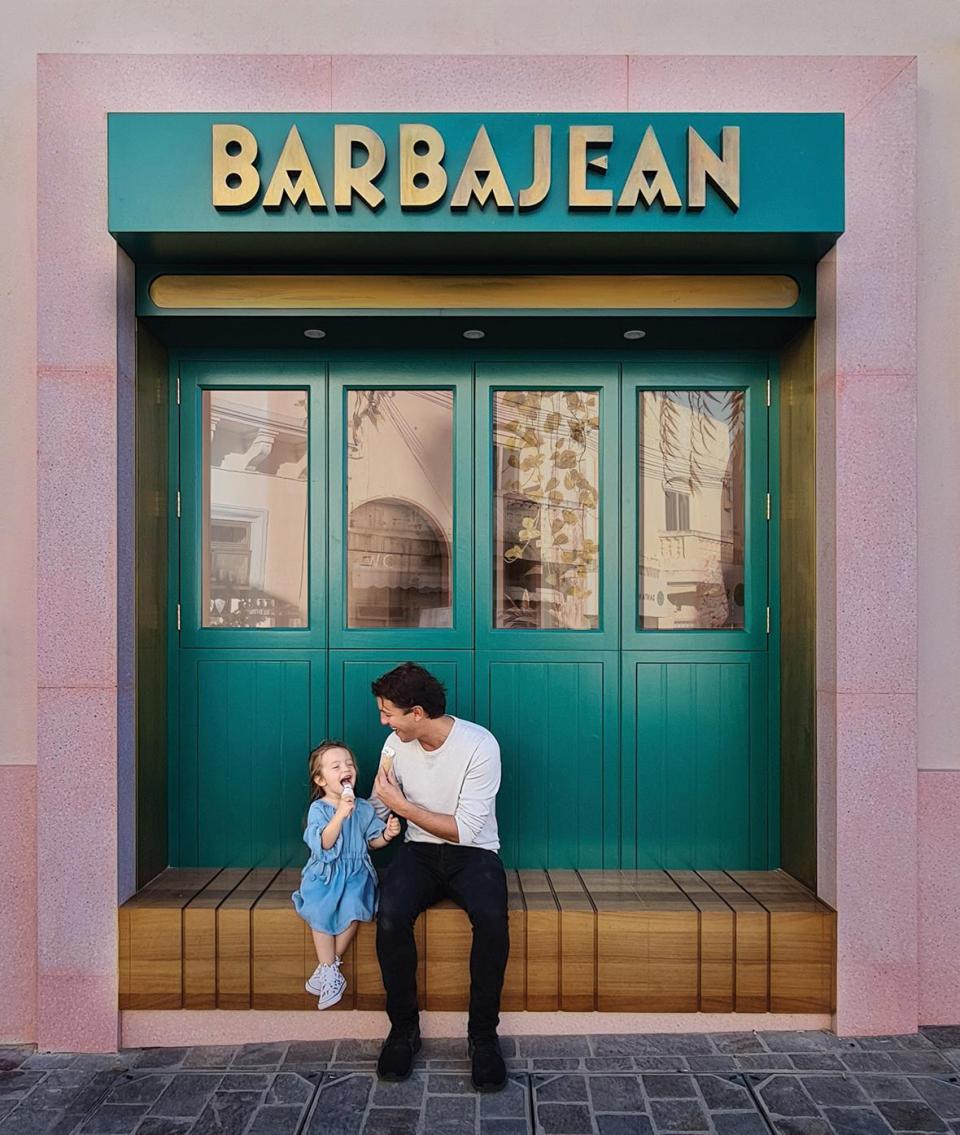 Designer Jonathan Mizzi enjoying an ice cream with his daughter outside the eatery.

The restaurant’s bar space recalls the elegance of European art-deco bistros. Three slender, tall repeating arches are lit with striking neon accents and calligraphy and rendered in a speckled, pale pink terrazzo. The arches complement the emerald green of the timber fluted bar body and work in parallel with its custom-made terrazzo countertop. Bespoke brass tubular barstools line up along the length of the bar, with velvet upholstery that complements the green timber fluting.

A long seating bench lines the back of the restaurant’s entrance façade, sitting beneath its large window. The long bench is upholstered in a robust green that recalls the Parisian tubing of architect Hector Guimard’s art nouveau metro entrances. The bench is partnered with a series of custom-designed and built tables, each having a pink terrazzo top flecked with shards of Guatemala Verde.

Aside from the restaurant’s furniture, the team designed a series of bespoke light fixtures that illuminate, partition and decorate the entire interior space. Along the restaurant’s seating wall, double-bowed brass tubes form the bodies of another series of statement lamps, each implicitly dividing the common seating bench, creating rhythmic visual partitions via their arched rods and spherical lampshades. 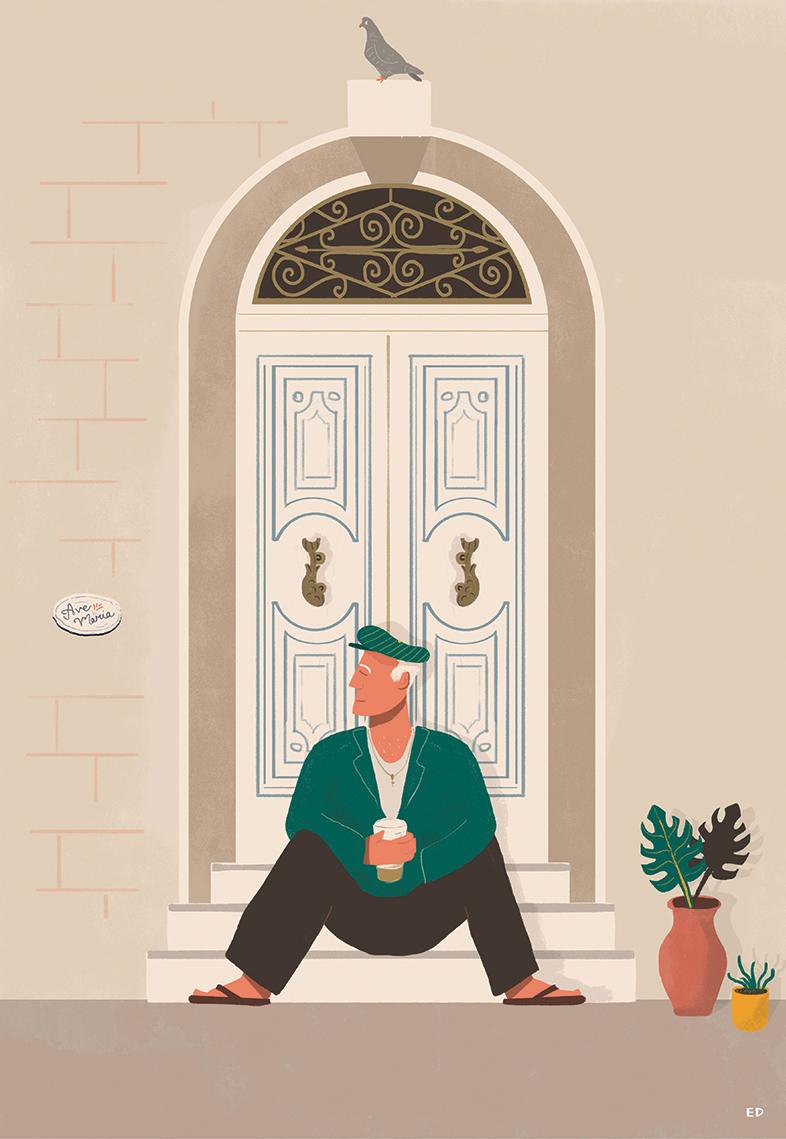 One of Ed Dingli’s original artworks adorning the space.

The team also approached local illustrator and designer Ed Dingli to create original artwork that would hang as an exclusive series within the restaurant’s interiors, capturing the cultural spirit of Dingli’s typical village life.

Mizzi Studio’s signature holistic design approach worked effectively to create a cohesive and impactful architectural identity for the new Barbajean eatery. From the facade and lighting fixtures to signage and furniture, all elements were custom-designed and built specifically for the project.

“As a studio, we are deeply influenced by nature and how architecture can live in harmony with natural surroundings,” Mizzi said.

“We envisioned Barbajean as a pitstop or end destination that might weave into long walks within the region’s beautiful landscape.

“We wanted to create a restaurant that would stand at the core of a quintessential Maltese village experience, one that would give people an opportunity to stop and reflect on the beauty of the natural surroundings and nearby cliffs. This project gave us an opportunity to create a new and distinctive design language. We wanted to create something that wholly represented this particular place and its identity – its site, its management and its overall spirit.”

Chef and owner Jean Pierre Dingli added: “Jonathan and his team understood the spirit of Barbajean from our earliest discussions. His team’s attention to detail, love of materials and deep interest in craftsmanship matched our own distinct vision for a versatile eatery that would celebrate the beloved rituals of dining out.

“We wanted to create a food destination that provided an elevated experience to diners – a place that would combine the pride of heritage with the excitement of contemporary design. Mizzi Studio completely met that brief.”