An internal police investigation is being conducted following serious claims of police brutality in Żebbuġ on Saturday, Times of Malta is informed.

The claims are accompanied by the above video footage, in which some eight officers from the Rapid Intervention Unit – the mobile police – are seen manhandling and violently pushing two men, an Italian businessman named Fabrizio Sciré and his son, with two particular officers clearly seen punching and striking blows at the two men without the latter offering any resistance. 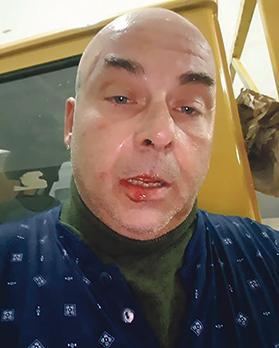 So far, the police officers involved have not yet been suspended from their duties, as usually happens, despite the fact that video footage has been passed on to the police and other authorities.

The Italian embassy was also informed about the incident and is investigating.

A police spokesman on Tuesday confirmed that “the police have received these reports and are investigating what had actually happened to establish the facts”.

However, the spokesman emphasised that “the police officers involved are denying that they beat up the Italian men”, despite the footage suggesting otherwise.

The Sicilian businessman, Fabrizio Sciré, set up shop in Malta’s construction industry together with his family three years ago. He recounted to Times of Malta that last Saturday night, while at home, a neighbour of his stores in Żebbuġ informed him that one of his construction trucks, parked outside his stores, was on fire.

“Despite the fact that I had just returned home from undergoing a medical procedure in hospital, I rushed off to the site in my pyjamas, together with my two sons, to find one of my trucks engulfed in flames.”

“I was desperate and in tears. I asked the police officers, already on site to help me move my other vehicles, which were also in danger of catching fire,” he said.

According to Mr Sciré, for some unknown reason, some of the police officers surrounded him and instead of helping him started pushing him and calling him names.

'They punched me on the head'

“At that point, one of the officers starting pushing me to the wall and punching me violently on the head while other officers joined in and kicked me in other parts of my body. Another police officer hit me on the head with his radio,” Mr Sciré said.

He added that, his eldest son, who was present while the police were beating him, intervened to try to diffuse the situation. 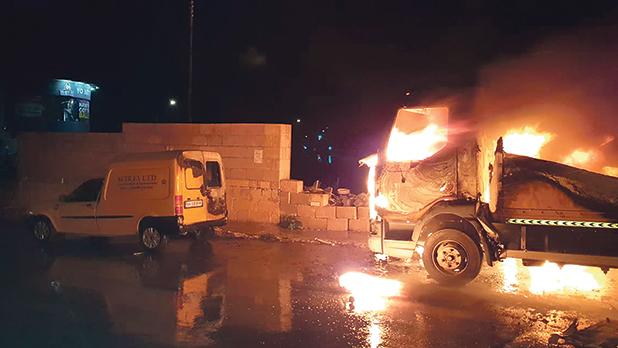 One of Fabrizio Sciré’s trucks on fire outside his stores last Saturday before the alleged beating took place.

“However, one of the officers also started pushing him, held him savagely from his neck and started punching him as well.”

Mr Sciré claimed that even his eight-year-old son was manhandled by the police. However, unlike that aggression on the two men, the video footage does not show any such actions.

Times of Malta is informed that an official report alluding to the police brutality was immediately filed, accompanied by medical certificates detailing the blows Mr Sciré and his son allegedly received by police officers.

Although claims of police beatings in Malta are rare, they are not normally accompanied by video footage.

A similar case hit the headlines in 2007, when a police sergeant was caught on camera kneeing a 56-year-old woman in the chest but the officer was immediately relieved from his official duties by then Police Commissioner John Rizzo.

The officer involved was then arraigned in court and charged.