If there’s one thing that’s becoming more and more clear to me, it’s that people – on the whole – could not care less about cars. I mean, we all appreciate them for existing, but that’s also how we feel about washing machines – and I don’t see people queuing up to join the Zanussi JetSystem Owners’ Club.

Which is why it’s refreshing when a car comes along that almost everyone – for better or worse – takes notice of. What’s even more surprising is that it’s taken the form of a small, five-door Honda. 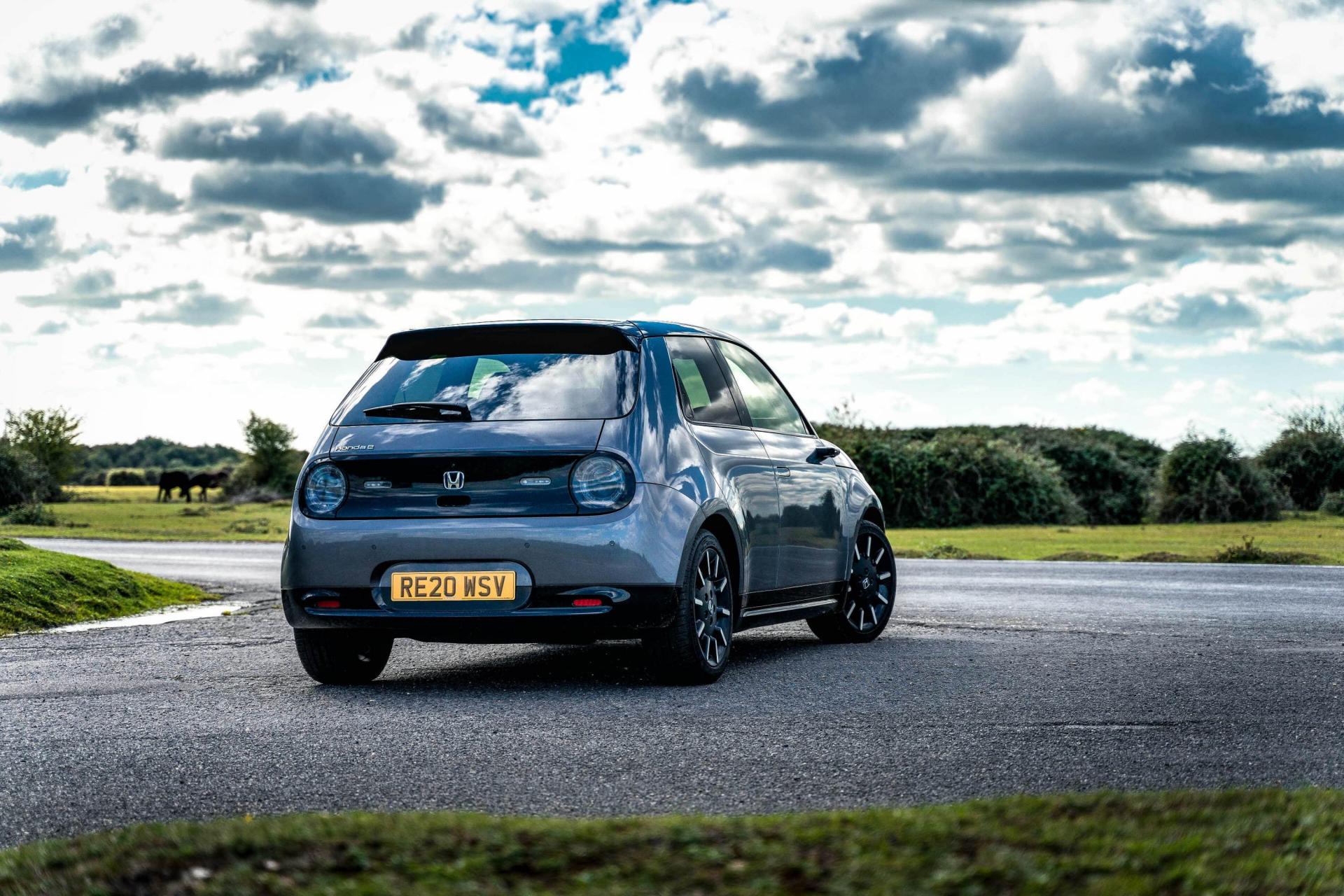 The e first appeared as the ‘Urban EV’ concept car, which proved such a hit at Frankfurt’s 2017 Motor Show (remember those?) that Honda’s bosses decided to put it into production.

A few of the concept’s details were lost along the way, but it’s what remains that matters – the svelte, simplistic shape and circular headlights that evoke the Civic of the 1970s; the clean lines and recessed, aerodynamic door handles; the contrasting charging flap placed proudly in the centre of the bonnet. 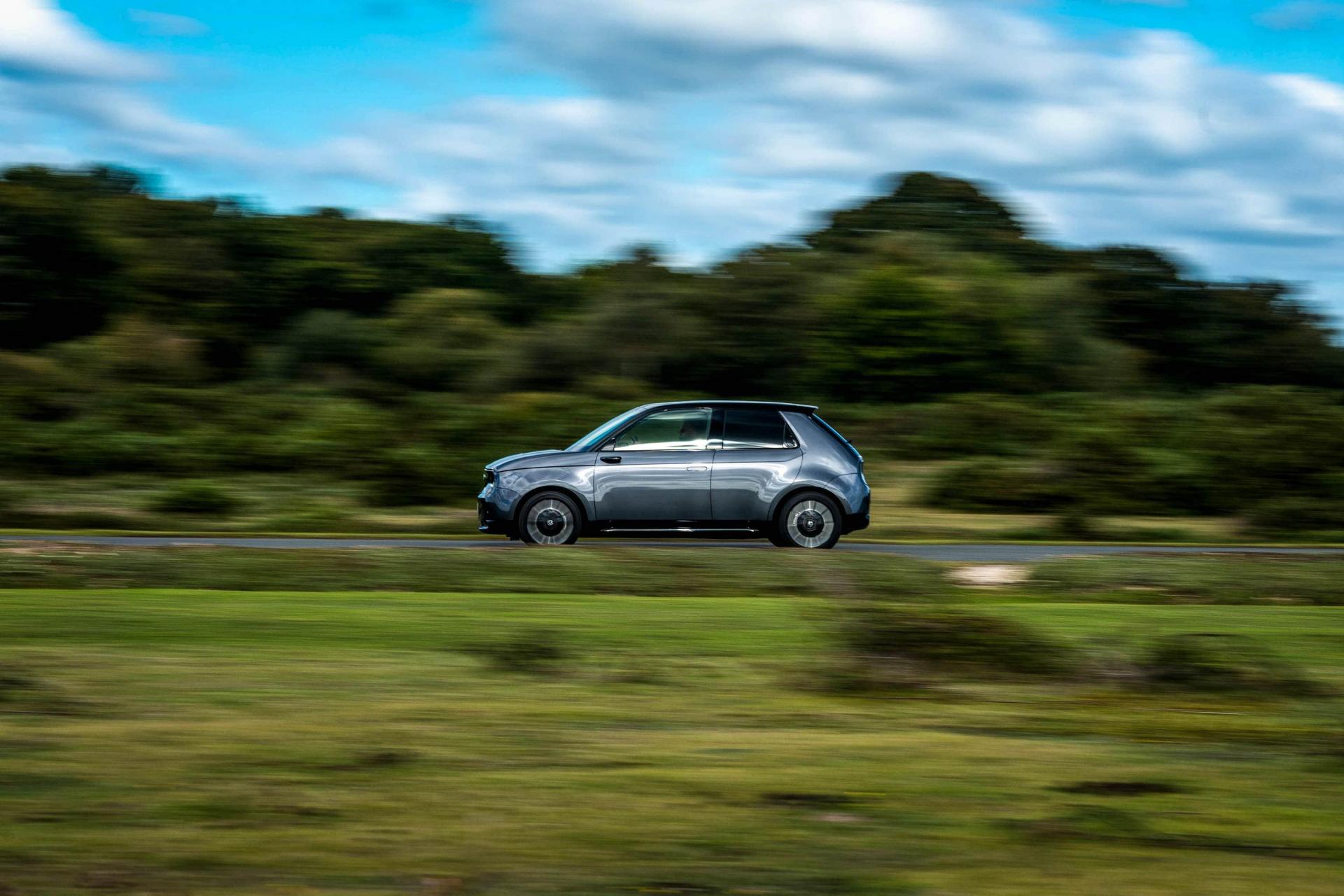 Compare the e with something like a Tesla Model 3 – a current internet favourite – and Mr Musk’s creation comes off as an anonymous, amorphous, Florida rental car.

Inside, things are even more surprising. A full-width wooden(ish) dash is laid out in front of you like a ’70s G Plan sideboard. Upon it sits a wall of screens – two for infotainment, two that act as wing mirrors via the external cameras, and one as a speedometer in front of the driver. 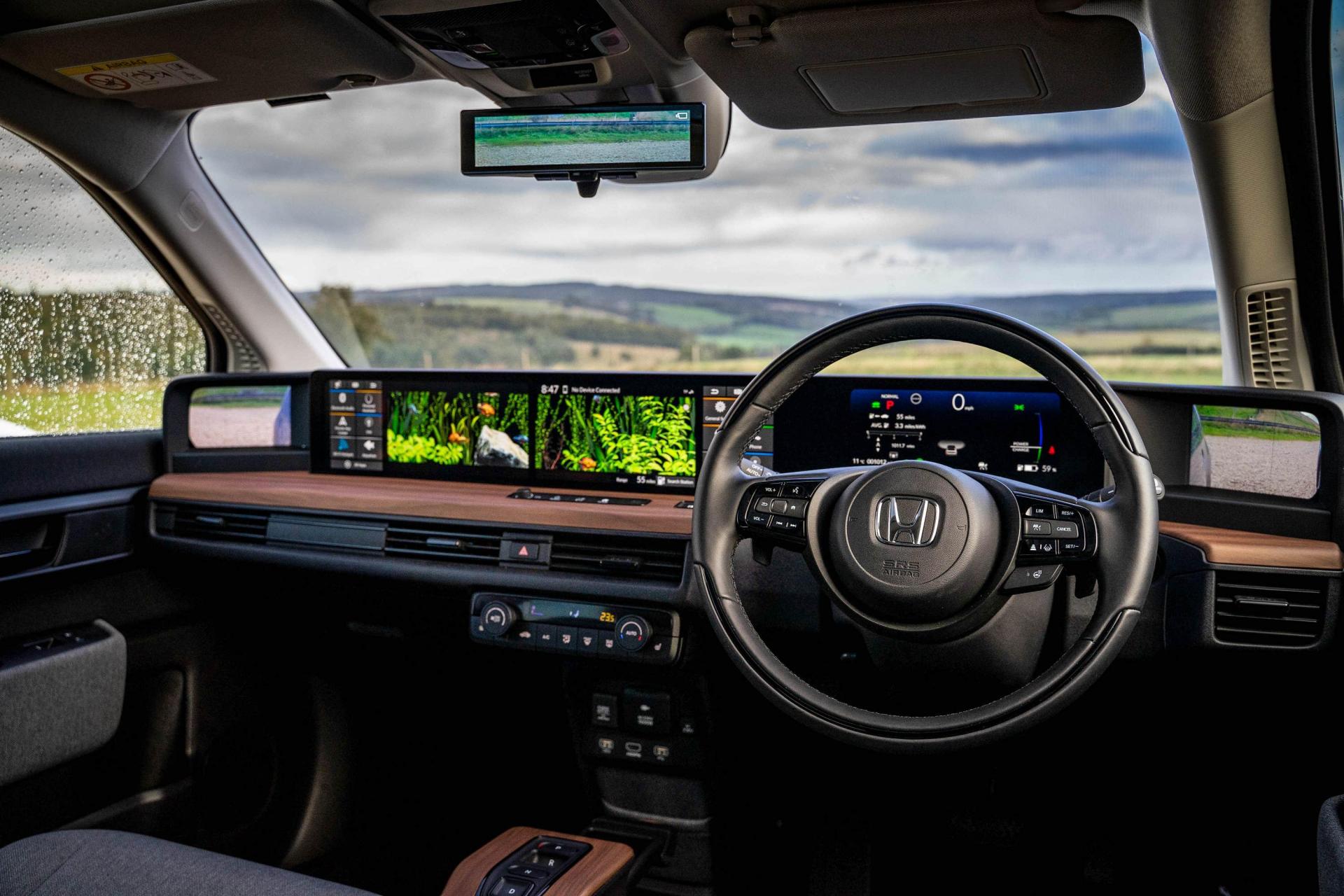 The interior of the e is impressively futuristic.

Stepping in for the first time, things feel strange. You sit relatively high and what feels like just centimetres away from the base of the windscreen, looking out at the road over the collection of screens that are arranged like digital photo frames along a windowsill. Unsurprisingly, things take a little while to get used to. Like the Polestar 2, the e starts automatically when you jump in – cue hitting the start button anyway by force of habit and accidentally turning it off.

The wing ‘mirror’ cameras still feel alien too, although this is more my fault than the Honda’s – I’m just not sure I trust how far away any cars in the next lane appear to be. Soon though, things start to improve. A few miles later and the e’s instant acceleration is already proving addictive – embarrassing other cars at traffic lights and diving confidently out of junctions. These aren’t traits unique to the e, though: almost any EV on sale can pull off the same tricks. Where Honda has really moved the bar is the way the e handles.

Unlike Peugeot, Vauxhall and Mini, Honda didn’t fancy basing its new electric supermini on the underpinnings of an existing petrol-powered hatchback. It could have, though. There are plenty of small cars in Honda’s portfolio over the top of which the e’s body could have been slid awkwardly like an ill-fitting Christmas jumper. 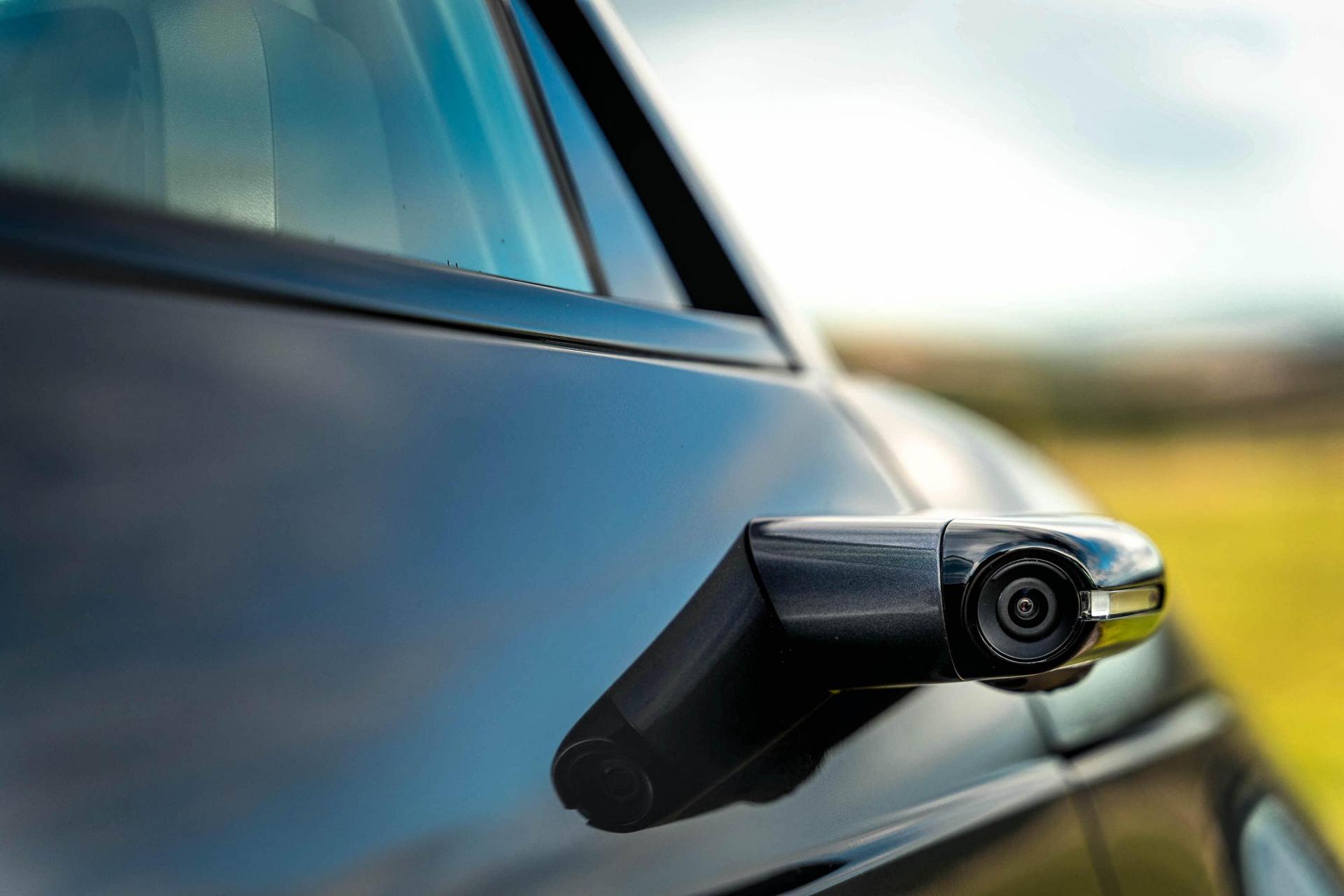 Side cameras project an image to screen positioned inside the camera.

No, Honda – being Honda – decided to engineer an entirely new one just for the e, and it’s paid dividends. For starters, its rear-wheel drive – tick! – has near-50:50 weight distribution and a low centre of gravity – tick! – and some very fancy rear suspension for a car of this size and price.

As a result, it doesn’t feel like your average supermini – nor your average small EV. There’s no torque steer, no unwieldy top-heavy cornering, and almost comedic levels of grip to go with the instant shove from the electric motor. All in all, it’s a bit of a hoot.

That’s all well and good for the occasional bit of larking around, of course, but the e has some genuine sensibility about it too. Being rear-wheel-drive means the e can have a city-friendly petite turning circle. Meanwhile, Honda’s decision to fit independent suspension all round was to benefit refinement on long journeys as much as anything else.

Which brings me to the elephant in the room: range. The e’s 35.5kWh battery will take you around 110 miles (177 kilometres) in the real world – a considerable amount less than rivals such as the Peugeot e-208, and just small enough to be a hindrance on longer commutes. 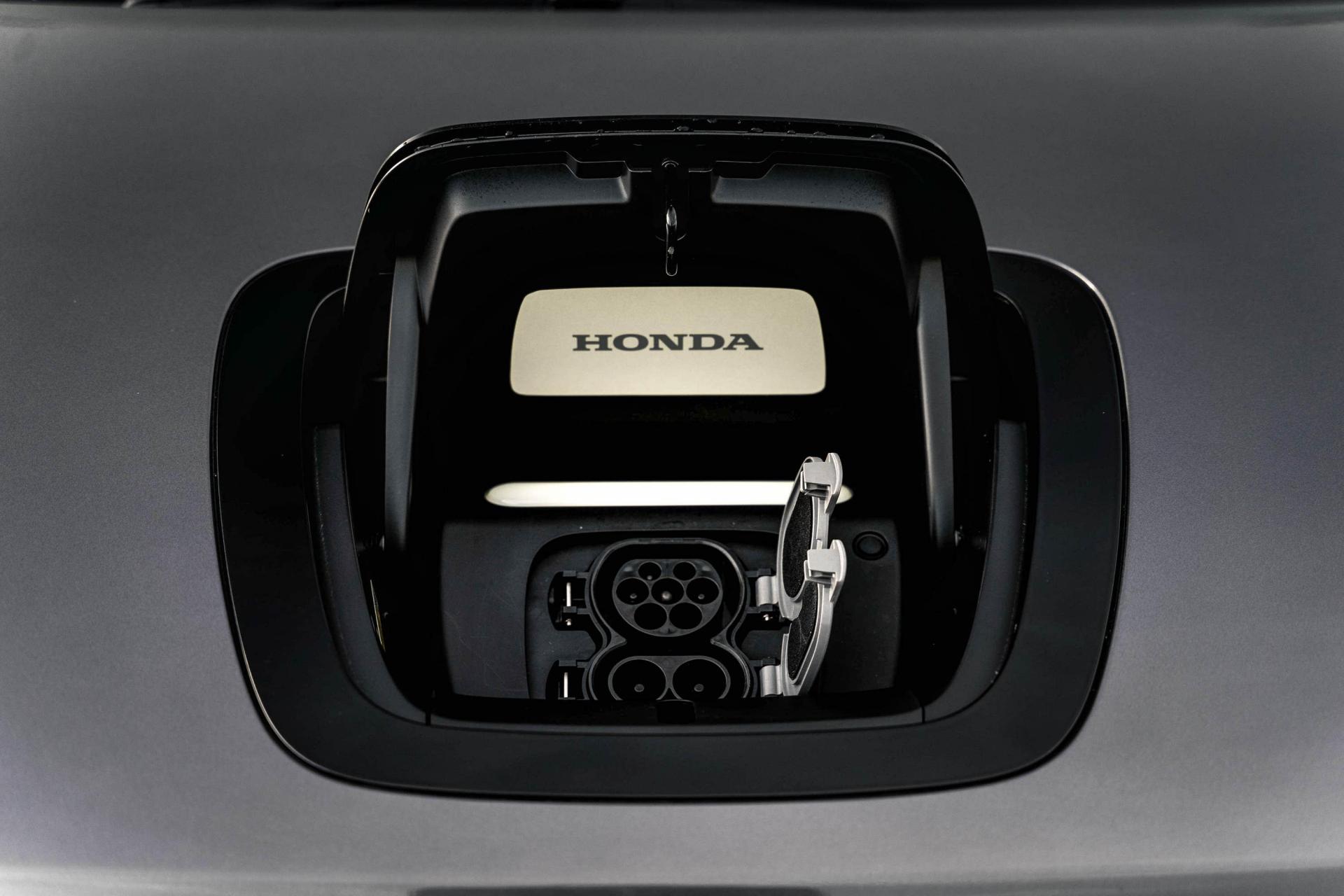 Charging is via a port at the very front of the car.

Thing is though, the e is unashamedly a car you buy with your heart, not your head. Of course you don’t choose it for its range, or its tiny 177-litre boot, or its price: you buy the e because you fall for its charms, its gorgeous design touches, its friendly little face and neon yellow paint. I consider myself part of that camp too: the e is flawed and expensive but fabulous. I want one desperately and I don’t care who knows it.

As my time with the e comes to an end, I’m reminded of a quote from The Simpsons’ ever-temperamental Superintendent Chalmers. ‘I used to think a car was about getting from point A to point B, and on weekends, point C. But that man died the moment I laid eyes on the 1979 Honda Accord.’ And d’you know what? I think he’d approve of its modern-day electric descendant just as much. 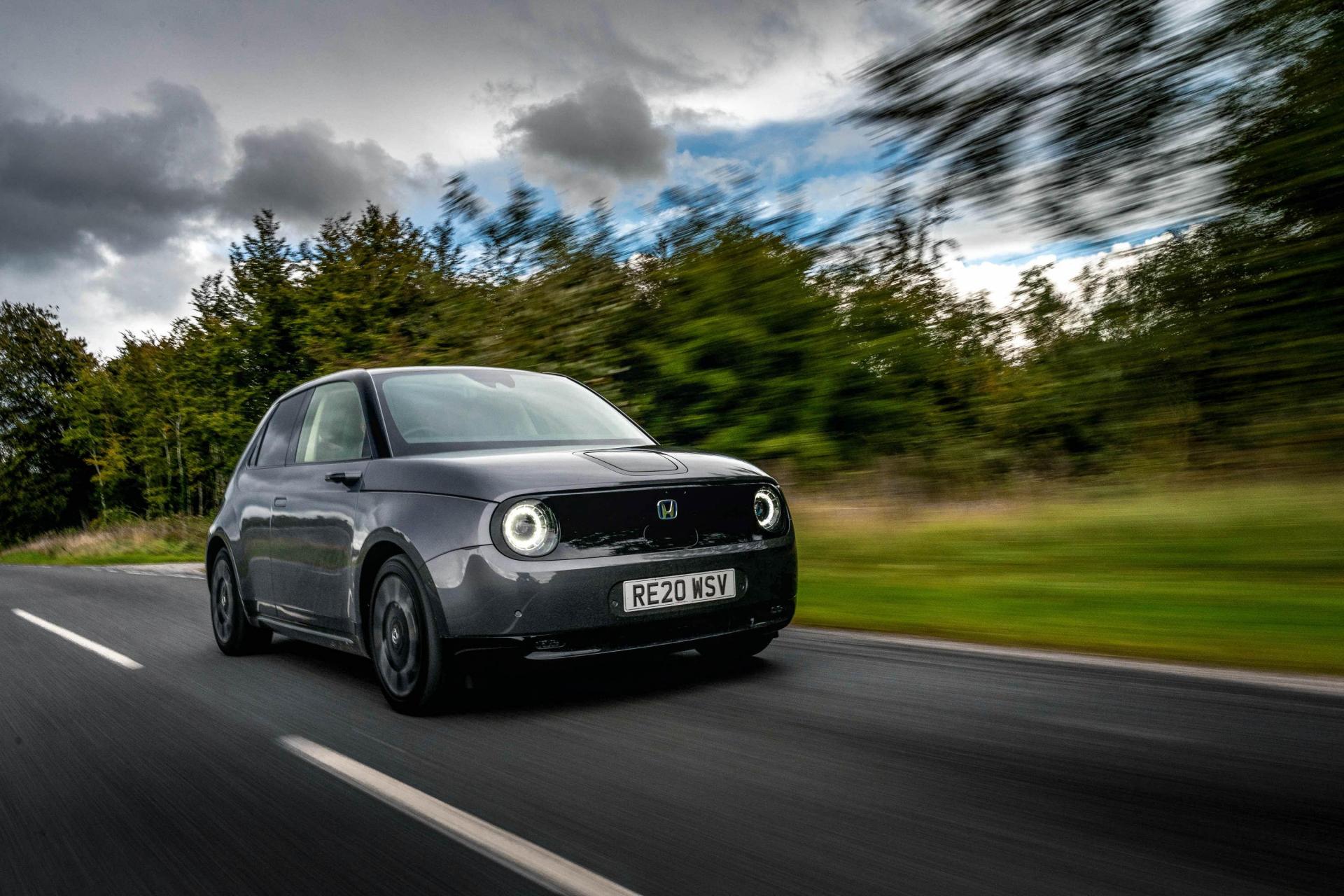 The Honda sends electric power to the rear wheels alone.