Ministers who between them spent €16,700 on taxpayer-funded adverts praising themselves in a 32-page supplement in the Labour Party’s newspaper Kullhadd had breached the ministerial code of ethics, Standards Commissioner George Hyzler has concluded.

An investigation found that 28 pages were taken up by government adverts extolling the achievements of ministries and their entities, in breach of the Standards Commissioner’s guidelines on advertising.

The Parliamentary Standards Committee met on Monday and decided to publish the report in its entirety. The matter will be discussed on Thursday afternoon when Hyzler is expected to appear before the committee to explain his report.

The investigation was requested by NGO Repubblika.

Only four ministries – the Office of the Prime Minister, tourism (Clayton Bartolo), foreign affairs (Evarist Bartolo) and finance (Clyde Caruana) – did not financially support the publication and trumpet their own accomplishments through adverts.

Hyzler said that while the newspaper had the right to publish a supplement of this nature, the ministers concerned should not have spent public funds to support it as this was a lack of separation between the role of minister and member of a political party, constituting misuse of public funds.

This also represented a breach of the principle of impartiality of the public service, he said, because expenditure by ministries is approved by senior officials in the public service, who were then placed in a situation where they had to approve public funds for political purposes.

In the case of ministers Aaron Farrugia, Byron Camilleri, Clint Camilleri, Miriam Dalli, Anton Refalo and Julia Farrugia Portelli, their behaviour was toned down by the fact that they did not include their own photos in the adverts. Former minister Carmelo Abela also did not have a prominent photo in the adverts.

On the other hand, this behaviour was aggravated in the case of Minister Ian Borg, former Minister Edward Zammit Lewis and former Parliamentary Secretary MP Chris Agius, “due to the partisan nature of their advertisements”. 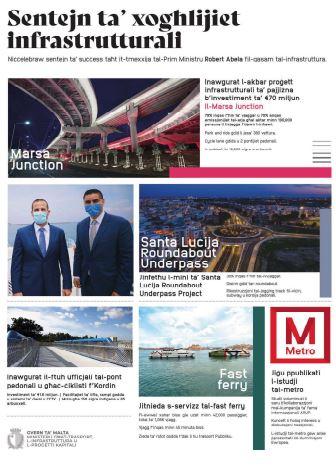 One page of Ian Borg's advert on the supplement

Will ministers be asked to pay up?

Hyzler said in his report that it was up to the Standards Committee to decide on what remedy was appropriate in the circumstances. In the House of Commons of the United Kingdom, it was the practice that if an MP was found to have misused public resources, he was asked to pay it back to the state, he said.

Published last August, the commissioner's guidelines were meant to ensure that government adverts and promotional material were factually correct. The commissioner had also said that government-sponsored publications should indicate they were publicly funded for the sake of transparency, and ministers should direct public funds to the media for advertising according to fair and objective criteria.

According to the guidelines, state adverts and promotional material produced by the government and public entities should not include partisan content.

Pictures of ministers, or even their names, in government adverts would see them fall foul of the guidelines.

The advertising guidelines were drafted by the commissioner after he found that a €7,000 advertising campaign, prominently featuring former OPM Minister Carmelo Abela, did not contain any “information of value” to the public and was intended to boost his image.