A Nationalist MEP who was subject to a death threat on Facebook has said she wants to "make sure a culture of hatred doesn't grow" in Maltese society.

Roberta Metsola was threatened by Josef Farrugia, who said she should watch her back or she would end up like journalist Daphne Caruana Galizia, who was killed by a car bomb almost two years ago.

He received a warning and a conditional discharge after admitting harassment and causing his victim to fear violence.

Dr Metsola said that while social media could be a force for good, it shouldn’t be abused to say things that would be illegal or unacceptable to say face to face.

"This is not a case of me being in fear or intimidated, but I want to send a message that if you are a young boy or girl on this island and you would like to be active and vocal, then you need to be protected." 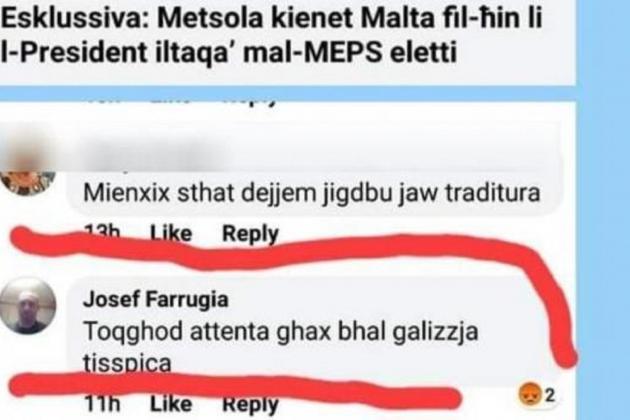 Dr Metsola said she frequently receives threats both online and through the post, and that it was significant that the police had taken Mr Farrugia to court because they deemed it actionable before the laws of Malta.

“If people can get away with writing anything then others might feel instigated to do the same and a culture of impunity, where nothing happens to anyone, would only serve to fester more hatred,” she said.

“I would like to make sure that in this society a culture of hatred doesn’t grow.”

Following criminal action against him, Mr Farrugia apologised on Facebook, claiming that it had never been his intention to cause harm to anyone or to incite violence against Roberta Metsola.

In court, he admitted harassment and causing his victim to fear violence.

During sentencing, Magistrate Joe Mifsud said that while “everyone is within rights to express himself, nobody should be made to feel threatened. Nor should anyone give the impression that someone ought to be murdered in the way Daphne Caruana Galizia was”.