With their new album Regħbus just off to a very positive launch yesterday, the guys behind the band Mistura place the entire political structure under fire. Interview by Ramona Depares.

When did work on the new album start?

We started working on the new album in 2015, when we included our first song from it, called Ifraħ għax Iblaħ, immediately into our live setlist as soon as it was written.

This song was a direct reaction to what the crowd was telling us non-verbally, namely that we needed a happy-go-lucky song for them to dance to. We obviously made a sort of statement with it, with the title of the song explaining it all. The rest of the album was written by 2016 and recorded in 2017.

Your lyrics play a very strong part in your music – is this also true of the new album?

Most people just want a beat to dance to while drinking beer, and we appreciate that. But, apart from a couple of tongue-in-cheek exceptions, that’s not us.

We might be a cliché in that we would like to speak about issues we consider important, and we’ll not shy from including politics, current affairs and any other topic that catches our fancy – and to sing about it in some form or another.

We’re a sort of Walter Micallef on steroids because of this attitude mixed with the loud rock music that we play. So yes – lyrics play a very strong part of Mistura.

Is there a particular theme?

The album is being called Regħbus. It is a play on words, mixing regħba (greed) and rebus (chaos), so the theme is pretty self-evident from the title itself. Left to its own devices, capitalism is a game of Monopoly where the few will end up with all the money while the rest of us lose the game.

Apart from commendable social ser­vices, including health and education, when it comes to the business class we’re unfortunately seeing this sort of free-for-all game going on in front of our own eyes, which might seem good in the short term but in the long term we doubt we will still be thinking the same. Add business-friendly politicians always eager to please everyone, the sense of entitlement of many, their adulation of politicians, a multitude of distractions, mix everything with the ‘u iva mhux xorta’ attitude, and a lot of mindless positivity, and there you have it. Our grim Regħbus theme.

Even before launching the full album last week, you had already released a track – Tuna Isimkom – from the record. What made you pick this track?

This song targets the people who are ruining the country with over-development and never-ending construction work. It basically calls out for these legislators and developers not to hide behind big names of organisations and consortia.

How about, instead, erecting a nice monument engraved with their personal names, so that future generations can remember who transformed Malta into a churning dirt pot that screams to heaven?

From a musical perspective, it’s the most prog-rock we’ve ever been to date; the track has a complex structure and changes time signatures as we go along.

You also accompanied this track with a video. What can you tell us about that?

This song takes one full minute for the first verse to start, and it doesn’t have a chorus. It has a minute and a half-long solo/musical interlude in the middle and is a blunt, direct letter to building contractors who show no scruple.

It’s the antithesis of your average, politically-correct, mindless, happy-go-lucky, radio pop song. Why did we choose such a song instead of a more accessible one? It’s a question we discussed at length and the sort of conclusion that we reached is that we’re past the stage of trying to please the lowest common denominator. Instead, we’re doing more what we like and what we think might be deemed more relevant. 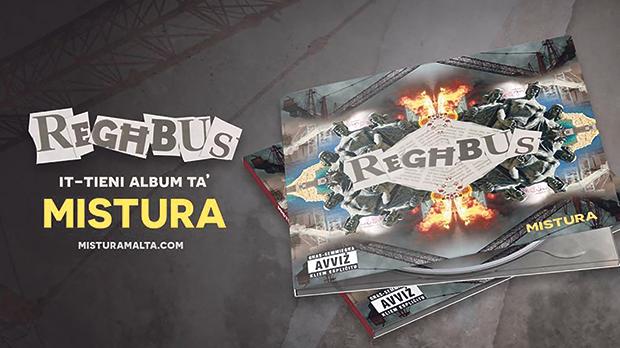 Do you have a favourite track?

Choosing a favourite song is hard, as all songs express a sentiment or feeling and thoughts we wish to express that are close to our heart. If Malcolm had to choose one, that would be a song called Little Malta, as it sums up the gist of the whole album and musically is also the sound and feel he wishes the band to move forward to.

Mark agrees, and includes another one called Thank You Jesus, because these are the most proggy tracks in the album. Mat­thew, on the other hand, loves L-Intitolat, because it reminds him of a bassline by Andy Rourke of the Smiths and Antonio choses a song called Pop, since it is the most untypical song for the band and yet he had the most fun working on it.

How have you seen your sound/style change since your debut in 2012?

The band started as an acoustic duo and constantly changed, first to an acoustic band and then to a rock band. It was always the next logical step for us to kind of upgrade the sound until we could play gigs as an electric band.

As an electric band, we also passed through a transitional period, from a Pink Floydy sort of sound to a more progressive rock direction with Mark (the drummer) kicking it up a notch. So it has always been changing, one could say for the better.

What was the process to record this second album like?

We did almost everything DIY with the help of some friends on specific tasks such as the recording of drums and the artwork. Apart from that, it was a lot of hard work and a learning curve to improve on our previous works - from the writing of the songs, the development of the theme, to the arrangement and production, to the recording of guide tracks and the eventual recording of the tracks, to mixing and mastering and artwork, printing, videos and PR and other logistics.