Large rocks came off as a man jumped off the iconic Azure Window in Gozo in this video uploaded to Youtube yesterday.

The structure, a major tourist attraction, has been eroding rapidly and several large chunks fell off in recent years.

The Gozo Tourism Association and the San Lawrenz council earlier this year said that allowing visitors to walk on top was of grave concern but they lacked the resources needed to monitor the area adequately.

In 2013, a geological rock assessment by the Environment Ministry said the structure is not facing imminent collapse but further erosion is “inevitable”.

The three-month study, conducted by local firm Geoscience Consulting Ltd, concluded that sea erosion did not threaten the window’s immediate structural integrity as had previously been postulated. 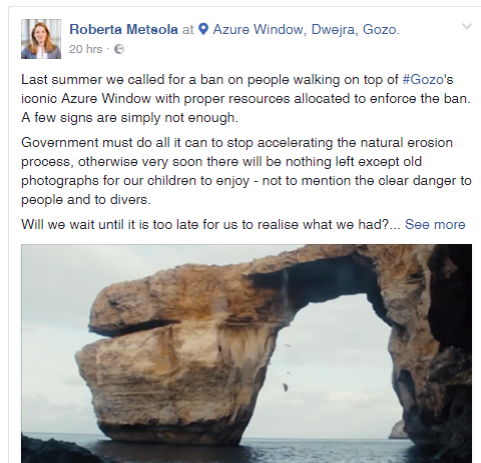 As much as 90 per cent of the outer layer is estimated to have eroded over the past 30 years.