The ‘body’ of a deceased Roman aristocrat was put on display in a prominent area of the Roman Villa (Domus Romana) in Rabat, as part of a historic re-enactment on Sunday.

The re-enactment started from the villa complex and made its way to St Paul’s Catacombs, where the aristocrat was laid to rest.

Heritage Malta invited the public to participate in this Roman’s last journey in a day packed with activities.

The event, entitled Mortem was inspired by the nine-day ancient Roman festival Parentalia which used to be held in ancient Rome between February 13 and 21 in honour of the Roman people’s ancestors and their departed loved ones.

Although Parentalia was a holiday on the Roman religious calendar, its observances were mainly domestic and familial.

During these celebrations, Romans and early Christians renewed funerary rites and hosted commemorative meals known as refrigerium or agape, at the catacombs.

The weekend event aimed to offer an immersive experience for both adults and children.

They could also take part in excavations with real archaeologists, participate in a treasure hunt and get up close and personal with some of the artefacts showcased at St Paul’s Catacombs museum together with the senior curator.

A highlight of the event was a new 3D room which was opened to the public for the first time yesterday.

Heritage Malta said the public had the chance to navigate through 3D models of a number of catacombs without having to actually go down to the ancient chambers.

Participants took part in an ancient Roman funeral. They also participated in excavations with real archaeologists. 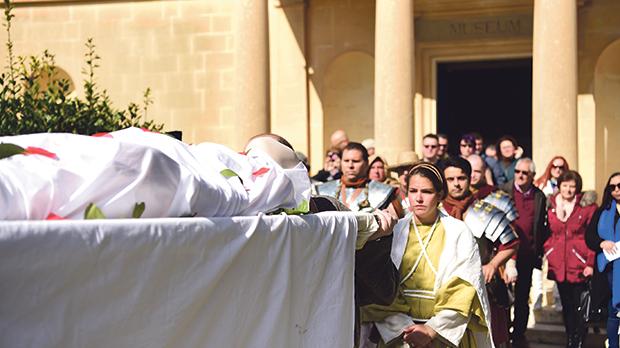