Plans to construct a small visitors’ centre at the Tas-Silġ archaeological complex have gone back to the drawing board after excavations uncovered parts of a renowned Roman temple which has been described as a highly significant find.

Heritage Malta had originally planned to restore a partially collapsed 18th century farmhouse and last year, together with the Department of Classics and Archaeology at the University of Malta, embarked on a four-week investigation of the archaeological merit of the site, which is close to Żejtun and overlooks Marsaxlokk.

“The farmhouse was built on a corner of the temples, so the chance of finding remains at the site was always very high, but it was never investigated thoroughly,” David Cardona, senior curator of Phoenician, Roman and Medieval Sites, told Times of Malta.

“Thanks to the excavation work we carried out with the students, we realised that the remains underneath the farm were highly valuable and that’s when the project changed from fixing up the farmhouse to working to uncover what was left at the bottom.”

A single room, whose original roof and walls are still intact, has been left as a reminder of the farmhouse.

Saviour Formosa, of the Department of Digitalisation, constructed a 3D model of the remaining structure, which will eventually be incorporated into an interactive model allowing people to see what the site looked like at various points in its millennia-long history.

The model is made available through the collaboration between Heritage Malta and SintegraM program.  This program, driven by Formosa, seeks to develop spatial data and enhance geo-spatial capacities in Malta and its impact on social wellbeing.

Maxine Anastasi, of the Department of Archaeology and Classics, said that students in their key formative training were fortunate to have the opportunity to excavate a slice of “untouched archaeology”.

“We were able to find a corner wall, complete with opus signinum flooring, that formed part of the temple,” Anastasi told Times of Malta.

“Instead of building directly on the ground, particularly where the rock was fragile, the Romans would dig trenches and place large limestone ashlar blocks to raise a platform,” she said.

“Based on the trenches that we’ve found here, which gives us an idea of the foundation and floor levels of the temple, we can imagine a large collonaded peristyle with a sizable façade.” 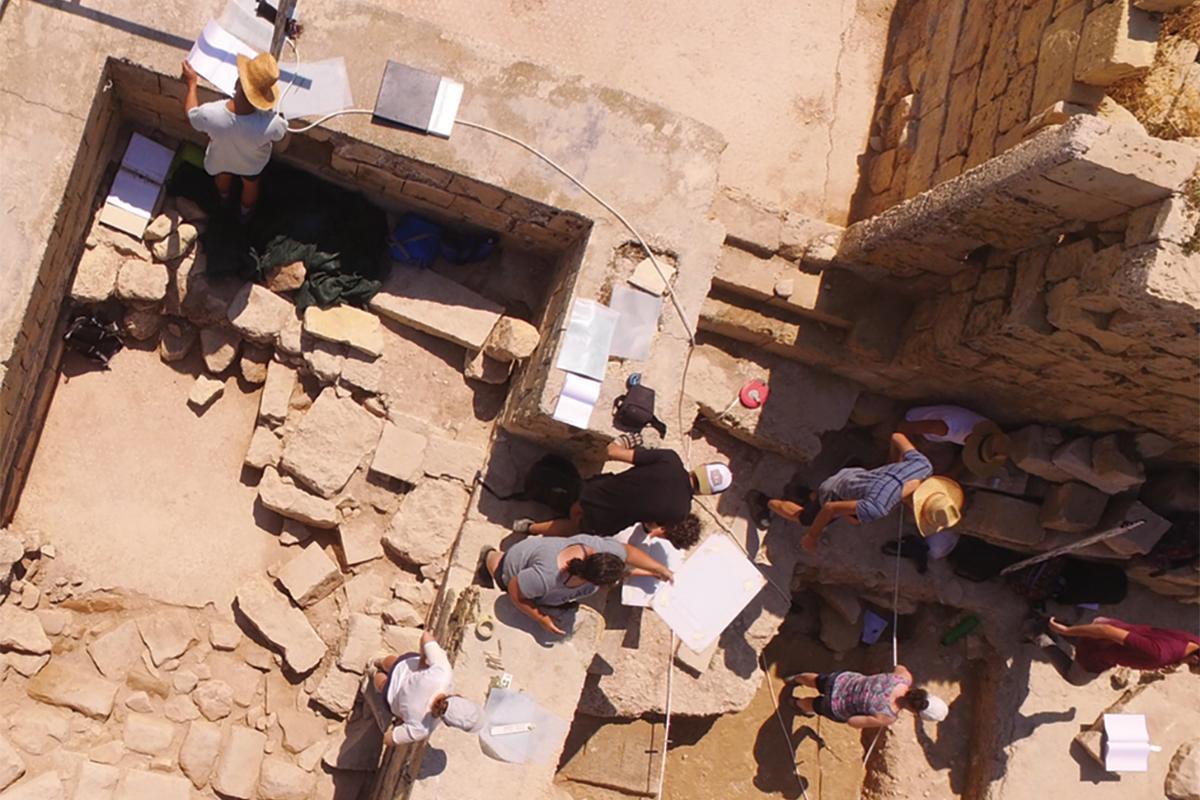 Students on site during excavation works.

Unfortunately, Anastasi adds, the multi-period use of the site over thousands of years saw the disappearance of stones that made up the body of the temple’s architecture, likely re-used throughout and still a part of surrounding dwellings and agricultural structures in the area.

“Malta is densely populated, with lots of buildings with a lot of history. Archaeology tended not to survive, so finding foundations intact as we have here is really a very significant find.”

The investigation into the site also uncovered the history of the farmhouse, likely built in the late 1700s, bringing new insight into how locals reacted with the site throughout different periods.

“Through old property maps we were able to trace all the original rooms and the full structure, deducing that it was built over one corner of the original temple,” Anastasi says.

“We were lucky that when the farmhouse was being built, they didn’t actually destroy anything they found there, but dismantled and cleared the surface, laying their bricks directly onto the Roman foundations.”

Given its layers of rich historical importance, was there a reason why so many cultures were drawn to Tas-Silġ?

That, Anastasi explains, could be the million-dollar question.

“Contemporarily, we can think of places like Mdina and Rabat where we are aware that our current cities are built on top of older ones with countless heritage sites and have been pretty much constantly inhabited for thousands of years,” Anastasi says.

“While there’s still uncertainty as to whether Tas-Silġ was constantly inhabited in between periods, there is no doubt that it is not only an important sanctuary site for the Punic period in Malta but one of the very few internationally known sanctuaries across the Mediterranean and throughout the Punic world.”