Rough seas have exposed the fragility of Gozo's Azure Window, with waves having broken off a large slab at the base of one of its cliffs.

In a photo taken by Anthony Grech as seas battered the Dwejra shoreline, bare limestone contrasts strongly with the weathered, darker rock that surrounds it.

This is the second time this week that violent seas at Dwejra have made headlines. Earlier this week, seven people had to be rescued after they were swept away into the sea in the area.

Concerns about the iconic site's long-term future have grown over the past year, although most attention has focused on the rock formation's arch, which is gradually being eroded.

Walking across the arch is now a fineable offence, with public pressure for a ban growing after aerial photos showed visible cracks in the rock and amateur video of chunks of rock falling as a daredevil leapt off the rock formation angering the public.

The Azure Window was created after two limestone sea caves collapsed. It is one of the Maltese Islands' most distinctive sites, attracting thousands of tourists every year. 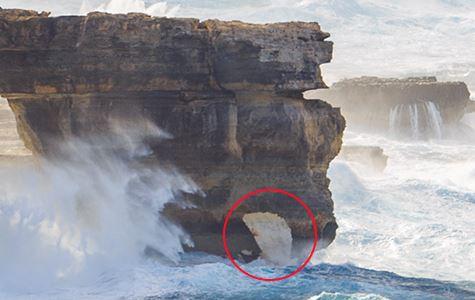 A close-up of the damage. Extract from photo by Anthony Grech