Nurses working at healthcare centres have been instructed by their union to refrain from carrying out a number of jobs as part of industrial action called over a row over triaging of patients.

Throughout the pandemic, anyone visiting a healthcare centre is asked a series of simple questions to ensure patients with COVID-19 symptoms do not mix with others. Automated temperature checks are also carried out upon entry.

The questions seek to ascertain whether a patient has recently had a fever, been abroad or had any COVID-19-related symptoms.

Until recently, it was doctors who were asking patients these questions at the door, after the Malta Union for Midwives and Nurses (MUMN) objected to nurses doing the job.

But in the past days, primary health authorities decided doctors should focus on seeing to patients and instead instructed reception personnel at health centres to carry out the triaging process.

This prompted MUMN president Paul Pace to issue a memo ordering directives to those in healthcare centres. He argued the triaging process should be done only by qualified medical staff - though the union has previously insisted that this should not done by nurses.

In a memo sent to nurses, seen by Times of Malta, Pace said that “since stupid decisions are being taken behind the union’s back by Primary Healthcare management, directives had to be issued”.

“Such directives are a health and safety directives [sic] as to protect you,” the memo read.

What are the directives?

The nurses have been instructed to stop “all bloodletting” and “all non-essential services such as clinics”.

Pace said that as a sign of goodwill to patients, those visiting the clinic for certain specific issues, including vaccination, will be treated.

The directives will be lifted only once the triaging is carried out by medical staff.

Times of Malta is informed the government is looking into the issue.

Meanwhile, Medical Association of Malta (MAM) chief Martin Balzan said the issue is between the government and the MUMN. He insisted, however, that the job is not one that can only be done by doctors.

“Doctors are willing to help if those carrying out the triaging need assistance. But all this job entails is asking a few simple questions. Doctors were wasting their precious time on this to the detriment of patients. But ultimately, it’s not the MAM who needs to sort this out, but the authorities,” Balzan said. 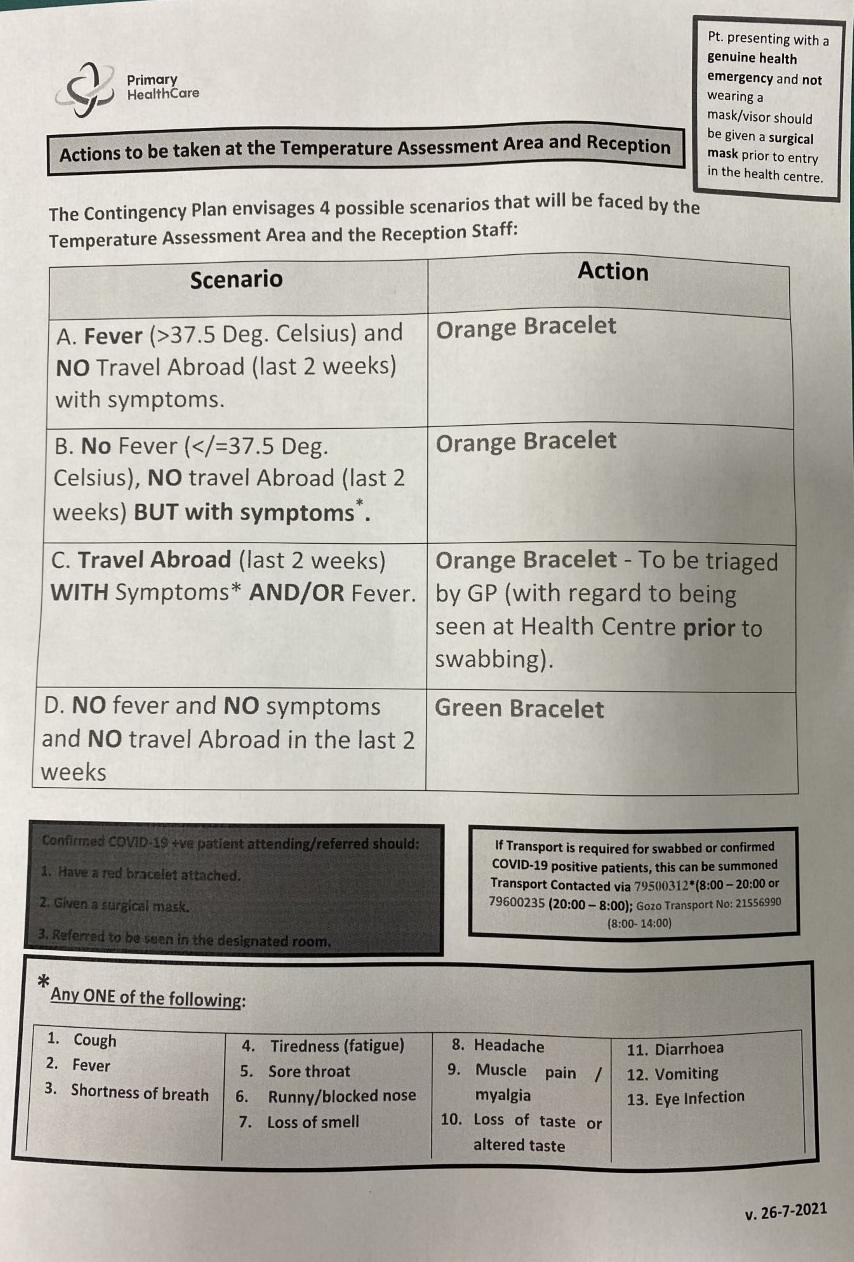 The triaging process is intended to identify any patients who may be COVID-19 positive, to separate them from other patients at health centres.

A doctor who works at a healthcare centre told Times of Malta the triaging is “easy to follow” and involves asking the same set of questions and an automated temperature check.

“We’ve had to have a doctor in every health centre who at all times is not doing more essential medical work and instead is being used for triage, where it could easily be done even by a non-medical, non-clinical person,” the doctor, who wished to remain anonymous, said.