A pair of rural New Zealand police officers dramatically arrested the suspected Christchurch gunman 36 minutes after authorities were alerted, it emerged Saturday, as the prime minister hailed their bravery.

Jacinda Ardern said the alleged attacker, 28-year-old Australian Brenton Tarrant, would surely have killed even more people than the 50 worshippers he massacred in two mosques were it not for the policemen.

"The offender was mobile, there were two other firearms in the vehicle that the offender was in, and it absolutely was his intention to continue with his attack," Ardern told reporters in Christchurch. 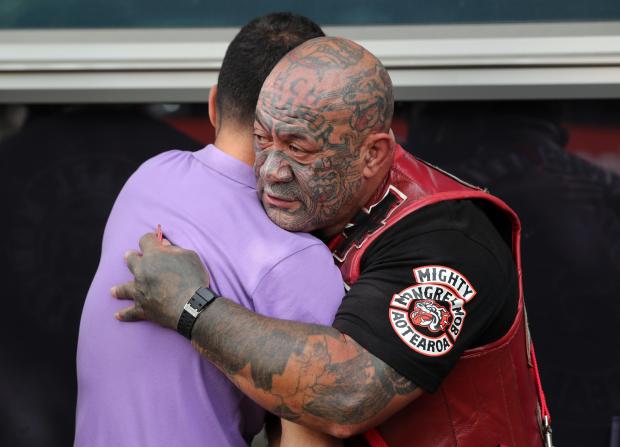 Members of rival gangs and residents pay their respect at Hagley College for the victims of the mosques attacks in Christchurch.

Grainy video apparently shot from a passing car shows the gunman's light-coloured vehicle at the side of a busy road, rammed against the kerb by a police car and with one of its front wheels suspended in the air.

Two police officers - one of whom appears to be armed only with a handgun -- can be seen pointing their weapons at the open passenger-side door.

"They were rural community cops I understand from Lincoln (a nearby town) who were present here. Anyone who has seen the footage... they put New Zealand first," Ardern said.

"The individual charged was in custody 36 minutes from receiving the first call," she said.

The officers can be seen dragging a black-clad figure away from the vehicle, as motorists slowly drove by on the other side of the city carriageway.

Police Commissioner Mike Bush also praised the officers who brought the massacre to a halt.

"I would also like to commend -- and some of you would have seen, the brave actions on social media of police staff who responded to this incident," he said.

Ardern said 39 people remained in hospital, of whom 11 were in intensive care.

Tarrant, 28, flashed a white power gesture as he appeared in court Saturday charged with one count of murder. Further charges are expected to follow.