The Russian Black Fleet flagship seriously damaged during operations against Ukraine late on Wednesday was in Malta in December 1989 for the superpower summit that, ironically, at the time marked the end of the cold war.

On Thursday, Russian state media reported that the Moskva was "seriously damaged" by an explosion, as Moscow threatened to strike Kyiv's command centres.

Russia denied Ukrainian claims that they had struck the warship, adding that it was investigating the cause of a fire that caused ammunition to explode, almost sinking the guided-missile cruiser.

The Moskva had been blockading the southern Ukrainian city of Mariupol.

However, rewind 32 years and the Moskva, then named the Slava, had hosted Soviet President Mikhail  Gorbachev at the Malta  'Seasick Summit' - so called because of the rough weather which struck Malta as Gorbachev and US President George Bush met on the cruise ship Maxim Gorky in Marsaxlokk Bay.

The talks, which put Malta on the world stage, were credited by the then Soviet foreign minister Eduard Shevardnadze for having ended the cold war. 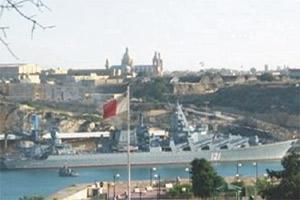 The Moskva seen in Grand Harbour in 2004.

The Slava served as the Russian delegation’s quarters while in Malta, anchored near the Gorky in Marsaxlokk Bay a few metres away from the USS Belknap, where the US delegation stayed.

The Slava, now renamed Moskva, returned to Malta, this time berthing in Grand Harbour, in 2004.