La La Land star Ryan Gosling may have missed out on an Oscar but his composure amidst the chaos that surrounded the best picture prize has catapulted him into the running to be named the next James Bond.

Gosling could be seen chuckling on stage as it was revealed that La La Land had mistakenly been given the biggest award at the Oscars instead of Moonlight. 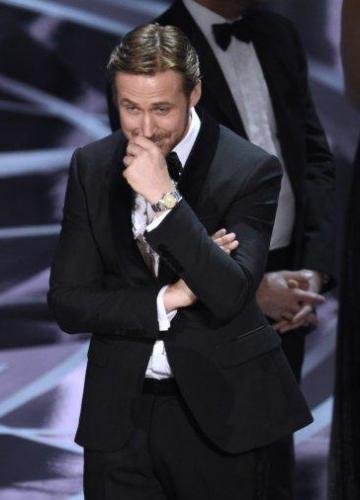 Gosling had to stifle a giggle as chaos unfolded around him. Photo: Twitter

The actor was on stage with his co-stars and the filmmakers as they accepted the top gong of the evening, before it became apparent the wrong movie had been read out by its presenters Warren Beatty and Faye Dunaway.

In the midst of the confusion, Ryan held his hand up to his face in an attempt to hide his amused giggle.

Bookmakers William Hill have since cut his price to be named the successor to Daniel Craig as the spy with the licence to kill from 14/1 to 10/1.

Rupert Adams, a spokesman for William Hill, said: "Ryan Gosling showed an admirable sense of humour and his composure was worthy of Mr Bond - the coolest cucumber of the lot."

Gosling, 36, attended the ceremony without his wife Eva Mendes, instead bringing his sister Mandi with him to the awards show.

The plunging gold gown she wore drew the attention of viewers on Twitter, who suggested the blonde might overshadow her brother, who was nominated for the best actor prize but lost out to Casey Affleck.

One fan joked: "For the love of @VictoriasSecret, who belongs to the pair of boobs sitting next to Ryan Gosling at the #Oscars ?!?" while another wrote: "Evidently Ryan Gosling brought his sister as his Oscars date and um, uh... Good genes in that family. #GoldenGlobes"

Michael Fassbender is currently at 11/4 to step into Craig's shoes when he steps down, while Grantchester star James Norton is 3/1, Taboo actor Tom Hardy is 11/4 and Poldark heartthrob Aidan Turner is 9/2.