Low-cost travel giant Ryanair is setting up a new airline to be based in Malta.

Industry sources said the Irish carrier’s holding company is in the process of setting up a new airline that will incorporate the 61 Ryanair routes to and from the island, effectively replacing it.

Ryanair has also committed, during negotiations with the government, to the generation of several other new routes and will be doubling its fleet in Malta to 10 planes, with plans to grow even further in the near future.

These planes, and a number of others in the Ryanair fleet, will be registered on the Maltese aviation register.

The low-cost market leader will also be setting up hangar facilities for repair and maintenance operations in Malta.

The contract signing is described as “imminent”. Talks between Ryanair’s David O’Brien and Tourism Minister Konrad Mizzi have been ongoing for several months. 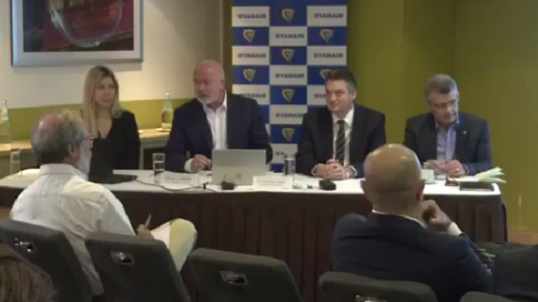 The new headquarters of Malta Air, as the company will be called, will employ about 350 people within the next three years, one senior government official said.

The Sunday Times of Malta reports that the government will hold golden shares in the new airline and will have a veto when it comes to issues related to sale of the airline to third parties.

“We primarily wanted to lock in Ryanair to the island as it is the main carrier here and we have therefore got a certain level of dependency on it as a country,” a government source familiar with the workings of the deal said.

From a consumer point of view, the source said, Malta Air would be priced as competitively as Ryan Air has been so far.

Other sources within the industry said Ryanair is also moving to grow its operations across Europe, having recently acquired Austria’s Lauda Air. Its operations to and from Malta had been among Ryanair’s best performing, which probably informed the company’s decision to choose the island as a base for a new venture.

Industry insiders told The Sunday Times that the Irish giant’s “show of trust” in Malta’s potential would send out the signal that the island meant business.  It has long been an open secret in the aviation sector that the government hopes to reposition Malta from a ‘holiday’ to a ‘transit’ destination.

Ryanair significantly increasing its Malta operations could help in the island’s bid to transform itself into a major hub for the sector.

“If you follow the way the industry is changing – with the fast approaching introduction of new planes with medium to long haul capabilities – a location like Malta could start to make sense as a connecting airport,” an industry veteran said.

Good news, were it not for the fact that since ⁦@KonradMizzi⁩ is involved, there must be a catch. Is ⁦@AirMalta⁩ being privatised or folded behind our backs? https://t.co/VAMNomEED1

This, in part, could also explain the drive to push Air Malta into medium haul flights, cargo and legacy, as well as pipeline plans to significantly grow  Luqa airport.

Sources in the Civil Aviation Department said work had started a few months ago to recruit more personnel to handle the arrival of Malta Air.

Meanwhile, political observers pointed out that the move could be viewed as an attempt to gradually scale back Air Malta, a perennial government albatross.

However, both government and industry sources were quick to dispel concerns saying that this was “unlikely” and “illogical”.

“It is not in Ryanair’s interest to fly Air Malta out of the sky. They hardly compete as it is anyway,” an industry expert said.