Local celebrity chef Sean Gravina gives Stephanie Fsadni some advice on how to cook food safely at beach barbecues and tips on how to grill that steak to perfection.

Barbecued food goes down incredibly well by the beach but can easily turn into an unpleasant experience if not enough care is taken in the transportation, preparation and cooking of food.

The first important thing to do is to keep any meat or poultry refrigerated until you arrive at your destination.

“You don’t want your meat, or chicken especially, to reach the danger zone temperature which is between 5˚C and 60˚C, when bacteria multiply quicker,” says chef Sean Gravina.

At the beach, coolers should be kept in the shade. Those left in the sun heat quickly and become “warmers” rather than coolers.

Chicken and beef should be left out just a couple of minutes before cooking, just to “remove the chill”, says Gravina. If meat or poultry are left out for long, they can become contaminated.

Another important consideration is to take enough utensils or clean them properly to reduce as much as possible the risk of cross-contamination.

“Raw food thongs will contain bacteria and if you use them for meat that has been cooked, you might transfer the bacteria that you would have killed by cooking back into the meat.”

Good lighting is important to see what you’re cooking but since one does not usually take a meat thermometer to the beach, it’s still quite difficult to assess whether food has been cooked properly.

“The main problem is chicken, as beef nowadays is mainly cooked medium rare,” points out Gravina. “The trick with chicken is, if the cut – for example chicken breast – is too thick, cut it as thinly as possible horizontally; this way you will cook it faster and it won’t dry out.

“If we have chicken legs, the best way is to cook them low and slow. That way you cook the chicken at a lower temperature for a long period of time to make sure it’s cooked internally and it does not dry up.”

If one is concerned about the safety of chicken, one can give it a half bake in the oven before leaving for the BBQ and then just char it on a high flame.

As regards meet, Gravina recommends buying fresh produce from a trusted butcher. The best cuts for grilling are prime cuts that do not require a long period of cooking, for example, rib-eye. Second cuts, like brisket, are good for cooking at lower temperatures for longer.

But how does one make sure the meat does not overcook and becomes too hard to chew?

“The best way is to touch it, with clean hands of course. The harder the meat gets, the more cooked it is. If cooking a steak, take it off just when it bounces back slightly to the touch and let it rest.”

Marinades tenderise meat/poultry and packs flavour, however, if using lemon juice or salt, one must be careful as over-marinating “will cook your meat”. Marinating meats for an average of two to three hours is often enough, but it depends on the size and cut of the meat.

“In summer I like my marinades to be fresh. I use plenty of soft herbs like coriander and mint, zest of lime and, of course, plenty of ginger and lemongrass and quite Asian – and plenty of good quality extra virgin olive oil,” says Gravina.

If you plan to use some of the marinade as a sauce on the cooked food, reserve a portion separately before adding the raw meat, poultry or seafood. To avoid bacterial contamination of cooked meat, make two batches of marinade: use one batch on the raw meat before grilling, then toss, and use the other batch as a finishing sauce or dip after the meat is cooked.

Cooking fish may be a bit tricky because it might get stuck to the grill.

“The best thing to do is to either oil both the fish and grill, or else cook the fish in foil, al cartoccio, which will preserve all the juices and “makes it safer and easier,” suggests Gravina.

Once ready, food, especially meat and poultry, should be kept warm until served. One may place it on a higher shelf on the barbecue or on the sides.

“All meat should rest before serving but not kept out for a very long time as this will attract insects and pests, especially if you’re a good chef,” he quips. As regards other food popular at barbecues, one needs to be careful with the high-risk foods such as rice, where bacteria can multiply quickly if kept in a warm environment. Coolers are highly recommended.

Asked whether modern alternatives to rice, such as quinoa or bulgur wheat can also pose a danger, Gravina says that anything that is precooked prior to a BBQ “can be high risk, to a certain extent”.

“Most foods that are high in protein may be the main cause of food poisoning. The best way is to cook your food and bring it to a lower temperature as fast as possible. Always travel with a cooler and try not to leave your food in the sun and make sure it’s covered.”

Vegetables are not that popularly cooked at beach barbecues but may be a healthy alternative or an uncommon side dish to accompany your sausages or meat.

“Aubergine is fantastic on a grill. Just take a whole one, season it and wrap it in foil. It will go super soft and gooey. Just serve it with bread, local ġbejna and fresh basil. Amazing stuff!”

Here’s a fresh and versatile summer marinade which goes well with fish, chicken, lamb or even beef. The ingredients are:

Where can I organise my barbecue?

Here is our regular update on where you can organise your barbecues this summer. Regulations have remained almost the same since last year.

• Baħar iċ-Ċagħaq: Groups of over 10 people have to ask for a permit from the Naxxar local council. The cost is €7 or €11.65 to have amplified music.

• Birżebbuġa: Only two areas are designated for barbecues: one in Qajjenza, a little further down from San Luċjan Tower and in the Wied il-Buni area between the Boċċi club and the Freeport. No permit is required. 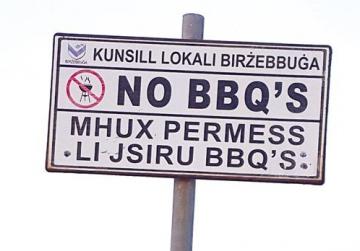 • Ġnejna Bay: Barbecues are permitted on the sandy beach only. Groups of 15 and more people need to get a permit from the Mġarr local council which costs €7 and leave a deposit of €20 as a guarantee that the beach will be left in a pristine condition and that no inconvenience is caused. The deposit is refundable one week after the BBQ. Music needs to kept at a low volume and switched off by 11pm. Tents and gazebos are not permitted.

• Għajn Tuffieħa (Riviera): The above conditions apply, but first one needs to get a permit from Gaia Foundation which may ask for a deposit. The amount varies, depending on the size of the event.

• Golden Bay (Il-Bajja tal-Mixquqa): A permit, costing €10, is required for groups of 15 and over from the Mellieħa local council. A further permit is required for a sound system or generator.

• Marsascala: Barbecues can be held all along the coast except for the sandy beach at St Thomas Bay and the salt pans area at Żonqor Point. Everyone is encouraged to apply for a permit against no fee from the Marsascala local council which will provide you with litter bags.

• Marsaxlokk area, including Delimara, Xrobb l-Għaġin, St Peter’s Pool, Kalanka and Il-Ħofriet: Anyone organising a BBQ needs to get a permit from Marsaxlokk local council. From one to 25 persons, the fee is of €3, while a group of 25 to 50 incurs a fee of €20.

• Mellieħa area, including Għadira Bay (Mellieħa Bay), Armier, Little Armier, Mġiebaħ Bay, Torri l-Abjad, Paradise Bay and Mistra: Barbecues can be held, except on piers and pontoons, in all these areas except Mġiebaħ Bay. However, at Għadira Bay, barbecues can only be held in a designated area between the two sandy beaches forming the bay. A permit is required from the Mellieħa local council for groups of 15 and over, and the cost is €10. A further permit is required for a sound system or generator.

• Sliema: Barbecues can be held all along the coast except for Fond Għadir. However, wardens may ask for ID cards for surveillance purposes and to deter people from littering. Groups of more than 50 people are not permitted.

• St Paul’s Bay area, including Xemxija, Buġibba and Qawra: Barbecues can be held all along the coast except for places of historical, archaeological or natural value, and at least 50 metres from hotels, restaurants, bars and kiosks. Also, BBQs are not allowed at the Buġibba perched beach, Salina Park and Kennedy Grove. A permit from the St Paul’s Bay area for groups of 10 and over is required and the fee is of €7.