They might not feature at the G7 or similar high-profile economic platforms but the oceans have globally assumed considerable economic importance. In fact, a marine ecosystem valuation conducted by the World Wide Fund (WWF) estimates the overall value of key ocean assets at US $24 trillion, propelling the oceans to seventh place among global economies on the basis of gross marine product. 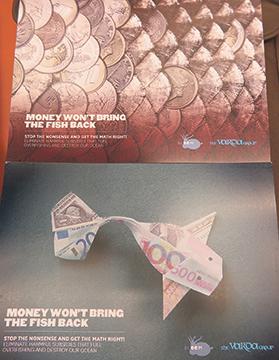 Some poignant messages from the UNCTAD forum.

Global fish production was estimated at 171 million tons in 2016, supplying around 20.3 kg/capita per year and 17 per cent of global animal proteins and essential micronutrients. Around 59.6 million people were employed in fisheries and aquaculture in 2016, and some 200 million direct and indirect employment opportunities occur along the fish and seafood value chain.

Furthermore, fish and seafood are one of the most traded food commodities. Some 35 to 38 per cent of the world production enters international trade, generating US$ 152 billion in 2017. Over 50 per cent of this trade originates in developing countries whose net trade income (export – import), valued at US$ 37 billion in 2013, is greater than the net income of most other agricultural commodities combined.

Such an economic prowess is testimony to the burgeoning economic activity our oceans are witnessing as the much-touted tenets of the ‘Blue Economy’ and of ‘Blue Growth’ steam ahead. This enhanced economic activity generated by our oceans, in turn, places an even greater onus on environmental considerations.

The Sustainability Development Goals (SDGs) are a set of 17 over-arching goals replacing the previous Millennium Development Goals (MDGs), encompassing compelling issues such as world poverty, access to education and clean water, gender equality, peace and development, and even, through SDG 14, the “conservation and sustainable use of the oceans, seas and marine resources”. The implementation deadline for a number of trade-related SDG 14 objectives, namely 14.4 (the regulation of overfishing and the phasing out of IUU [Illegal, Unregulated and Unreported] fishing) and 14.6 (the termination of detrimental subsidies that promote overfishing), is looming – 2020.

Against this backdrop, the United Nations Conference on Trade and Development (UNCTAD) organised in Geneva the Second Forum on Trade-Related Aspects of SDG 14.

The Commonwealth Secretariat was conspicuously pro-active during the forum. For instance, as rightly underscored by the Secretary-General of the Secretariat, Patricia Scotland MP, a number of Small Island Developing States (SIDS), members of the Commonwealth, would deserve the description of ‘large marine area nations’ in view of the disproportionately large marine areas these countries are endowed with. Ms Scotland cited the example of the Bahamas, whose 14,000-square-kilometre land area is eclipsed by its 700,000-square-kilometre marine area, constituting a land:marine ratio of 1:50.

The Maltese islands could be classified in the same league, given that the 25-nautical mile Fisheries Management Zone (FMZ) of our archipelago is almost 40 times the sizes of our land area.

At the last Commonwealth gathering in London, the Blue Charter, with its eight cornerstones and corresponding champion countries (ocean observations, ocean acidification, marine plastic pollution, ocean and climate change, aquaculture, blue economy, coral reef restoration, and mangrove restoration), was unveiled. Malta and the International Ocean Institute (IOI) have a vast repertoire of training and capacity-building experience that could be put to good use in the Blue Charter.

As rightly underpinned by a number of speakers at the forum, 80 per cent of all global trawling is conducted by just five countries, and 11 gargantuan seafood companies control 40 per cent of the most commercially-valuable fish species. Such a disparity and lack of equity in sharing the ‘commons’ is mirrored when it comes to the race to patent different Marine Genetic Resources (MGRs).

The major motivation fuelling this race is the potential that these genetic resources contain Biologically-Active Molecules (BAMs). BAMs include anything from widely used proteins, such as proteins for health supplements (including the new fad of immune system stimulants) and therapeutic drugs (such as anti-tumoral and arthritis treatment drugs), to a myriad of other novel applications. A recent review of the current status of MGR patenting reveals that claims for such patents have so far originated  in only 31 of the 194 countries comprising the global political firmament, with 10 countries dominating 90 per cent of all patents lodged for marine genes and, more poignantly, three countries (the US, Germany and Japan) featuring in 70 per cent of such patents.

My participation to the UNCTAD forum was as director of the IOI Malta Training Centre and as the Maltese Ambassador for Ocean Governance. Malta is one of just a clutch of countries to have designated an ocean ambassador, with the other countries in the same league being Norway, Sweden, France and Singapore.

In my intervention, I homed in on biodiversity conservation issues, flagging the current global indifference to the consequences of the ongoing biodiversity crises and to the hazards to deep-sea species that seabed mining will constitute.

The need to stringently apply the precautionary approach within fisheries management plans; the need to actively support artisanal, small-scale fisheries in preference over large-scale, industrial fishers; the need to actively investigate alternative marine sources of protein (including gelatinous species and waste fish biomass, and tuna offal); and the need to transpose and implement Access-to-Benefit Sharing (ABS) provisions, as included within the Nagoya Protocol of the Convention on Biological Diversity (CBD), all featured in my intervention.

The ABS provisions are instrumental in ensuring that the benefits emanating from the commercial exploitation of novel marine resources are equitably shared between host countries, local people and multinational companies.

Ambassador Peter Thomson, UN Special Envoy for the Oceans, who chaired the forum, informed the gathering of two highly relevant parallel processes, namely the Biodiversity Beyond National Jurisdiction (BBNJ) and the Mining Code process, the latter being conducted by the International Seabed Authority. The BBNJ process involves the review of  United Nations Convention on the Law of the Sea (UNCLOS) so as to include provisions for the conservation and sustainable use of marine biological diversity in Areas Beyond National Jurisdiction (ABNJs), a byword for the high seas, where such provisions currently do not apply.

A poignant comment by Ambassador Thomson takes the biscuit as the take-home message: “Everything else besides climate and the oceans is just a passing parade.”

For further information about the UNCTAD forum visit http://unctad.org/en/pages/MeetingDetails.aspx?meetingid=1831 .