Malta’ s ordeal in World War II was a continuous struggle for survival as the island was besieged by the Axis forces. Food, ammunition and fuel were severely rationed due to the convoys failing to reach the island. In August 1942, time was running out rapidly. A target date was fixed in the eventuality of surrender but this was kept top secret, known only to the governor, the Viscount Gort.

British PM Winston Churchill was determined not to abandon Malta. As part of Operation Pedestal, which was to be the most important and decisive relief convoy, Churchill requested US President Theodore Roosevelt for help by sending the fastest and the largest tanker with a capacity of 120,000 barrels of oil afloat.

Roosevelt readily obliged, just as he had done in May 1942 when Churchill asked him for the supercarrier Wasp, which brought the first Spitfires to Malta.

The tanker was the Ohio, built in 1940 by Texaco Oil Company. It was part of a convoy which consisted of 14 merchantmen and an escort of 70 naval craft, which included two battleships, four carriers, 33 destroyers, 24 submarines and minesweepers. It was by far the largest convoy to enter the Mediterranean.

On August 10, the convoy passed through the Strait of Gibraltar, the worst gauntlet the Axis air forces and underground craft could bring them in narrow waters. Then followed “one of the bloodiest and most ferocious air-sea engagement of the entire war” (Charles A. Jellison: Besieged-The World War 2 Ordeal of Malta 1940-1942).

The tanker received a torpedo in its bow. Several fires broke out during attacks by the German Luftwaffe but were put under control. It was on a five-degree list, having taken tons of water. Some 90 miles from Malta, its engines gave out. Then it was towed − a slow process − when it received a hit on its forward extremity. As a last resort, two destroyers − HMS Penn and HMS Bramham − propped it up between them.

Only four of the cargo carriers, namely Port Chalmers, Melbourne Star, Rochester Castle and Bristol Star, made it to Malta. The Ohio limped into the Grand Harbour; skipper Captain Dudley George Mason had brought the Ohio through a “bomb alley”.

Before its actual arrival, there were rumours that a convoy was set for Malta. When it arrived, men, women and children cheered the ships as they came in harbour. Gort was among the people, in the midst of the craters and ruins of the Upper Barrakka Gardens, welcoming the ships of the convoy. In between clapping and cheering, the waving of flags and handkerchiefs, there were moments of deep silence. The rattle of the anchor chains gave one a chocking feeling of deep silence.

The people living in the harbour areas raised their cries: “Wasal il-konvoj”, “Dieħel il- konvoj” (the convoy is here, the convoy is entering harbour).

People climbed on rubble heaps that were once happy homes

People climbed on rubble heaps that were once happy homes. They manned the blitzed bastions. A band played on battle-scarred Fort St Elmo. An old woman was heard saying: “Imbierka s-sapjenza t’Alla − wasal” (Blessed be God’s wisdom – it has arrived).

On Friday, August 14, 1942, Times of Malta, which did not miss a day of publication throughout the siege years, dedicated its leader to the convoy heroes.

“Through the mercy of Providence and the courage of our seafarers, Malta has been given succour in an hour of need, borne by people and garrison alike with fortitude and an abiding faith in the justice of our cause. Ships of convoy, bearing a precious argosy of supplies and war cargoes, have reached the island. They are now in harbour. The strain of what is known as the Second Siege of Malta is a hard one, of which the hours which precede the arrival of the ships, is the hardest part of all.”

As soon as the convoy ships entered Grand Harbour, unloading of the precious cargo started immediately. The Ohio had secured to its mooring near the base of the harbour. Pumping crews boarded the ship and began unloading, under an umbrella of RAF aircraft; anti-aircraft in the harbour zone were on the ready. Gort visited the dockyard and all other areas where unloading was taking place.

The convoy had started its perilous journey to Malta from Clyde in Scotland with 85,000 tons of supplies, of which only 53,000 tons reached destination; the rest finished at the bottom of the Mediterranean. 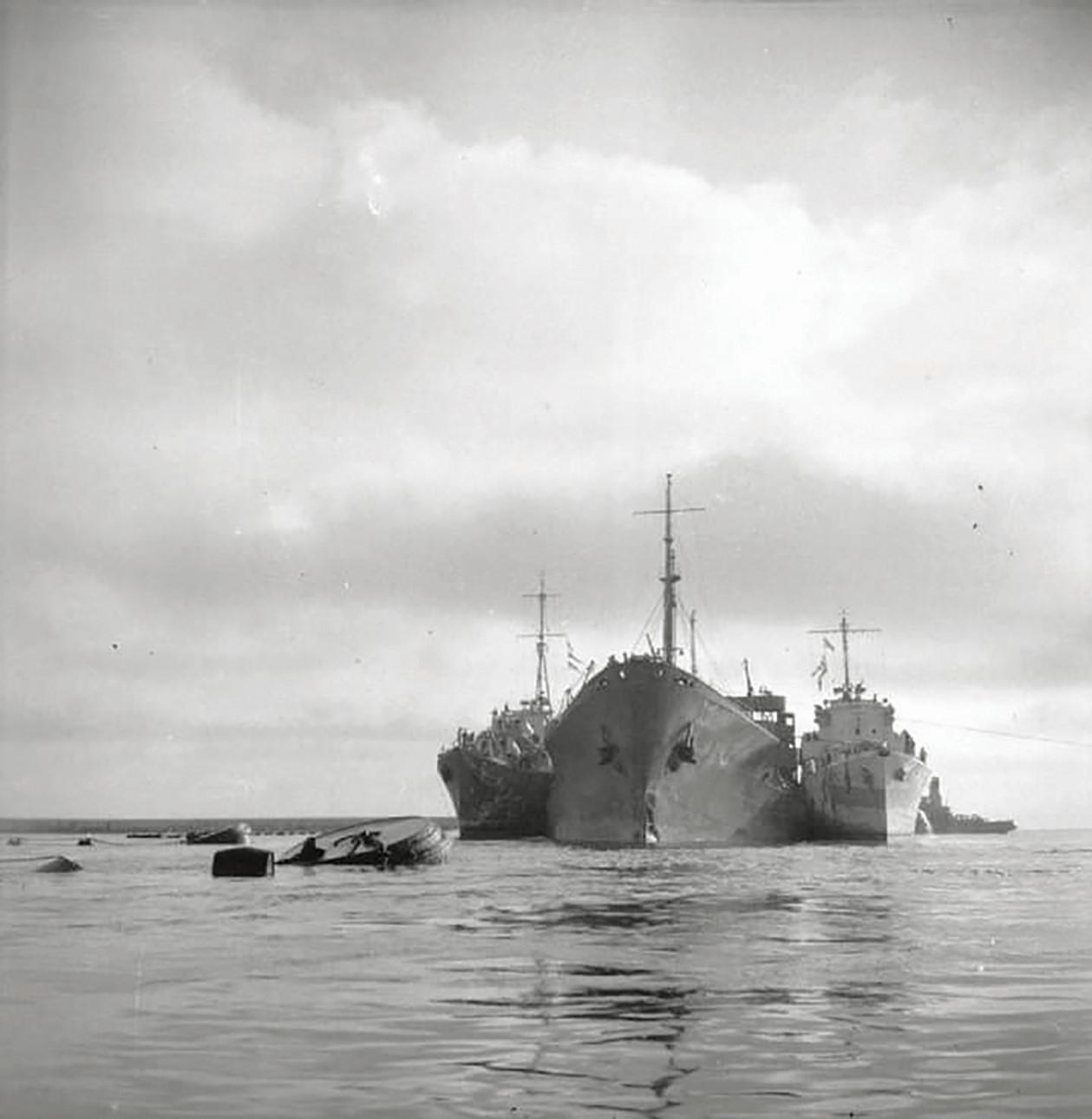 Ohio propped and supported by two destroyers as it limped towards Malta.

An important notice was put up for the attention of the public. It read: “During the unloading of the convoy which is now in port, all members of the public are requested NOT to enter the Grand Harbour area. Goods from the convoy in port are being unloaded and placed in stores and dumps in various parts of the island. The public is warned that it is forbidden to loiter near any storage dumps.”

On Saturday, August 15, 1942, the feast of the Assumption of the Blessed Virgin Mary, one of the holiest of all religious celebrations for the Maltese, took place without any of the traditional manifestation of rejoicing.

Mgr Emanuel Brincat, who was then the archpriest of Senglea, one of the harbour cities that was most battered, wrote in his reminiscences: “So that day will never fade from our memory nor gratitude will never relinquish our heart. It was a day of rescue from our misery, a day of relief, a day in which we breathed more freely a new breath of life. For we had nothing left before the 14th of August, that year 1942 and now fresh supplies came as by a miracle, as a godsend from heaven.”

Having been completely emptied of its cargo, the Ohio was lain, resting on a shallow bottom, beneath the rock bastions of Fort Ricasoli in Rinella Creek. I used to see her from our house roof in Valletta across the harbour.

On September 19, 1946, the hulk of the Ohio was towed out to sea and sunk by gunfire. The paddle-tug Robust was there to see it go.

The Ohio has become almost a part of Malta’s ‒ and siege history.