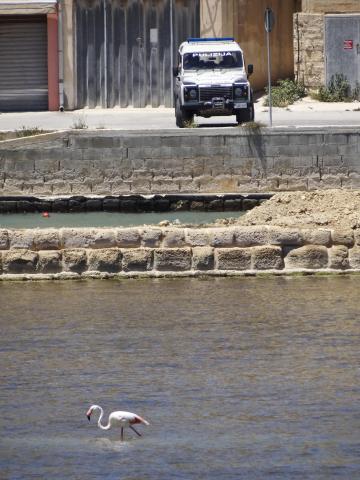 The Flamingo under the watchful eye of the police.

The society said the Greater Flamingo is highly prized by poachers, especially in its bright pink breeding plumage.

The flamingo can be easily seen from the coast road next to the saltpans and people have been able to enjoy watching the bird as it fed in the shallow water and slept, tucking its head under one wing (Flamingos sleep standing up - not always on one leg).

Salina is an attractive stop-over for flamingos as they fly between their breeding and feeding grounds around the Mediterranean, thanks the ideal conditions of the shallow salty lagoon and mud flats, but it is far from being a safe haven, BirdLife said.

Last autumn, Salina was visited by an adult Greater Flamingo and three juveniles (her offspring), which probably roosted in the area. At the time, local residents reported hearing gunshots in the middle of the night and the four birds were not seen again.

On another occasion, two injured juvenile flamingos that had been shot by a man hunting from the coast at Qawra Point landed in the vicinity of the saltpans. Although BirdLife Malta staff and volunteers, together with the ALE and AFM, rescued both birds, they later died of their injuries.

BirdLife Malta and the ALE will continue to keep a watch over the bird while it remains in the saltpans and local residents were urged to help by keeping an eye on the flamingo and report any suspicious activity to the police.