The tiny state of San Marino voted Sunday to allow abortion in a historic referendum result that will bring the predominately Catholic nation in line with most of the rest of Europe.

Some 77.3 per cent of voters approved a motion to allow the termination of a pregnancy up to 12 weeks.

After that, abortion would only be allowed if the mother’s life was in danger or in the case of foetal abnormalities that could harm the woman physically or psychologically.

The picturesque republic of San Marino, situated on a mountainside in the centre of Italy, is one of the last places in Europe along with Malta, Andorra and the Vatican to have a total ban on abortion.

In traditionally Catholic Ireland, abortion was made legal in 2018, also after a referendum.

“It’s a victory against the Catholic Church who were our opponents and tried everything to prevent this result.”

There were celebrations at Sunday’s result among members of the San Marino Women’s Union (UDS), which had initiated the referendum and campaigned for a “Yes” vote against the governing party and the Catholic Church.

“It’s a victory for all the women of San Marino, over the conservatives and reactionaries who believe women have no rights,” UDS president Karen Pruccoli told AFP.

“It’s a victory against the Catholic Church who were our opponents and tried everything to prevent this result.”

More than 35,000 people were eligible to vote in Sunday’s referendum, around one third of them based abroad. The turnout was 41 per cent, some 14,500 people.

In the absence of opinion polls, nobody had wanted to predict the result in a country where the influence of the Church remains strong.

The campaign to vote “No” on Sunday was led by the ruling Christian Democratic Party, which has close ties to the Catholic Church.

“It’s a defeat for a country that has always defended life,” the party’s deputy secretary Manuel Ciavatta told AFP after the result.

But he said the government would propose a law within six months to implement the abortion change, that would then be put to parliament.

"Women who choose to have an abortion typically cross into Italy, where it has been legal for more than 40 years"

“We respect the voice of the voters,” he said, while adding: “Our party will do everything it can to help women to ensure they are not left alone.”

Currently, abortion carries a penalty of up to three years in prison for the woman and six years for the doctor who conducts the procedure.

However, nobody has ever been convicted.

Women who choose to have an abortion typically cross into Italy, where it has been legal for more than 40 years.

Before the result came in, Francesca Nicolini, a 60-year-old doctor and member of UDS, had argued: “The majority of young people are on our side, because it’s an issue that directly affects their lives.

“It’s unacceptable to view as criminals women who are forced to have abortions.” 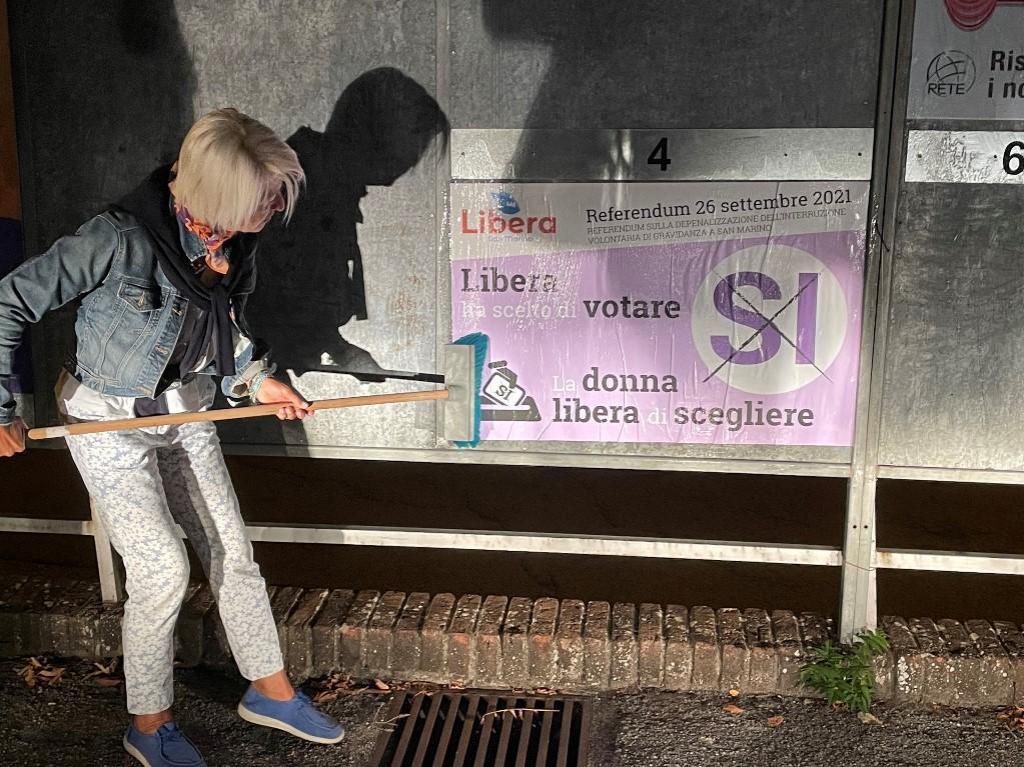 Pro-abortion campaigner, and doctor, Francesca Nicolini puts up posters on the night of September 9, 2021 in San Marino at the start of the campaign for the September 26 referendum on the legalisation of abortion.

The vote signals a radical change for San Marino, where the ban dates back to 1865 and was confirmed by both the fascist regime in the early 20th century and then again in 1974.

Figures from Italy suggest few women from the tiny state cross the border to take advantage of the abortion laws there.

Between 2005 and 2019, only about 20 women a year from San Marino had abortions in Italy, falling to 12 in 2018 and seven in 2019, according to official Istat data cited by the campaigners against abortion.

This is still too many for opponents such as Rocco Gugliotta, a 41-year-old warehouse worker, who asked: “Why should only the mother decide?”

However, Alfiero Vagnini, a 65-year-old cook, was among the “Yes” voters, explaining: “On many subjects, San Marino is behind. We need to become a more modern country.”