The official said that 10 other refugees were wounded when artillery fire and air strikes hit the town of Maydee along Yemen’s border with Saudi Arabia in Hajja province, a stronghold of the Iran-allied Houthi group that a Saudi-led Arab alliance has been bombing for eight weeks.

Brigadier General Ahmed Asseri said there was no coalition activity in the area. “If the report is correct, it would be the responsibility of the Houthis, who have a big presence in the area,” Asseri said.

UN Chief Ban Ki-moon on Wednesday announced peace talks for Geneva on May 28 to try to find a way out of the crisis .

Rajeh Badi, spokesman for Hadi’s government, said consultations were held by the government in the Saudi capital Riyadh over timing, agenda and preparations for the conference. Badi cast doubt on Houthi intentions to join the talks, saying the leader of the group Abdel-Malek al-Houthi, had scuttled the plan by calling in a speech for a holy war and stepping up conscription.

The Saudi-Yemen frontier has in some cases become a frontline between the two sides, and the Houthis’ Al Masira TV channel broadcast footage on Wednesday it said showed its fighters entering a Saudi border post after being fired on by Saudi tanks and helicopters.

“Saudi military hardware was deployed, but after a few moments they vanished, fleeing the Yemeni advance,” the channel said.

Asseri said the Houthis regularly target Saudi positions along the border and that Saudi forces respond. 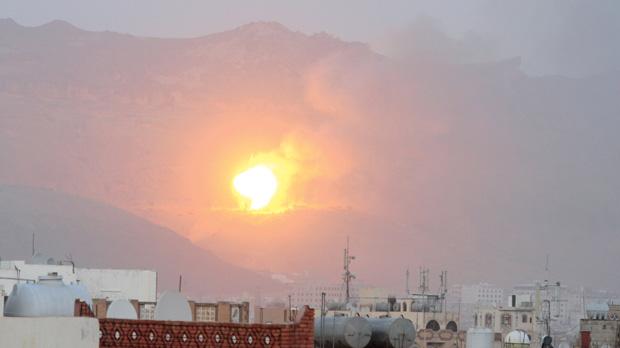 An explosion is seen from the rooftops of Yemen’s capital, Sanaa, during an air strike by the Saudi coalition.

Residents and local fighters opposing the Houthis said air strikes hit a southern air base controlled by the militia and their positions outside the southern city of Aden yesterday. Tribal and militia fighters in Yemen’s south support the Arab campaign and back President Hadi, who lives in exile with his government in Saudi Arabia.

Arab air strikes and heavy ground fighting seized the central city of Taiz and tribal sources said they made gains against the Houthis in the far northern province of al-Jawf, where the Houthis said Saudi-led air strikes killed 15 people.

An Iranian aid ship bound for the Houthi-controlled Red Sea port of Hodaida in Yemen appeared to be headed to Djibouti for inspection yesterday. Iran’s Deputy Foreign Minister Hossein Amir Abdollahian said the ship would submit to UN inspections in the Horn of Africa country, avoiding a potential regional showdown between Riyadh and Tehran.

The Iran Shahed had been escorted by Iranian warships, and Saudi-led forces have enforced inspections on vessels entering Yemeni ports to prevent arms supplies from reaching the Houthis.