A company owned by MaltaToday managing editor Saviour Balzan is involved in a government advertising blitz in favour of the controversial Central Link project in Attard.

Mr Balzan’s company Business 2 Business Ltd was given a €16,800 direct order by Ian Borg’s ministry for the provision of “media advisory services” in 2018.

Media organisations traditionally keep a strict separation between their editorial and commercial functions. 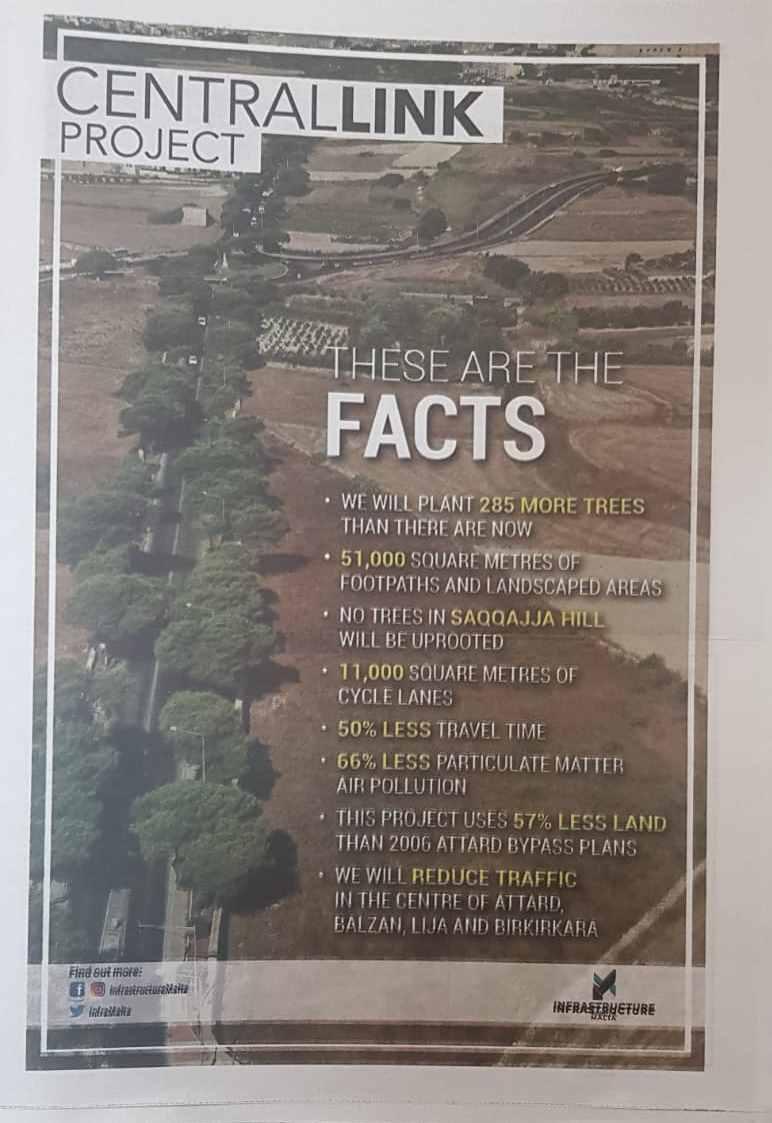 The Infrastructure Malta advert that appeared in Sunday newspapers.

The MaltaToday managing editor is the sole director, shareholder and legal representative of Business 2 Business, which was set up in 2016.

Just last week, Media Today, Malta Today's publisher was booking adverts in various media houses, including Malta Today, for Infrastructure Malta’s ‘These are the Facts’ campaign about the uprooting of some 500 trees.

Apart from the fees received from Infrastructure Malta as their media booking agent, Mr Balzan’s company also takes a cut on government adverts it books in other news organisations, including Times of Malta.

Mr Balzan also interviewed a client of his, Infrastructure Malta chief Frederick Azzopardi, last week on his programme on the national broadcaster, Xtra.

At no point during the programme did the MaltaToday managing editor declare that Infrastructure Malta is a client of his.

Mr Balzan’s company registered a turnover of over €300,000 that same year.

Business 2 Business Limited has received over €29,000 for the “consultancy” contracts, awarded in three six-monthly tranches since January 2018.

Times of Malta is also informed that Business 2 Business has offered its PR services to FMAP, Malta’s powerful tuna lobby.

A press release sent out by the company heralded the launch of an education campaign by FMAP to operate in a “sustainable manner”.

This press release received coverage in MaltaToday and its Maltese-language sister paper Illum, without any indication of Mr Balzan’s role in the media release.

‘I no longer run newsroom day-to-day’

Contacted for a reaction, Mr Balzan said that over the years, he had divested himself from the day-to-day running of the MaltaToday newsroom and was not physically present for editorial meetings, nor was he physically present in the newsroom.

“My companies have new business branches which include audio-visual services, publishing, design and now we also serve as an advertising agency, recognised even by the Times, and provide monthly reputable polling to various private companies, agencies, all political parties and lobby groups.

“We also book for clients according to what clients’ request. The advert your journalist refers to also appeared in The Sunday Times and in all other media in an equal fashion or according to the popularity of a medium.

“We have diversified our business to allow for revenues to reinvest to allow for producing high quality independent journalism”, Mr Balzan said when asked about the Infrastructure Malta advert he booked into his own newspaper.

He said he was not a consultant to the minister but his company's polling unit provides a traffic survey every month.

"We provide a polling service to numerous clients including political parties, banks and private companies."

No interference in ‘editorial slant’

Mr Balzan assured that he did not interfere in “editorial slant” and had never applied pressure to have one word from an editorial or an investigative article axed.

“When the occasion arises and I submit an article for publication, it goes through the same protocol of fact checking like any other article by our executive editor.

“The final say is with the executive editor. Unlike other companies our shareholders do not represent big business, unions, or foundations with diverse assets”, Mr Balzan said.

Questioned about declaring his conflicts of interest during his taxpayer-funded programme Xtra, Mr Balzan said he always ensures that all differing views are given a fair deal.

I do not mince my words when it comes to putting forward pertinent questions. I have never ever interviewed anyone as sponsored content.- Saviour Balzan

“More importantly, I do not mince my words when it comes to putting forward pertinent questions. I have never ever interviewed anyone as sponsored content. This has been the case since I have operated a hard talk programme on TVM since 1999,” Mr Balzan said.

Questions sent to PBS on Sunday about whether Mr Balzan had ever declared his commercial interests were not answered by the time of writing.