Porsche describes the GT2 RS as ‘simply the most powerful 911 ever built by Porsche’ – and that simple synopsis says it all, really. 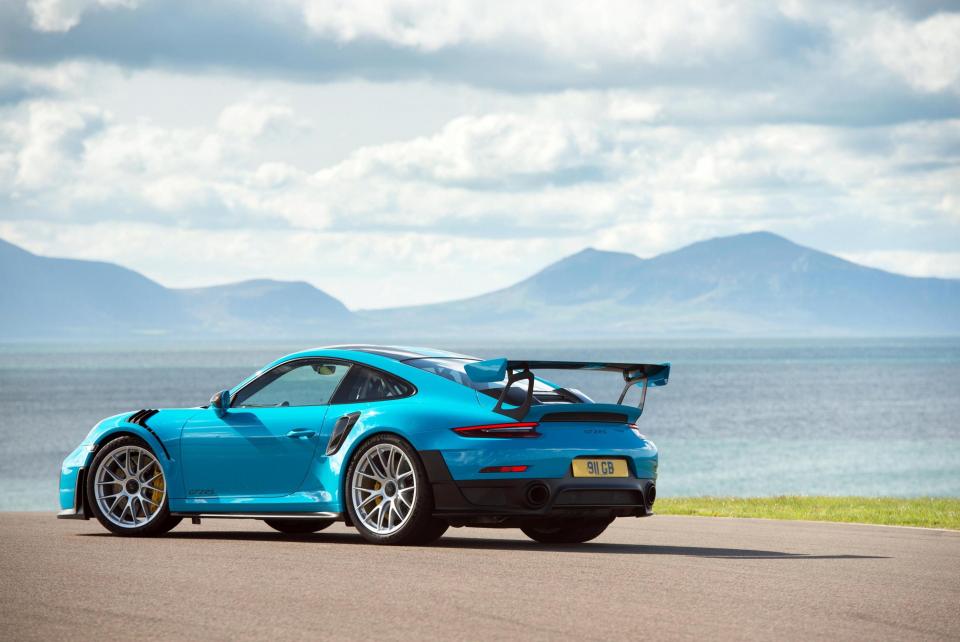 With almost 690bhp through the rear wheels, the GT2’s performance levels are staggering. It has big, fat tyres to get all that power into the road, and if you can get the rubber hooked up it’ll catapult you from 0-60mph (0-97kph) in about 2.6 seconds.

You could call it a race car for the road, but most of Porsche’s 911 race cars couldn’t keep up with this monster… 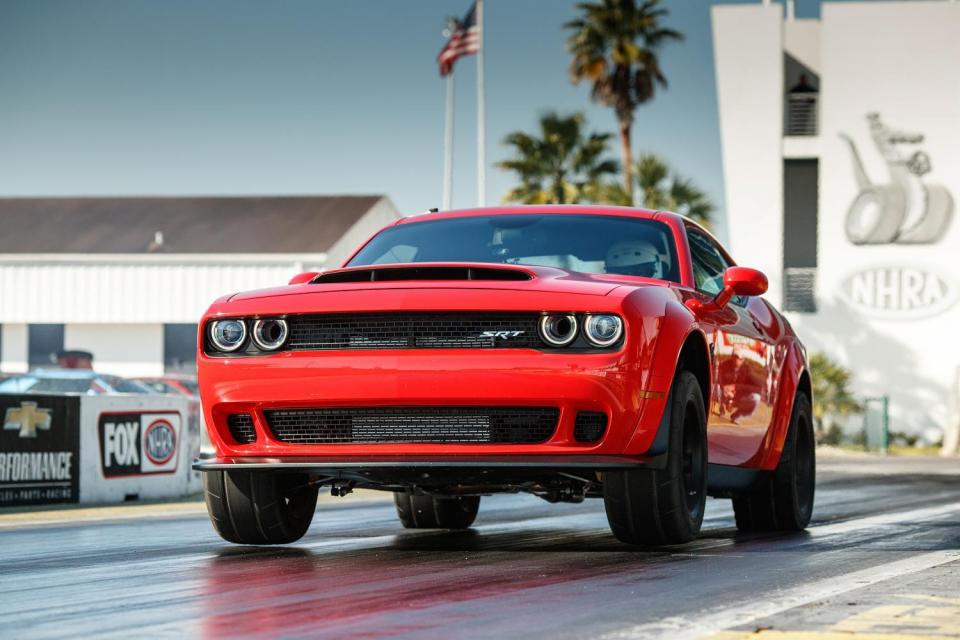 Dodge is keeping the American automotive dream alive. First, it released the high-performance Hellcat version of its Challenger coupe with 717bhp, but then it went one better with the bonkers Demon.

This gets an uprated version of the Hellcat’s supercharged 6.2-litre V8 engine punching a whopping 830bhp to the ground through the rear wheels. And that’s without sophisticated electronics to get the power down, making it quite the burnout machine.

The Caterham Seven is an old-school model, considered one of the purest forms of motoring. It’s about as simple as a car can be, with few fripperies in the name of comfort or safety, it’s essentially a tube for a human with an engine and wheels attached. 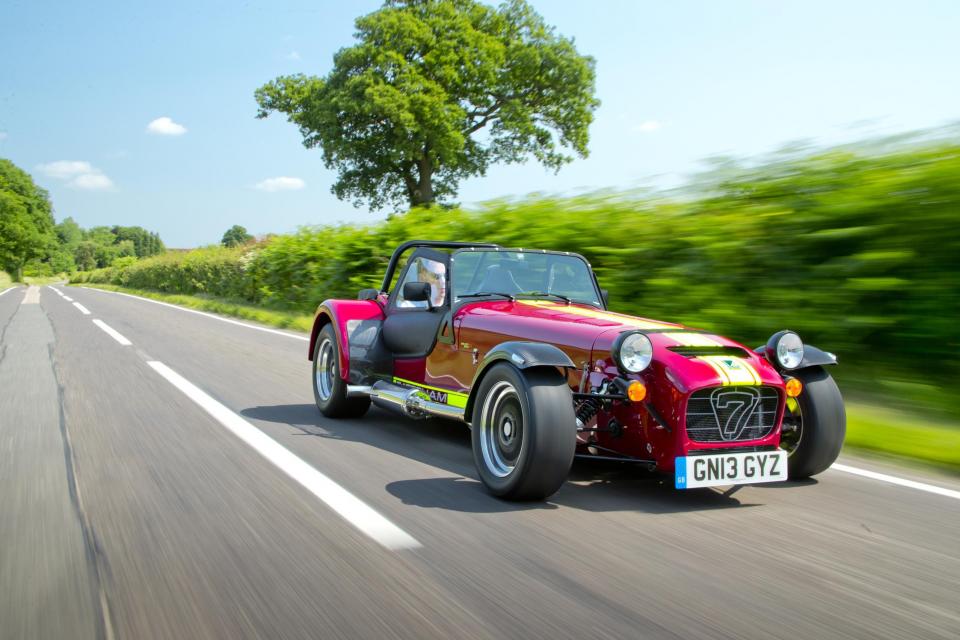 Even lesser-powered versions are a bit hairy, but this particular model sports a supercharged 2.0-litre Ford engine making 311bhp. In a car that weighs about half a tonne, that’s a power-to-weight ratio of 620bhp per tonne – hence the name.

The result is acceleration on par with the two cars above. With no windscreen or doors. 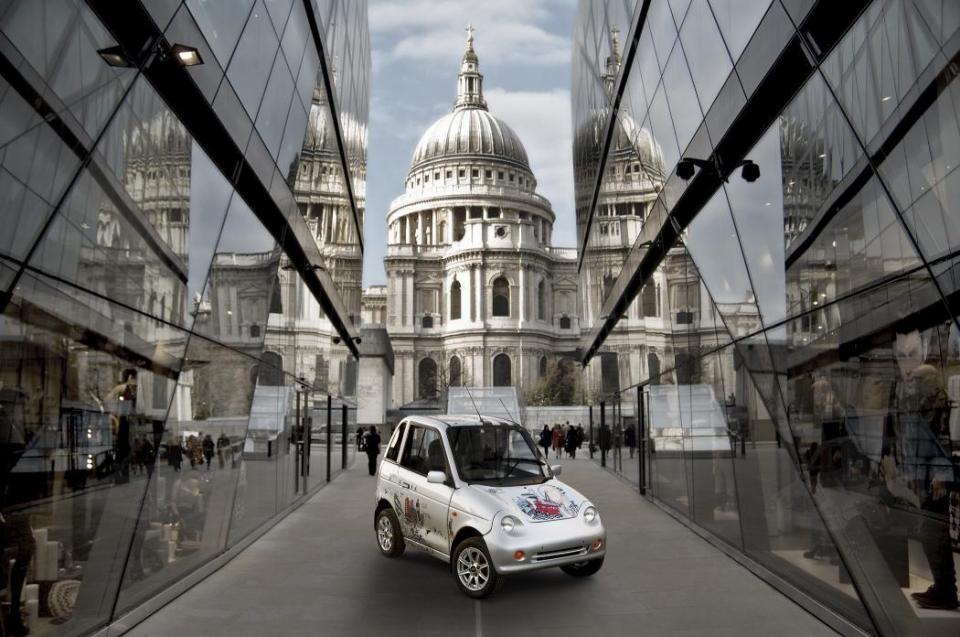 If most of the cars on this list are terrifying because of performance that could kill you if you stop concentrating for a second, the G-Wiz is nerve wracking for a different reason.

This small electric car was briefly popular with eco-conscious city dwellers because of its zero-emission motoring and small size. However, it’s so slow that moving from A to B requires forethought and momentum, and it’s incredibly unsafe.

Once the G-Wiz was crash tested it folded like origami, which makes darting between trucks and buses on the streets of London all the more daunting.

TVRs already have a fearsome reputation, but the Cerbera Speed 12 takes the cake. Built initially to race at Le Mans before rule changes killed that ambition, there are plenty of stories about its development. 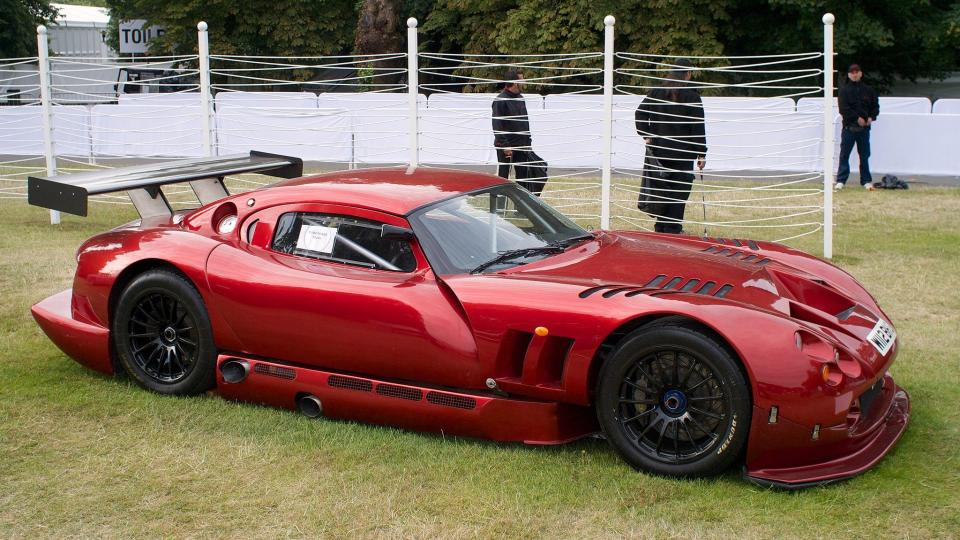 For example, the V12 was essentially two of the firm’s straight-sixes stuck together, with rumours suggesting it put out more than 1,000bhp after it broke a dyno designed to measure output. Official documents say it made 800bhp, but the true estimate was more like 960bhp.

The car was killed off after TVR boss Peter Wheeler took a development mule home one night and declared it too wild for the road. Just one example was built and sold to a carefully chosen enthusiast. A journalist who was allowed to drive it described it as ‘terrifying’. 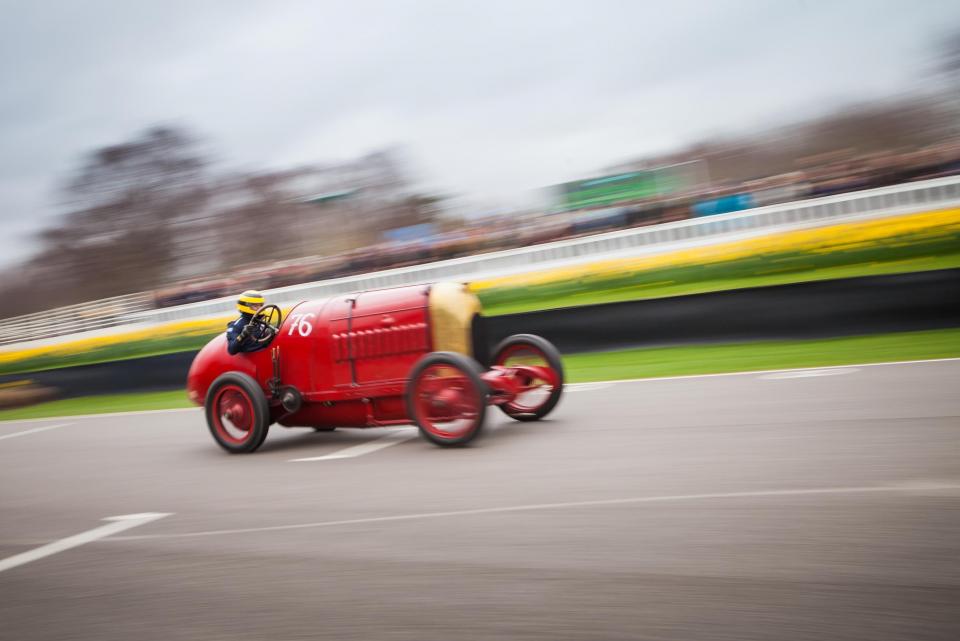 Built in 1910, most of the performance figures for the Fiat S76 aren’t particularly mind-blowing. For example, it has a four-cylinder engine making about 290bhp. However, that engine was a whopping 28.5 litres.

It was built to achieve a land speed record, and while it earned the unofficial title after it hit 132.27mph in one direction, it failed to record a speed in the opposite direction to confirm the record.

Just two were built, and one has been restored to its former flame-spitting glory. With flames spitting out from the side of the car, it’s easy to see how it earned the nickname ‘Beast of Turin’.

This incredible Frankenstein’s monster of a car is a combination of parts that, on the face of it, shouldn’t work. But testament to the skill of the American tuner Hennessey’s engineers, the Venom GT earned itself the title of world’s fastest production car in 2014 with a top speed of 270mph. 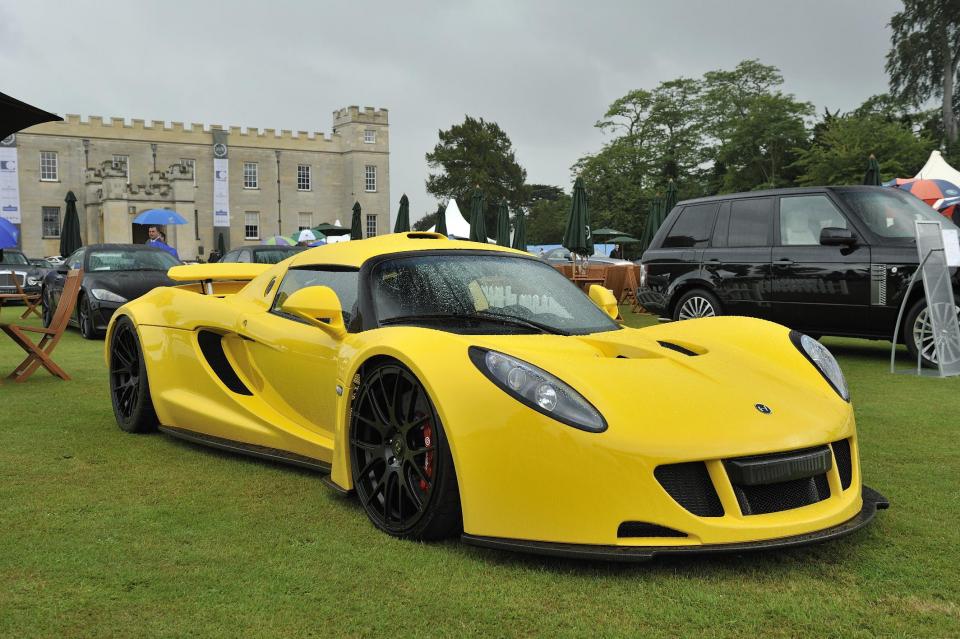 It has since lost that title, but its construction is no less fascinating. It used a heavily modified version of the Chevrolet LS V8 engine common in American muscle cars, shoehorned into a lengthened Lotus Elise body.

The shop’s owner, John Hennessey, told American car magazine Road and Track that the Venom was born after he joked about putting a 1,000bhp engine in an Elise, and had it sketched. The joking stopped and the team ended up with a record-breaking, 1,244bhp weapon on its hands.

The Porsche Carrera GT has earned a reputation as one of the most sought-after supercars ever built. That was largely born out of the fact that it was, quite simply, a handful to drive – Lewis Hamilton’s dad crashed one, for example. 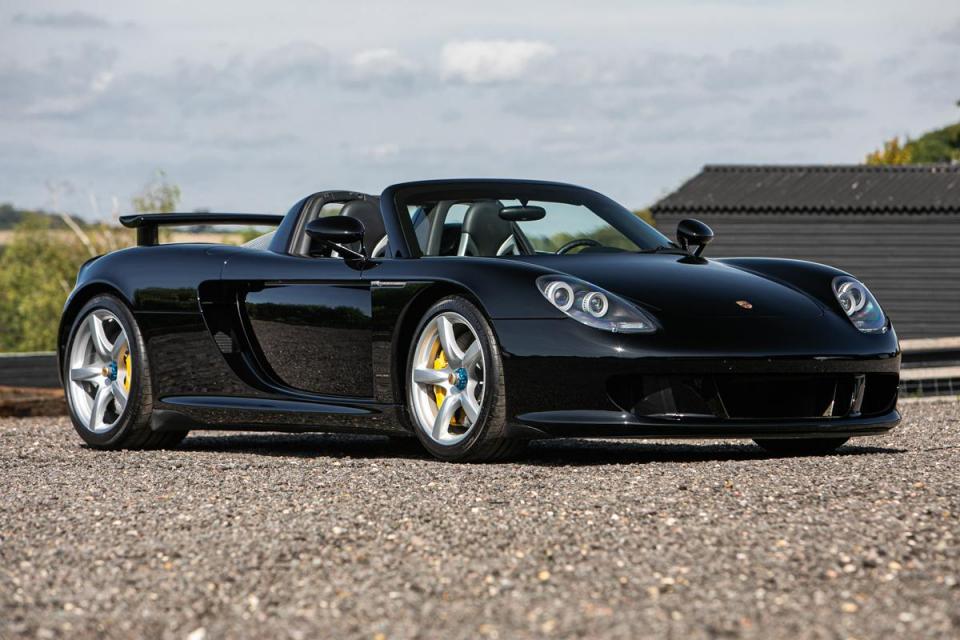 It came from a stillborn Le Mans project, which shows it’s a serious bit of kit. Power came from a monstrous 5.7-litre V10 making 612bhp and thanks to plenty of carbon-fibre the whole car weighs less than 1.5 tonnes.

The Shelby Cobra story is great, if only because it’s the kind of thing that would probably never happen today. American racing driver Carroll Shelby wanted to build his own cars and asked British firm AC to sell him a version of its Ace sports car that could fit a V8 engine.

After a couple of iterations, Shelby ultimately worked with Ford to create the now-iconic Shelby Cobra 427. It used a modified chassis and a 425bhp 7.0-litre engine with a top speed of 164mph.

Unsurprisingly, for what was essentially a very well-built but small and lightweight kit car featuring a massive American muscle engine, it wasn’t easy to drive. Those brave enough to drive it got a thrilling ride, though. 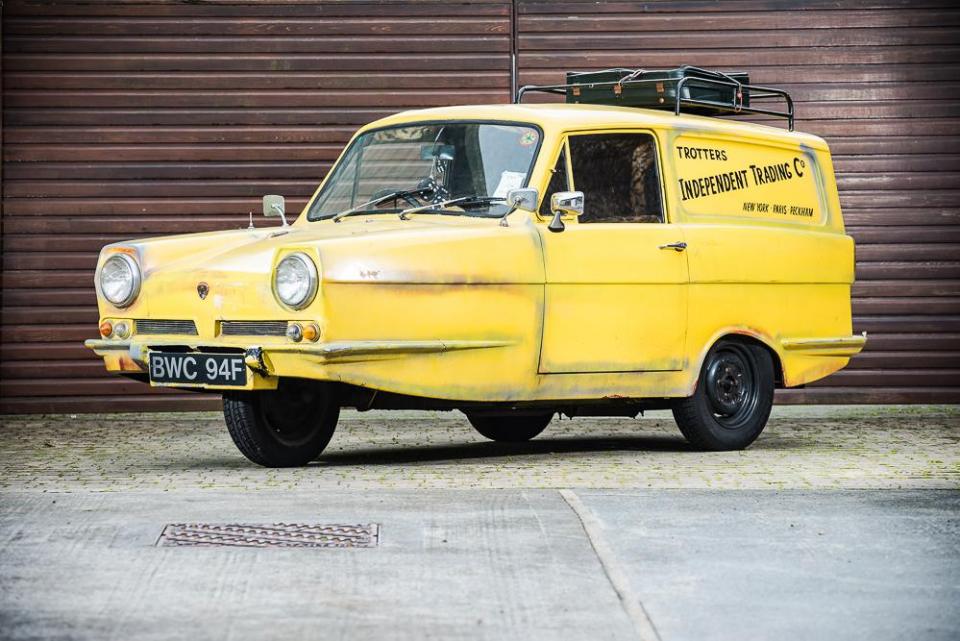 Another car not exactly known for its blistering performance, the Robin is a small, three-wheeled hatchback that’s often found itself the butt of jokes. It’s perhaps best-known in recent years for its appearance on Top Gear, when Jeremy Clarkson showed a recurring joke where the unstable car would roll over every time he turned a corner…