Works of art, particularly those found in our churches, give us a hint of God’s beauty. Sacred art does not only manifest the capabilities of the artist, but also exalts the community’s level of faith, since the beauty of what is human leads us to reflect on what is spiritual. This was the two-pronged achievement of Senglea-born Maltese sculptor Antonio Chircop.

Religious iconography in Malta is very old, and one finds countless such works of art in our churches. However, at the beginning of the 17th century, very few parish churches thought a titular statue should figure among their art treasures. Eventually, statues of particular devotion started being carried in processions. First among these was Senglea, which since 1618 had a statue of Maria Bambina (the Nativity of Our Lady), the oldest titular statue in Malta. The custom grew more popular until it became the norm for each parish church to have a titular statue. 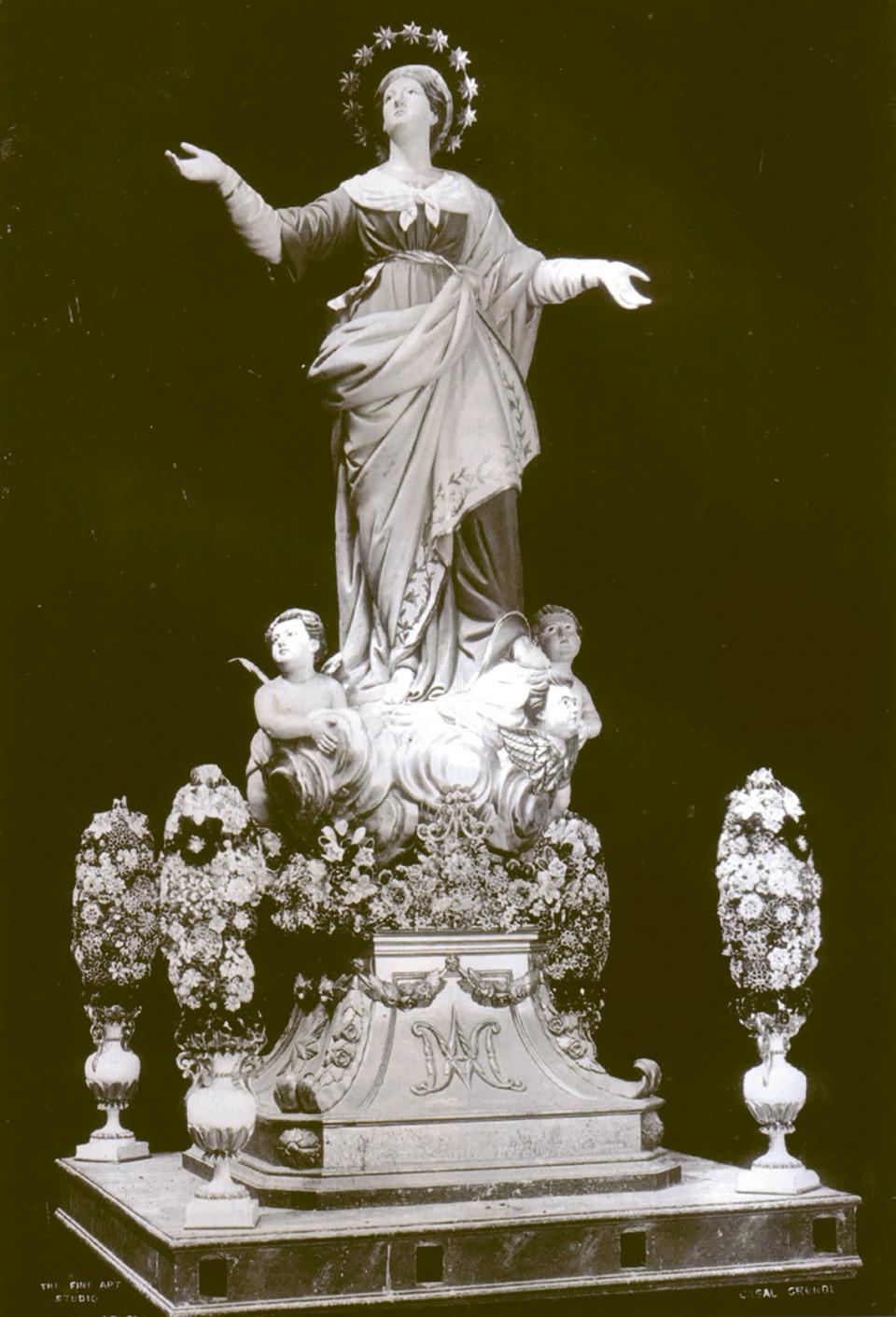 The statue of the Assumption as originally sculptured for the Qrendi parish church in 1837. Photo: St Mary’s philarmonic society, Qrendi

During the first half of the 19th century, a group of Maltese sculptors gave life to the practice of religious statues sculpted in wood. Although Malta was going through difficult times economically, this artistic development took place because the Church and its confraternities always remained valiant promoters of Maltese artists such as Alessandro Farrugia (1791-1871), Pietro Paulo Azzopardi (1791-1875), Salvatore Dimech (1768-1831), Mariano Gerada (1766-1823) and Antonio Chircop (1798-1869).

One of the main promoters of religious sculpture was Bishop Francis Xavier Caruana (1759-1847). In fact, many statues which today are carried shoulder-high during processions were enshrined during his episcopate (1831-1847). These statues show us that those who carved them were well trained in their craft, and able to achieve high artistic standards.

On June 21, 1786, two young Sengleans: Paolo Chircop, son of Michelangelo and Polixena née Caruana, and Francesca, widow of Vincenzo De Natali, daughter of Antonio Quiglio and Anna, filled with ardour and supported by the love of their relatives, made their matrimonial vows in Senglea’s collegiate church, in front of Canon Salvatore Bonnici, Senglea’s first archpriest. Francesco Salvatico and Felice Grima acted as witnesses. The couple had six children. The youngest, Antonio, was born on  April 28, 1798, and baptised the next day at Senglea collegiate church by Canon Philippo Duranti. 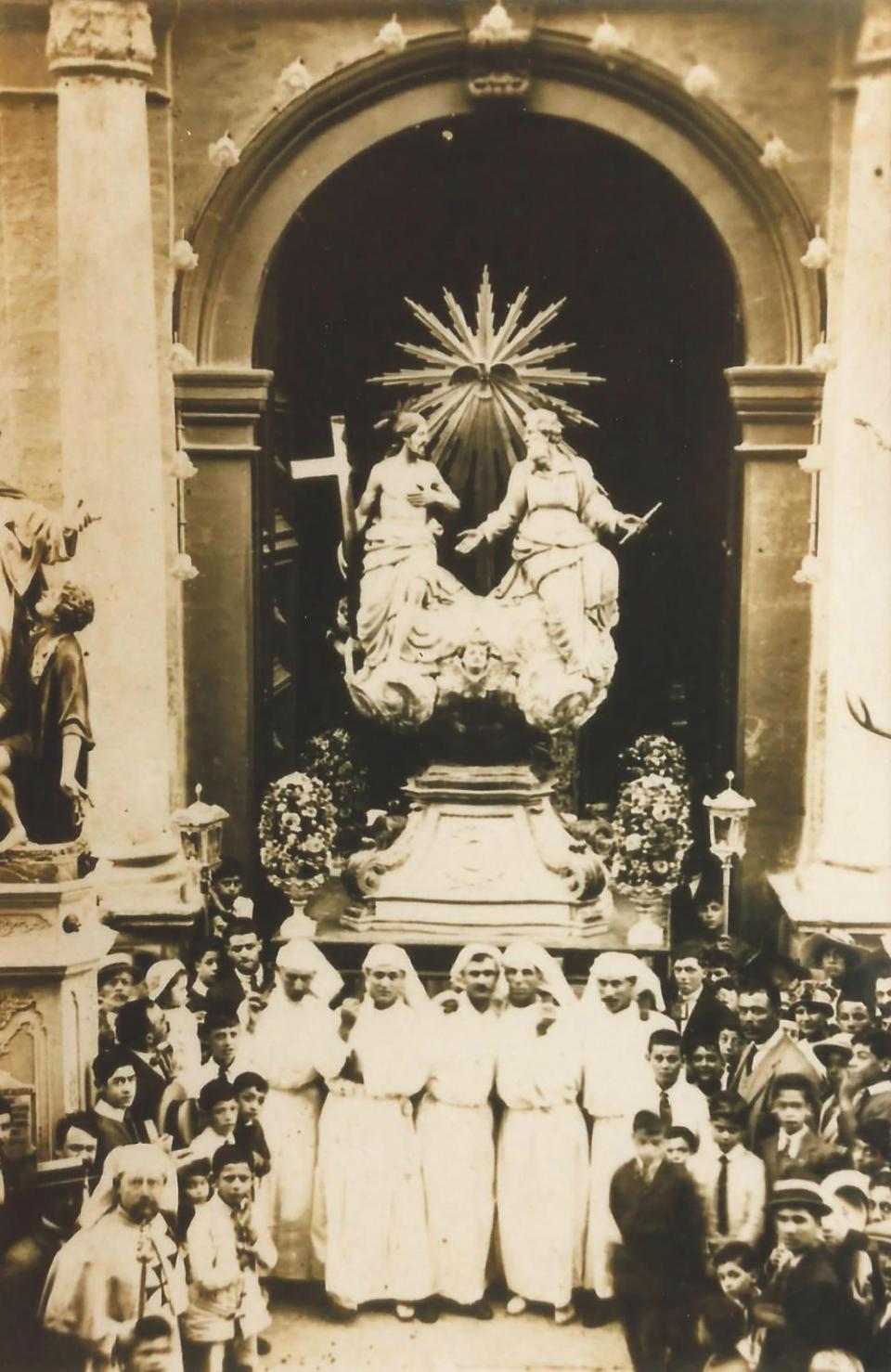 The statue of the Blessed Trinity being taken out of Senglea collegiate church as part of the 1919 procession.

In Malta bil-Gżejjer Tagħha, Vol. III (1865), historian Pietro Paolo Castagna writes that Antonio Chircop studied under architect and painter Giorgio Pullicino (1779-1851). The latter was a professor of design at the University of Malta. In addition, he also had a studio next to his home at 117, Strada San Paolo, Valletta, where he taught design and painting. Pullicino’s studio was attended not only by apprentices but also by artists who had already established themselves. All this clearly indicates that Chircop had, as his teacher, an important operator in the field of art in our country.

Castagna tells us that Chircop used to sculpture statues of the apostles to adorn altars and candlesticks. He also carved about 200 decorative figureheads for ships. As noted before, Chircop was an important figure during a renaissance of religious sculpture in wood. This was indeed a golden epoch with regard to religious sculpture in our country.

Among the most notable examples, one can mention three images of the Assumption of Our Lady, namely that found in Gudja, produced by Vincenzo Dimech in 1807, the one in Għaxaq, sculptured by Mariano Gerada in 1808, and the other at Mqabba, completed in 1837 by Alessandro Farrugia.

The people of Qrendi wished that their parish, also dedicated to the Assumption, would be graced with a titular statue of unusual beauty, an original artistic masterpiece. Their choice for the commission fell on Chircop, who was still 38 years old. It was to be a statue showing the Virgin elevated on the clouds while being raised to heaven. The Qrendin wanted a truly unique statue from Chircop.

Chircop’s statue is exhibited at the Żabbar Sanctuary Museum

The statue was commissioned by the parish church, and the sum of 450 scudi from the parish funds was to be given to the sculpture no later than eight days after its delivery. 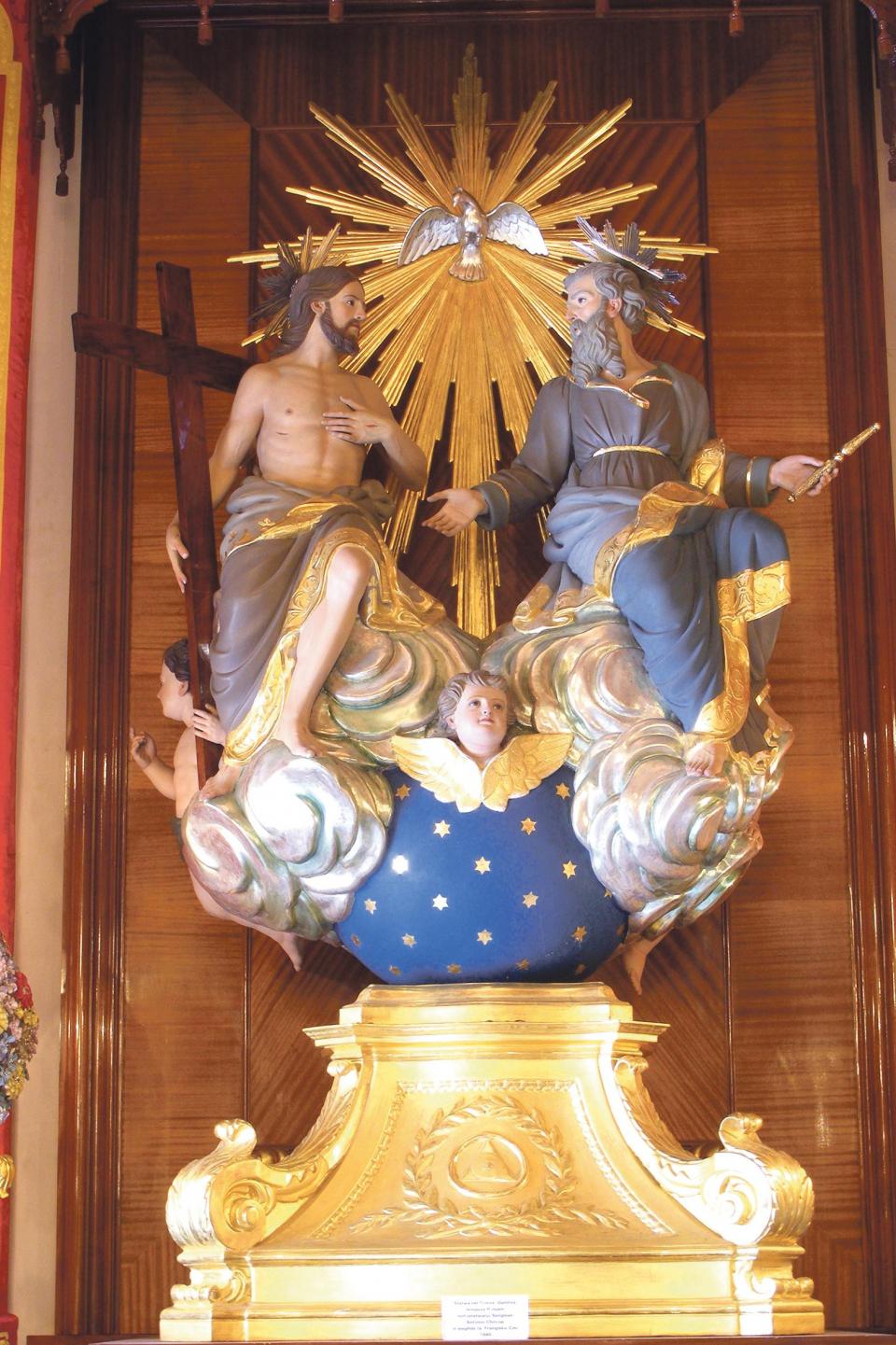 The statue of the Blessed Trinity as it is seen today at the Senglea basilica. Photo: Mark Micallef Perconte

The contract was signed in Qrendi on December 18, 1836, before Notary Vincenzo Carcas. Don Ferdinando Magri, the priest in charge of the Veneranda Lampada – the parish’s general income and expenditure – signed the contract on behalf of the parish church.

In August 1837, the statue of the Assumption was welcomed at Qrendi parish church amid the joyful ringing of bells and the great fervour of the people. The artistic statue was carried in procession for the first time through the streets of Qrendi on August 15, 1837.

A certain Francesco Cini, born in Senglea on February 23, 1796, son of Angelo and Anna née Zammit, had nurtured a special devotion towards the Blessed Trinity. Having undergone bouts of ill health, he decided at the age of 42, in 1838, to make a vow to God to provide the money for a statue representing the Holy Trinity.

The statue of Our Lady of the Rosary, Żabbar (1865). Photo: Żabbar parish church

The statue, entrusted to Chircop, was to be a valuable one, carved in wood. After the statue was completed, it was privately taken to the church of Our Lady of Porto Salvo, Senglea, on June 12, 1840, and placed on the left of presbytery.

On the afternoon of the following day, Canon Leopoldo Fiteni, archpriest of Senglea, blessed the statue and the antiphon was sung. After that, a procession with the statue of the Holy Trinity carried shoulder-high by the members of the confraternity proceeded towards Senglea’s collegiate church. All the other confraternities, together with the clergy and the collegiate chapter, took part in the procession. That year, the liturgical feast of the Holy Trinity fell on June 14, and on that day, for the first time, the procession was held with this statue.

In 1851, Chircop sculpted in wood the statue of Our Lady of the Rosary for Gudja parish church. It was paid by Grazia Dalli, the sister of Don Giuseppe and Don Angelo. She also covered the expenses for the statue’s predella, the wooden base to which the statue was attached in order to be carried on the shoulders of the carriers.

Alas, some lamented that Chircop’s statue was somewhat heavy, and in 1922 it was replaced by another one made by the Gudja-born statuarian Angelo Dalli. It is sad and unfortunate that today, this statue of Our Lady of the Rosary is set aside, disregarded and almost forgotten, in the church of the Annunciation in Gudja. 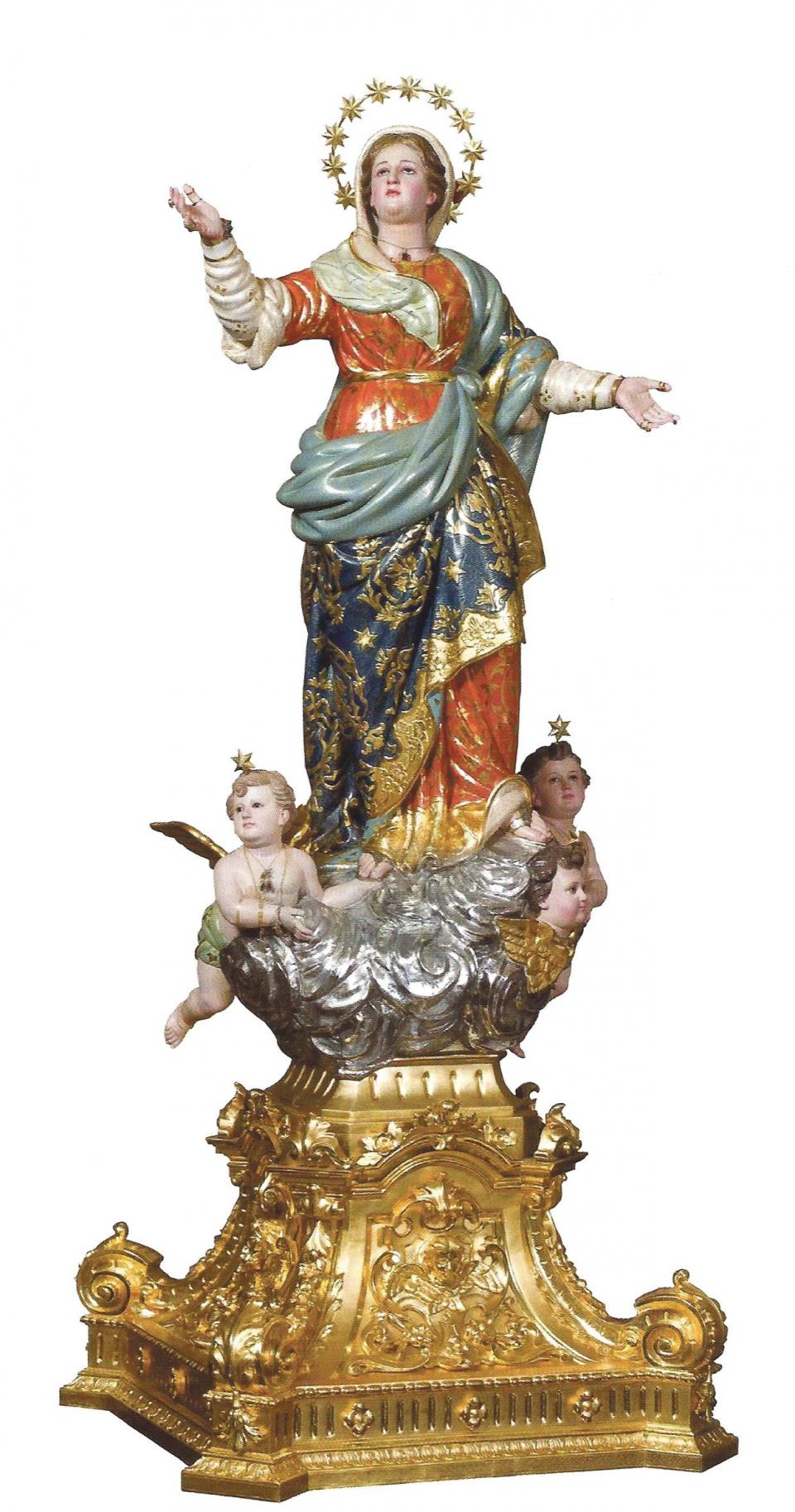 The Qrendi statue of the Assumption as modified in 1911. Photo: Joe P. Borg

However, in 1865 Chircop sculpted in wood a statue of Our Lady to be used by these two confraternities. This statue was only used for about 30 years as on July 29, 1894, a new papier-mâché statue of Our Lady of the Rosary, made by the Gallard et Fils Firm of France, was brough to Żabbar. Today, Chircop’s statue is exhibited at the Żabbar Sanctuary Museum.

Here, one has to point out that the statue of infant Jesus, standing next to his mother Mary, is artistically very similar to another statue located in the parish of Marsascala. This statue, which is also attributed to Chircop, is used annually for the feast of the Epiphany.

Chircop’s work for Żabbar is most probably created during the final phases of his artistic career.

The famous sculptor passed away aged 70 at his family home in Strada Concezione, Senglea, on January 1, 1869 – just over 150 years ago. He was buried at Senglea collegiate church.

Although we do not know much about his personality and character, he was undoubtedly one of island’s foremost sculptors of the 19th century whose works we can still admire.