Several thousand people called for justice in Sliema this afternoon in the second demonstration called by the Civil Society Network in the wake of the murder of blogger Daphne Caruana Galizia. 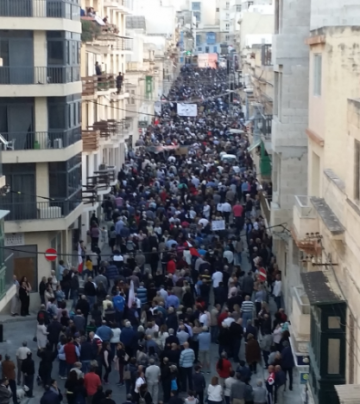 Ms Caruana Galizia was killed by a car bomb two weeks ago tomorrow. Her funeral will be held on Friday afternoon in Mosta.

The network was pressing its call for justice and for the Police Commissioner and the Attorney General to be replaced by persons appointed with the support of two-thirds of the members of parliament.

Those present for today's activity included several Nationalist MPs. No Labour MPs were seen. Labour MPs who took part in the first demo last Sunday had complained that the event turned politically partisan.

Some of those who took part today carried placards calling for resignations and for justice.

One placard said: 'We will not be silenced'. Some protestors plastered their mouths with tape as a symbol of attempts to silence free speech. Others carried laurel leaves, a symbol of courage and determination, and national flags.

The big banner unveiled last week showing a giant picture of the police commissioner now came accompanied by a similar one of the attorney general (see below).

Protesters also included Moviment Graffitti members, who highlighted their concerns about "PLPN unfettered control over every social and political space in Malta".

They said that while the police commissioner and Attorney General no longer enjoyed the public's trust and should resign, real change would require deeper probing and soul-searching.

"This is a crooked system which has created a rotten political and economic class, and it has been left to rot to the point of becoming deadly," they said in a statement.

The demonstration started near the former chalet and proceeded towards Amery Street, close to where Ms Caruana Galizia was raised. Several speeches were delivered at the end of the event. 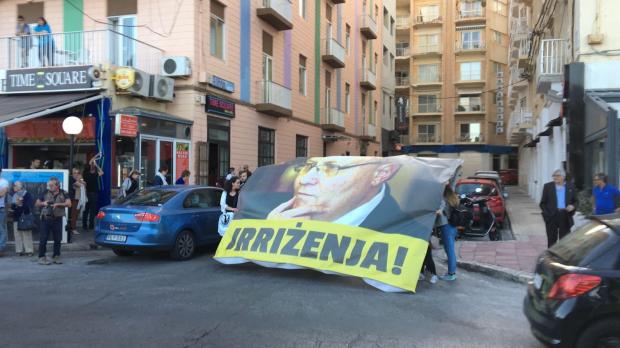 Lawyer Andrew Borg Cardona echoed the Civil Society Network’s demands that the police commissioner and the attorney general should be told to resign.

He also demanded that Home Affairs Michael Farrugia should be fired for having been seen with the commissioner and for implying that Daphne Caruana Galizia’s murder was ‘unlucky’.

Dr Borg Cardona expressed his regret that Ms Caruana Galizia was let down by 'being left alone'. Now it was everyone's duty to ensure that what she stood for was achieved.

“There is a surplus of opportunism and impunity, where the only important thing is to make a quick buck. Above all there is a surplus of partisanship, where everything is discussed in terms of red versus blue,” he complained. He called for constitutional reform that should seek to remove the disproportionate strength of the two parties. 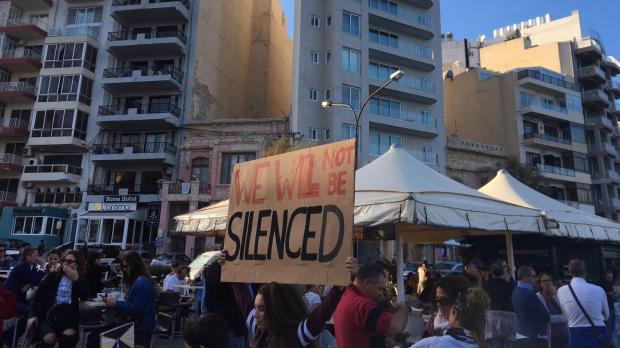 Blogger Jacques Rene Zammit, in a speech read by Antonio Tufigno, echoed the comments by Daphne Caruana Galizia that there could be no real justice without change, a change which would mean the rule of law applied equally to all. Civil society, he stressed, needed to show that it was sovereign. Society could not accept the present as the new norm.

Social activist Claudio Taylor East quoting Mother Teresa, urged those present to: ‘Let us give our hands to serve and our hearts to love.’ She urged MPs to set the example and provide dignified and moral leadership. The institutions also needed to achieve the standards expected of them in a democracy. 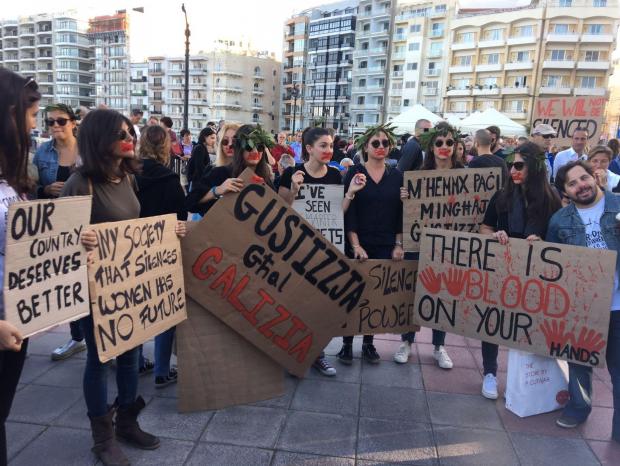 Josef Vella, UĦM genera secretary, called on society to rise from its stupor and show that their love for their country was above political or financial considerations. The attack of Daphne Caruana Galizia was an attack on all. This was a political murder which had taken place in the context of a series of scandals, circumstances where no one assumed responsibility and a climate where institutions were toothless.

This was a situation which society needed to remedy before it impacted the economy, and hence jobs. Because ultimately, a strong economy was only built on a strong society. There was, therefore, an urgent need for institutional reform to ensure there was proper separation of powers in the interests of the people.

A large number of those present for the protest later walked to the Love monument in St Julian's, where they chanted for justice.